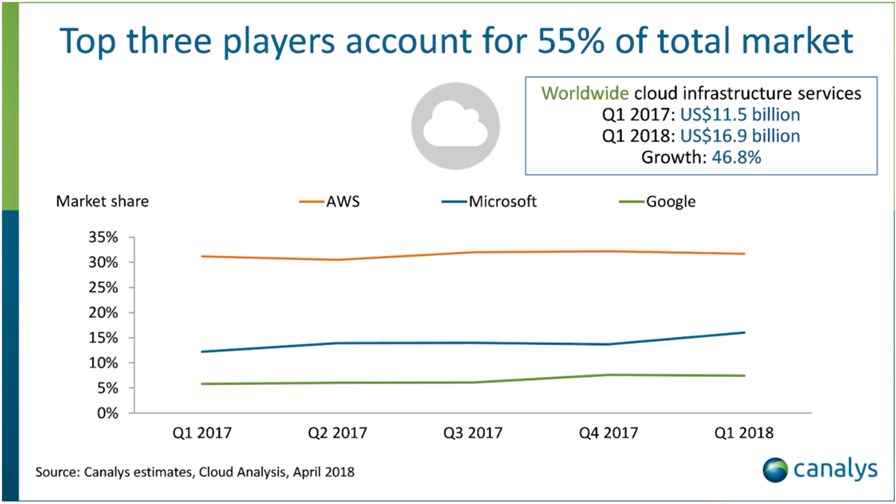 Microsoft is enjoying strong growth in the cloud market thanks to a continuing surge in demand for its Azure cloud services and its increasing success at moving its traditional computer users over to cloud-based versions of its applications.

Those cloud revenues have just played the major role in kicking along a healthy overall revenue and profit outcome for Microsoft in its latest quarter, with profits against the last year quarter growing by just over a third to $7.4 billion.

In particular, Microsoft has been actively moving clients to Internet-based versions of its productivity suite, Office 365, and its success there has played a big part in the cloud total which now comes to more  than $20 billion per year. Stellar growth in cloud is expected to continue as more companies pile into cloud applications and cloud infrastructure and that expectation of continued growth saw Microsoft’s share price lift by around 4 per cent.

Microsoft’s success reinforces a clear overall trend towards the cloud from corporate users. According to Canalys, worldwide spending on the underlying cloud infrastructure services continues to grow, reaching $17 billion in the first quarter of 2018 - that’s a  47 per cent increase on the same period last year.

In terms of the leading players (see chart above) in what is very much a scale market (the biggest cloudifier usually wins), Amazon Web Services (AWS) which got in first, has stayed ahead of its competition, growing even faster than the overall market at 49 per cent in the latest quarter. That revenue is nearly double that of the  number two, Microsoft, (up 93 per cent), which is growing much faster than AWS but from a lower base. Google came in third, up 89 per cent. That the big three are all growing faster than the market, implies that the cloud stragglers are being squeezed out.

They are, but Canalys thinks it’s discovered an overshoot in the cloud enthusiasm. It claims that while cloud adoption has been a key part of businesses’ digital transformation strategies, due to its multiple benefits of elasticity, scalability, on-demand provision of virtualized and container resources, and low upfront costs, a combination of complexity and uncontrolled user access to cloud technologies has led to customers underusing paid-for services and not fully realizing the return on investment.