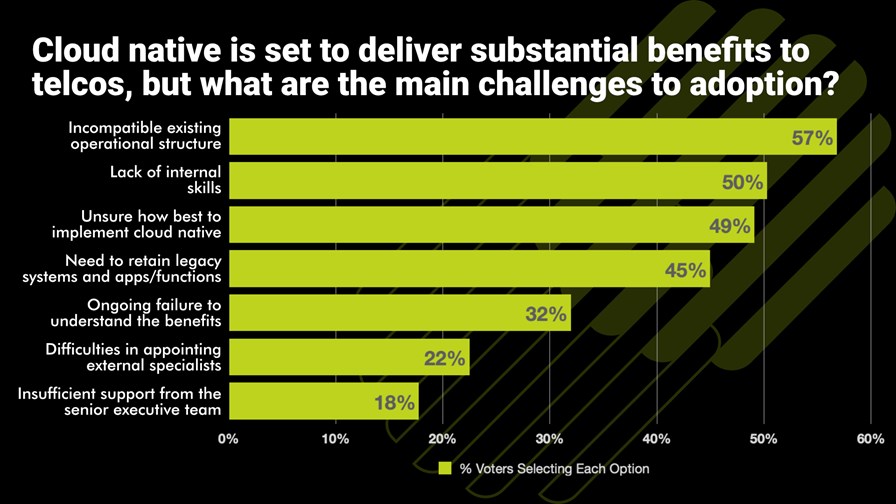 The cloud-native telco is becoming a reality, but the shift towards more cloud-oriented working processes and associated technology choices is being held back by a number of challenges, the greatest of which is the current operational setup of telcos, according to a poll held during TelecomTV’s recent Cloud Native Telco Summit.

The poll, which attracted almost 170 respondents, asked: Cloud native is set to deliver substantial benefits to telcos, but what are the main challenges to adoption?

Respondents were able to select as many options as they thought relevant, with ‘Incompatible existing operational structure’ garnering the highest support, cited by 57% of those who voted.

‘Lack of internal skills’ was also a popular choice, regarded as a major challenge to adoption by half of those who voted, followed very closely by the option ‘Unsure how best to implement cloud native’.

Clearly there is a lot of education still needed about how cloud native can best be adopted by network operators.

That the skills challenge attracted a sizeable vote will come as no surprise, given there is so much demand across all verticals for operational staff with cloud-native experience and know-how, and it will also likely surprise few people that the ‘Need to retain legacy systems and apps/functions’ also attracted a large number of votes, selected by 45% of those who voted.

What is perhaps surprising, though, is that only 18% of respondents believe that ‘Insufficient support from the senior executive team’ is a significant challenge to cloud-native adoption by telcos – maybe those management teams are a bit more clued up and ready to help their organisations make the transition to cloud native than many believe!

If you missed the summit, you can check out all the sessions and interviews on demand by visiting the Cloud Native Telco Summit page on the TelecomTV website.