Cloud native to be a telco mainstay: Poll 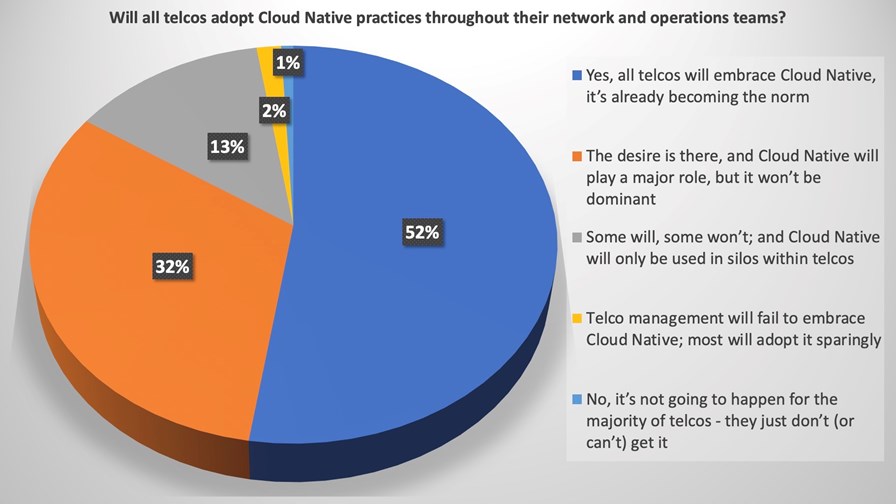 Telcos are embracing cloud native practices and are starting to reap the benefits of new operational processes and continuous development cycles: That much was clear from the discussions held during the recent Cloud Native Telco Summit and, as if to hammer home the message that cloud native is here to stay in telecoms, the results of an attendee poll made it clear that cloud native is set to sweep the service provider community.

More than 120 Summit attendees voted in the poll, which asked, ‘Will all telcos adopt Cloud Native practices throughout their network and operations teams?’

A majority of respondents (52%) voted for ‘Yes, all telcos will embrace Cloud Native, it’s already becoming the norm’, while a further 32% voted for ‘The desire is there, and Cloud Native will play a major role, but it won’t be dominant,” as the chart above shows.

The results are perhaps not surprising as the participants are, by the very fact they were attending a TelecomTV summit on the topic, ‘invested’ in the topic, but the overwhelming results show that after a few years of debate and some hesitation about an upheaval to telco operational processes, there is now a significant shift towards cloud native processes as edge computing and 5G core platforms become a reality and require a change in working practices and service lifecycle management.

That cloud native is now a day-to-day reality was also borne out during the summit’s panel sessions and during the service provider executive interviews conducted with senior decision-makers from Orange and Colt.

You can access and view all of the summit sessions right here (and it’s all free!).