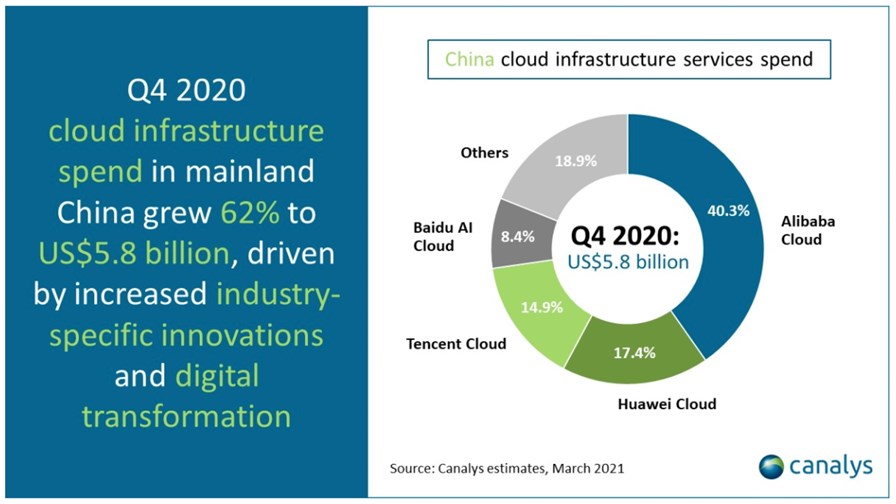 Cloud infrastructure services spend in China bounded ahead in the last quarter of 2020. As much of the rest of the world was still reeling from the impact of Covid-19, China was busy with its recovery. Canalys reports that the cloud market’s dollar-for-dollar expansion is the highest it’s ever recorded, a result of rapid recovery in the economy as a whole, topped up with prompt restarts of delayed cloud projects.

China is the second largest cloud market, after the US, and it exhibits some remarkable similarities. Like the US there’s a handful of giant hyperscalers and a dominant player, in this case Alibaba,  taking the AWS position with a 40 per cent market share. The runners up at this point are Huawei Cloud, Tencent Cloud and Baidu AI Cloud, maintaining 17.4%, 14.5% and 8.4% market shares respectively.

As in North America and Europe the cloud service providers in China have been credited extra points for their efforts in helping enterprises and government departments adopt services and distribute extra workloads into the cloud as the pandemic (and mild panic) took hold.

As a result the total cloud infrastructure services spending grew 66% in China and it’s expected that this sort of growth will continue for at least the rest of this year. In fact so buoyant is the China cloud market expected to become by 2022, that Microsoft has announced that it is to open a new cloud ‘region’ there for Azure via the company’s operating partner, 21Vianet.  A ‘region’ is essentially a collection of geographically dispersed (but not too dispersed) data centres able to link with each other across a high performance network at acceptably low latency to maintain data centre performance. That expansion by Microsoft is perhaps a sign that US companies view the ongoing froidure between China and the US under Biden as mostly performative - apparently neither side expects major commercial hostilities to break out. Microsoft’s Azure plans should see it double the size of its China cloud portfolio over the next few years.