The telecom death trap: is there an easy way out? 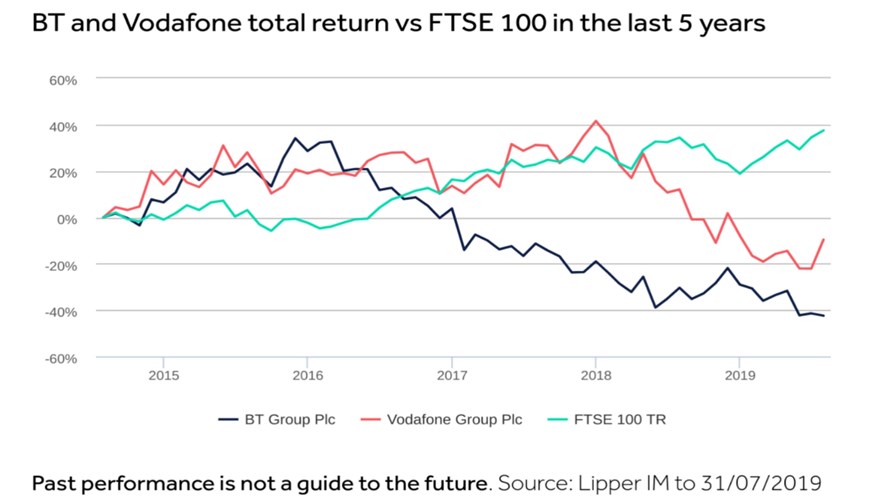 Viewed from the balance sheet, UK telecoms is in a bad way. UK ‘investment supermarket’ for private investors, Hargreaves Lansdown, has succinctly set out the big problem in a news story it has circulated to its investors. It’s included a nice diagram that illustrates it as well.

It points out that there are only two big UK-listed telecom companies - Vodafone and BT -  but they’re a major slice of the UK market and they’re both underperforming the UK’s ‘big cap’ company average. There appears to be something systematically wrong with the telecom provider market. And it’s not just the UK - most big telcos, to one extent or another, are in a similar state

Hargreavges Lansdown’s take will come as no surprise to anyone actually in this market, much less TelecomTV viewers and readers. The problem of never-ending capital outlay to feed a mature market that demands ever-lowering (or at least, standstill) pricing has been one of the main talking points on our site and through our video interviews for, well, years.

Not many companies have to spend so much on their asset bases as the telecoms do, says Hargreavges Lansdown’s advisory arm.

“Over the last 5 years BT and Vodafone have, on average, spent about 15% of revenues on capital expenditure. The average for the FTSE 350...is around 7-8%.

“A large capital expenditure bill isn’t always a bad thing... but the problem with the telecoms' spending is that they’re only really topping up their asset base. Both BT and Vodafone have seen their depreciation and amortisation expenses outstrip their capital spend. This means they’re spending heavily just to stand still.

And the spending doesn’t stop there.

“Mobile providers have to buy frequencies to transmit mobile data. But these don’t count as capital expenditure. Governments around the world quickly cottoned on to that and, by structuring the auctions in a certain way, they created a cash cow.

“Companies don’t have to add to their spectrum every year, but the costs can be significant. Vodafone has spent €15bn in the last 5 years, while EE splashed out £5bn before being bought by BT in 2015.

“The second issue is the ever-growing competition in the mobile market.

“Mobile coverage is strong across the board, especially in heavily populated urban areas. That means there’s little to choose between the mobile networks, other than the price they charge. That’s created intense price competition, and not just in the UK. Vodafone has felt the heat in countries from Spain to India.”

So what are the possible ways out, according to Hargreaves Lansdown?  It lists some of the possible responses, but then notes the limitations to each. No real, sure-fired way out of the telco hole is discerned.

“Vodafone is hopeful of reducing leverage by selling or independently listing its tower assets. While this will help reduce debts, the group will lose the steady revenue and profit they generate.”

“BT has another monkey on its back – the final salary pension deficit. While this isn’t classified as debt, BT could be facing a multi-billion pound funding gap. As a result BT’s having to throw significant amounts of cash at the problem. A new funding package was agreed last year, which will see BT plough over £2bn into the pension scheme by 2021. Again, this soaks up cash.

“BT’s strategy leans on cost-cutting, and the group has also announced plans to expand the roll-out of fibre broadband. The government is keen for BT to help facilitate the UK’s transformation into a fibre nation, so it’s possible a favourable deal could be reached with Openreach on funding and allowed returns. Still, investors should be wary of the consequences if it doesn’t.”

So the way forward, at least according to Hargreaves Lansdown, appears to be to keep calm and carry on. Someone (or several someones) will eventually step forward with the right set of policies to steer the UK’s big cap telcos away from the cliff’s edge.

But there are alternatives to the fundamental telco problem apart from quiet optimism. On Monday we’ll look at the ‘big bang’ option - radical restructuring, hiving off everything that’s not nailed down (maybe even the network itself) and right-sizing the businesses.