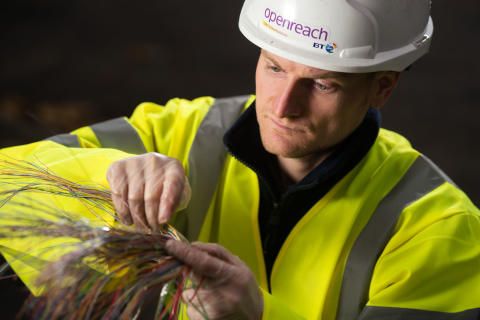 Openreach, BT’s local network division, has begun trialling new, simplified duct and pole sharing processes with five communications providers (CPs) across the UK. The trials could see new fibre broadband networks being built across the country, as they give companies the ability to carry out more work themselves, more quickly and efficiently, without seeking permission from Openreach.

It is hoped that the improved access to Openreach infrastructure will encourage more CPs to invest in connecting areas of the UK that aren’t served by existing fibre networks.

Callflow, NextGenAccess and WarwickNet are amongst the CPs taking part in the trials, which are open to every provider under the same terms, throughout the country.

The trials will test several enhancements to the current process, including:

Openreach’s ducts and poles have been available for other companies to use since 2011, and these efforts to streamline the process have been developed by an industry working group, which launched in November 2015.

Openreach is separately working to create new digital maps which will chart its UK network infrastructure and further support any CP that wishes to plan and deploy their own new fibre networks.

‘We have been using Openreach’s duct and pole access since 2011, and consider ourselves experts in this area. These trials mean we can build significant superfast and ultrafast networks quicker and cheaper, and can potentially make a massive difference to spreading fibre broadband to the most difficult to reach areas.’

"This is a great opportunity to expand our national footprint to quickly reach rural and metropolitan not spots with superfast and ultrafast fibre broadband.‎"

“We have worked successfully with Openreach for a considerable amount of time.

“Having access to their ducts and poles has allowed us to deploy our own fibre networks across poorly connected business parks on a much faster timescale, and has seen numerous businesses connected in a fraction of the time that it would have taken otherwise.”

“This is an important step which gives greater access to our network and encourages other companies to join Openreach in building better, broader and faster communications services for the whole UK.

“We have already built an open wholesale fibre network which is available to more than 25 million homes and businesses, and we’re continuing to bring fibre to more than 25,000 premises each week. We have also outlined ambitious plans to move the UK from superfast to ultrafast speeds, and we support other companies building their own networks using our underlying infrastructure.

“Our ducts and poles have been open to these companies for several years, and Ofcom has been clear that the price to access them is in line with international comparisons, but they haven’t been used on a large scale to date. We hope that these new, simpler processes – which have been designed and developed in partnership with the industry – will encourage more companies to invest, particularly in parts of the UK that aren’t already served by high-speed networks.”

Work on the trials has already begun and they are open to all CPs on an equivalent basis. This means that any company can participate under the same timescales, terms and conditions, and using the same systems and processes.

Given the scale of these trials, the programme already represents the largest third-party use of Openreach ducts and poles to date.

i Previously CPs could only insert new joints and connections within their own underground chambers.

Openreach is responsible for the last mile of the UK access network – the copper wires and fibre connecting homes and businesses to their local telephone exchanges. Openreach provides communications providers with services and products associated with that network.