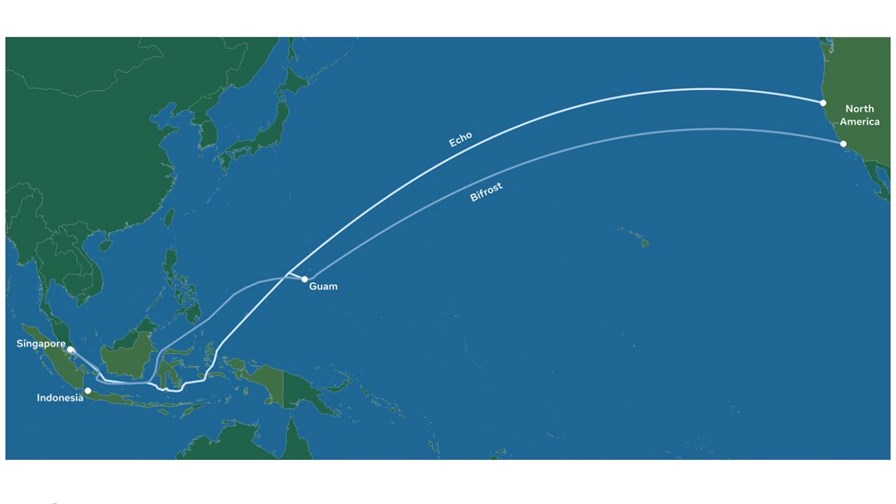 Facebook is planning to build two new subsea cable networks to connect the west coast of the US with South-East Asia, and critically neither network goes near China, a fact that should help the webscale giant get regulatory approval for the builds (see the map above). The networks, called Echo and Bifrost, will be built with support from multiple partners, including Indonesian companies Telin and XL Axiata, Singapore-based Keppel and Google. See this Facebook blog for further details.

T-Mobile US has thrown itself lock, stock and barrel into its relationship with Google with a decision to opt for multiple Google services as defaults and to promote Pixel smartphones to its 5G customers. Among the default services are “Messages by Google as the default rich messaging solution for millions of T-Mobile customers with Android smartphones” and “YouTube TV as T-Mobile’s premium TV solution.” The latter decision means the mobile operator will discontinue its own TV service efforts (TVision Live, Live + and Live Zone) from 29 April. YouTube TV boasts more than 85 channels and will be available to T-Mobile customers for “just” $54.99 per month, $10 less than the regular price. For all the details of the enhanced collaboration, see this press release.

Telia has announced a private networks service in Norway called Enterprise Mobile Network. The solution “leverages licensed spectrum over 4G and 5G to deliver secure and robust connectivity to critical applications in a range of industries like manufacturing, mining and logistics. Customers essentially get their own mobile network to provide high bandwidth, low latency and safe passage for data traffic to and from systems, for example machines or vehicles, that are part of connected business processes.” For further details, see this announcement.

UK enterprise-focused eSIM MVNO Jola has bagged a £10.25 million investment from growth investor BGF, which has taken a 25% stake in the company. See this announcement for more details.

The US Federal Trade Commission (FTC) has decided not to request the US Supreme Court to review a federal appeals court decision last year that found Qualcomm’s practices were not anticompetitive. The decision brings to an end litigation that began in January 2017 when the FTC sued Qualcomm, accusing the wireless chip giant of abusing its dominant position to extract excessive licensing fees from smartphone manufacturers.

Ethernity Networks has patented technology that improves the efficiency of SD-WAN and wireless backhaul transmissions, particularly in conditions impacted by bad weather. Ethernity’s technology fragments and bonds data transmissions on programmable hardware to produce a single data flow among wireless streams and allow operation without point-to-point connections, while at the same time improving efficiency through load balancing and other functions. Read more.