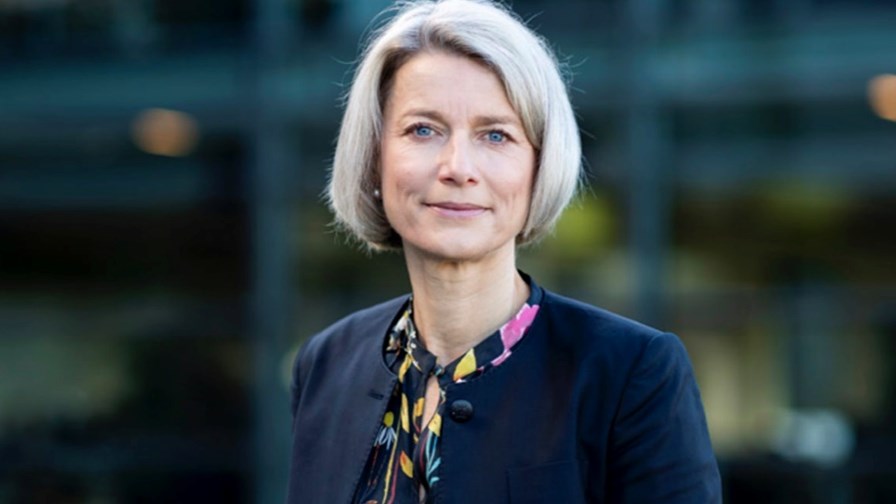 Starting 1 January 2022, Eva Berneke will be the CEO at Eutelsat.

A new face at the helm of Eutelsat, a monster stock listing for China Mobile and the ongoing growth of the global telecoms equipment market head up today’s numerous news nibbles.

Eva Berneke is to be the new CEO of Eutelsat, starting 1 January 2022. The former TDC executive joins from KMD, a Danish IT services company that is part of the NEC Group. She replaces Rodolphe Belmer, who previously announced plans to join French tech services giant Atos. Read more.

China Mobile’s upcoming listing on the Shanghai Stock Exchange is set to raise up to 56 billion yuan (US$8.79 billion) from the issue of 972.56 million shares (if the full over-allotment is taken up), the operator announced in a statement to the Hong Kong Stock Exchange. China Mobile was ejected from the New York Stock Exchange earlier this year by the US authorities, along with China’s other main operators, China Telecom and China Unicom, following the introduction of investment restrictions in the US. Once China Mobile completes its massive listing, all three will have their stock trading on the Shanghai Exchange.

The global telecoms equipment market, as defined and tracked by respected research house Dell’Oro, grew in value (on a year-by-year basis) for the sixth consecutive quarter in the three months to the end of September, up by 6% compared with the same period a year ago. Huawei is still by far the clear market leader, with a market share in the region of 28%, about the same as Ericsson and Nokia (its nearest rivals) combined. And the market is set to grow further, believe Dell’Oro’s sages, with worldwide telecoms equipment sales for next year set to top $100 billion, though the rate of annual year-on-year growth is expected to slow from about 8% in 2021 to about 2% in 2022.

Team Telecom, the informal name given to the Committee for the Assessment of Foreign Participation in the U.S. Telecommunications and Services Sector, has recommended that US regulator the FCC should award Google and Meta (FKA Facebook) licenses for the Pacific Light Cable Network (PLCN) submarine network system that will connect the US, Taiwan and the Philippines. The initial proposal for the PLCN included a connection to Hong Kong and the involvement of Hong Kong-based Pacific Light Data Communications, which gave Team Telecom cause for security concerns about the potential collection of data by the Chinese authorities. For further details, see this announcement from the US Department of Justice.

Apple is suing Ericsson in the latest episode in an ongoing patents battle, with the iPhone giant accusing the Swedish vendor of “unreasonable demands” for the use of its licensed technology. See this 9to5mac article for more.

Türk Telekom, which has more than 51 million customers, could soon have a new majority stakeholder following news that Türkiye Wealth Fund has started negotiations to acquire the 55% stake in the Turkish telco currently held by LYY, a special purpose vehicle held by a trio of banks. Those banks took on the stake in late 2018 after Oger Telekom failed to keep up with payments against a $4.5 billion loan it took out to acquire the majority holding in Türk Telekom back in 2013. Investors clearly favour the move by the Wealth Fund, as Türk Telekom’s share price gained almost 10% during Monday trading to 10.91 Turkish lira. For more, see this Reuters report.

STL, which boasts former AT&T executive Chris Rice as the head of its Access Solutions unit, is pitching what it calls Programmable FTTx (pFTTX), “a software-defined, open, and disaggregated solution that will make fibre networks highly intelligent and responsive.” The solution is being offered as a virtual solution via the VMware Telco Cloud. Read more.