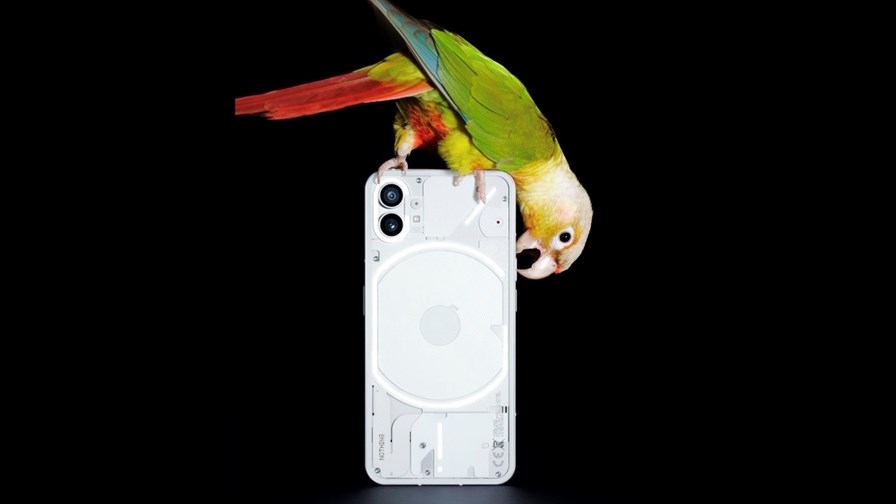 The semi-transparent smartphone (1) from wireless device startup Nothing.

London-based wireless device startup Nothing has set the scene for the launch of its first smartphone product next month by releasing images of the semi-transparent design (see picture, above) that reveals, at least from the back, the guts of the product.

The smartphone, dubbed Phone (1), will be officially unveiled on 12 July, after which it will be available in the UK via Virgin Media O2, in Germany via Deutsche Telekom, and in India via online marketplace Flipkart. The O2 and DT channel partnerships are exclusive go-to-market relationships, Nothing revealed earlier this year. Pricing details have yet to be released but the smartphone will definitely not be shipped with an accompanying parrot...

Nothing was formed in 2020 by Carl Pei, who believes there is a gap in what is already a very competitive market for “intuitive, flawlessly connected products that improve our lives without getting in the way” (which is also how the company describes its approach on its website). Pei has a track record in the sector: He was the co-founder of Chinese device vendor OnePlus, which is now part of the world’s fourth-largest smartphone manufacturer, Oppo.

Now Pei is looking to disrupt the smartphone market, and get under the skin of Apple, Samsung, Xiaomi and others for a second time with his audaciously named new company, which is already generating revenues.

And there are investors ready to support his mission. In late 2020, Nothing raised an initial $7m in seed funding from a number of “notable tech leaders” and individual investors, followed by a $15m Series A funding round from GV (formerly Google Ventures), the venture capital arm of Alphabet (Google’s parent company). It also raised $1.5m via a crowdfunding effort that attracted a lot of interest from individual investors, and then extended its Series A round by a further $50m late last year to take its total funding to more than $73m.

Then in August 2021, the company launched its first commercial product – wireless earbuds called Ear (1) that retail for £99 (US$120). Pei told the Financial Times (FT)  this week that more than 530,000 Ear (1) units have already been shipped into what is a very crowded market.

And earlier this year, Nothing raised $70m in a Series B funding round co-led by EQT Ventures and C Ventures. “This funding will be used to create new product categories in partnership with Qualcomm Technologies and its Snapdragon platform, and grow operations at its new London Design Hub, led by ex-Dyson head of design Adam Bates,” the company noted.

That Snapdragon system-on-a-chip semiconductor will be at the heart of Phone (1), which will run on the Nothing operating system (OS), which is based on Android.

The second half of this year will be telling for Nothing. The smartphone market is in something of a lull currently, due to multiple factors (including supply chain issues), and a funky new device could help to give the sector a boost, albeit in a few select markets. But Pei told the FT that the company has ambitions to take the smartphone into the US market if the initial July launch goes well.

There’s no doubt that Nothing has a buzz about it and a very creative marketing team (as well as experienced technical and design staff and influential backers). But while that combination is a strong one, it doesn’t guarantee success: Nothing will need an ace pricing strategy, and will need to generate strong, positive user reviews and not fall down on customer experience and service, if it’s to make its mark in the international smartphone sector.