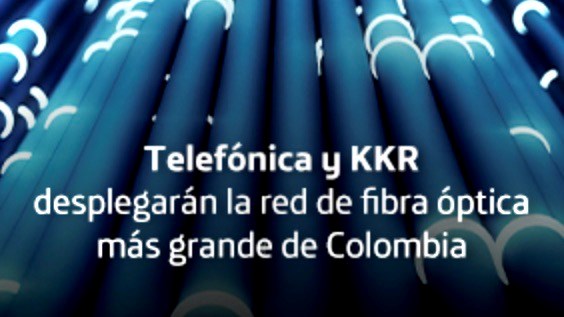 KKR is buying a majority stake in Telefónica Movistar Colombia’s existing fibre infrastructure in the Latin American country for $500 million and will turn it into an open access wholesale network using a new independent company, in which Telefónica will hold a 40% stake.

The new company carries a valuation of $500 million: Telefónica will get an initial $200 million for the 60% stake it is selling to KKR, and is eligible for a “performance-based” additional payment of up to $100 million, the partners announced.

The new open access operation will start life with a fibre access network that is already built out in 50 urban markets, passing 1.2 million properties: Telefónica Movistar Colombia says it has 380,000 customers already connected to its service, getting a symmetrical broadband service with speeds up to 500 Mbit/s.

The new open access company will invest in network expansion and aims to pass 4.3 million homes by the end of 2024, covering at least 87 municipal areas in Colombia, with more than half consisting of underserved areas outside of high-income urban areas.

The deal “will accelerate the deployment of fibre optic in Colombia at an unprecedented rate, in a market that has shown enormous potential in the last year,” stated Alfonso Gómez Palacio, CEO of Telefónica Spanish-speaking Latin America. “This is one more step by our company to lead FTTH services in Latin America.”

A previous step was taken recently in Chile, where Telefónica announced a similar move with KKR, creating an open access operation called InfraCo, valued at $1 billion.

KKR is just one of a number of private equity firms that have seen the long-term value of investing in shared digital connectivity assets, namely fibre-based broadband access networks and mobile towers: In Europe, for example, KKR holds stakes in UK fibre network operator Hyperoptic, in Open Dutch Fiber in The Netherlands, in FiberCop in Italy, in French towers business Hivory (in the process of being acquired by Cellnex) and in MásMóvil in Spain (about to get bigger from the acquisition of Euskaltel).

And it is becoming increasingly common for network operators to extract value from their infrastructure assets by selling stakes in, or floating, their access or towers units, either to pay off debt or to invest in their cloud-oriented assets: Owning everything outright is no longer the telco mentality.