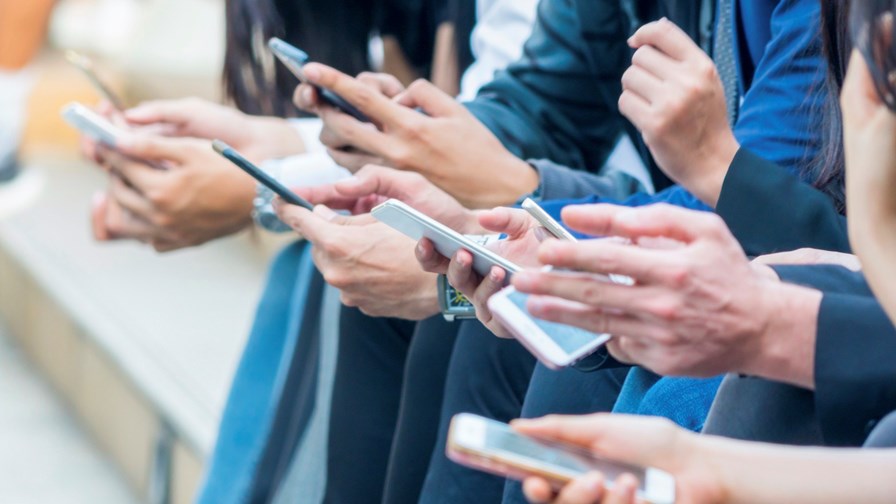 Global smartphone shipments dipped for the third consecutive quarter during the first three months of 2022 due to the impact of geopolitical, macroeconomic and pandemic-related trends, according to industry research companies.

Both IDC and Omdia highlighted recent lockdowns in parts of China as a main contributor to yet another decline in quarterly shipments. Omdia’s numbers painted a darker picture: It reported that shipments worldwide declined by 12.9 per cent year-over-year to 308 million in Q1. The company cited a slowdown in the Chinese market, and the subsequent sharp fall in shipments by domestic manufacturers, as a key factor.

“Although some decline was expected in Q1, due to the ongoing supply and logistical challenges and a difficult year-over-year comparison, things seemed to have taken a turn for the worse,” highlighted Nabila Popal, research director at IDC.

The company noted “heavy concerns” around inflation and economic instability across all regions but mostly in China, which have led to a “dampened consumer spending.”

“This is now coupled with the rising costs of components and transportation and the recent lockdowns in Shanghai, which are exacerbating an already difficult situation. On top of all this is the Russian invasion of Ukraine, which immediately impacted that region and continues on an unknown trajectory. Given all these uncertainties, most OEMs are adopting a more conservative growth strategy for 2022,” Popal added.

In fact, the tension from the Russia-Ukraine war has driven the Central and Eastern Europe (CEE) region down, falling nearly 20% year-over-year, as the outlook for the majority of the markets in the area remains uncertain. While significant, IDC estimated shipments in the region account for only 6-7 per cent of the global count in terms of volumes and approximately 5 per cent in terms of revenue.

However, IDC also pointed to China and other parts of APAC as bringing about “the biggest draw down” on global volumes, as the markets represent nearly half of all global shipments. In the period, these regions plunged 12.3 per cent in total.

“Almost everything that’s happened in recent months has been a headwind on the smartphone market and realistically many other technology segments. Our research tells us Samsung and Apple have navigated the supply chain situation a bit better than their competitors, and as a result we have seen reduced orders from the next set of top OEMs,” commented Ryan Reith, group vice president with IDC’s Worldwide Mobile Device Trackers.

He expressed optimism though, that market demand will recover and “it’s just a matter of when” it resumes.

In terms of vendors, Samsung kept its crown atop the shipments chart, with a market share of 23-to-24 per cent, as estimated by IDC and Omdia. The latter suggested that the South Korean company recorded a smaller decrease in shipments compared to its Chinese competitors as its reliance on China was “very low” for production and sales, especially since it closed down the manufacturing facilities it had in the market.

Apple was the only smartphone vendor to record year-on-year market share growth, claiming an 18 per cent share of global shipments compared with 16 per cent a year earlier, according to IDC.

“Apple’s dominance in the premium market is becoming more and more consolidating,” Omdia highlighted, adding that sales of the latest handset series by the vendor, the iPhone 13, have increased compared to its predecessor.

You can find out a breakdown of shipments, as estimated by IDC, below: 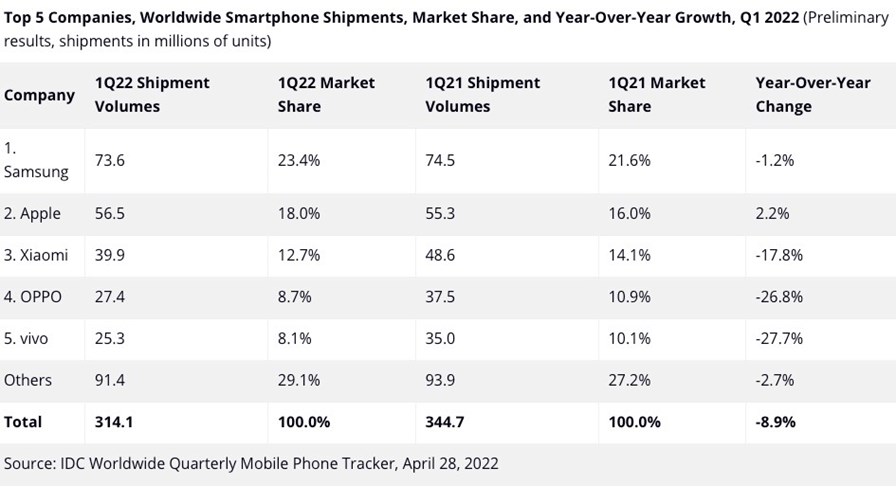 In the US, Counterpoint Research estimated a drop in smartphone shipments of 6 per cent year-over-over in Q1. The decline was attributed to a slowdown following the holidays at the end of 2021 and continued supply chain constraints affecting 5G and 4G/LTE devices.

Jeff Fieldhack, research director at Counterpoint Research, noted that the decline can’t be taken as a sign of the market contracting “because last year’s Q1 was unusually high due to several factors driving demand. Apple’s iPhone 12 series sales pushed into Q1 2021 due to its staggered launch causing higher premium demand in a usually soft quarter. $1,500 stimulus checks were also given out, which helped boost the economy that was suffering from COVID-19 impacts. LTE sales saw an uptick due to tax-season discounts and pent-up demand in Q1 2021,” he added.

The company has also noted increases in volumes shipped by Motorola, Google, TCL and OnePlus due to LG’s exit from the market.