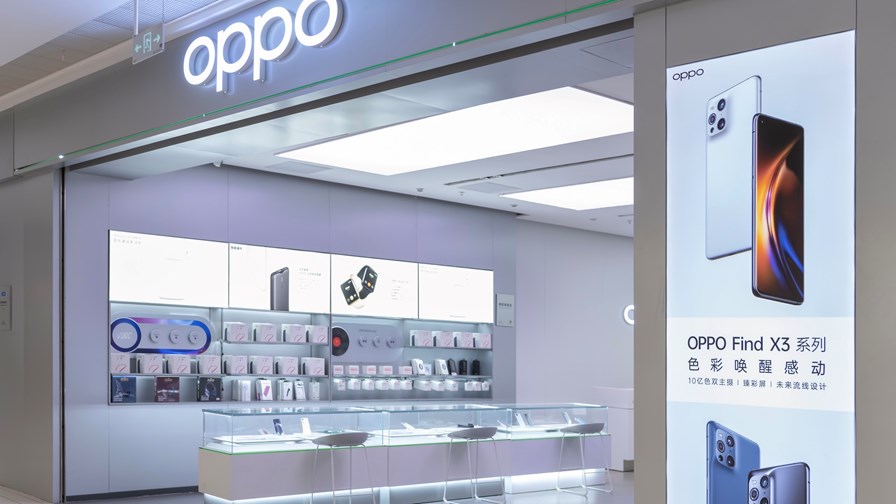 Is an economic downturn, when consumer budgets are getting squeezed, a good time to target sales and market share growth in the smartphone market? Chinese device manufacturer OPPO, the fourth largest smartphone supplier  in 2021 in terms of global shipments, thinks so, as it’s looking to ramp up its presence and sales in Western Europe starting next week.

On 31 August, OPPO is planning an in-person product launch event in Paris, where it will launch its Reno8 series of smartphones and introduce its Pad Air tablet device to Western Europe, after which consumers in the region can expect to hear a lot more about the company.

Not that it’s been hiding: Since entering the Western Europe market in 2018, the company has lavished marketing euros on sponsoring major sporting events such as Wimbledon tennis tournament (it was the official smartphone partner this year) and is a sponsor of the UEFA Champions League football/soccer tournament.

Since then it has been building sales in Western Europe and struck a number of key relationships with major mobile operator groups such as Deutsche Telekom, Orange, Telefónica and Vodafone, relationships that are vital to any vendor looking to generate significant sales.

The company hit a bit of a blip earlier this year, losing fourth spot in the European market to another Chinese device market challenger (and corporate cousin) RealMe, according to research house Canalys (see chart below), and then suffered a setback in Germany earlier this month when it had to withdraw sales of OPPO and OnePlus devices following a court ruling over a patent dispute with Nokia. (OnePlus has been a subsidiary of OPPO since June 2021.) 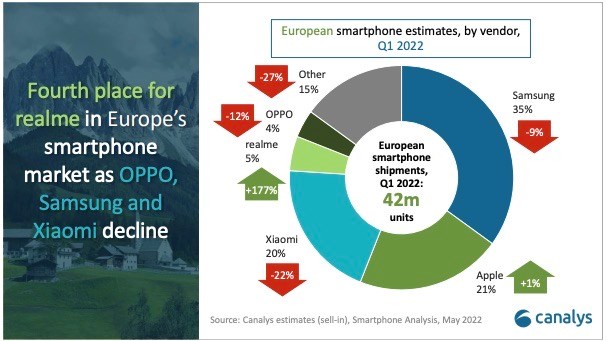 Not only that, but macro economics and supply chain issues are having an impact on the smartphone sector, which is expected to shrink this year in terms of the total number of devices shipped.

But that isn’t holding OPPO back. “As we continue to make steady progress, we will continue to expand our operation and business in Europe,” noted Billy Zhang,a vice president at OPPO. “Europe is one of the most important markets for us [outside China]. So starting from this year, we are going to… invest more effort in the premium segment” and launch a number of IoT wearable and tablet products too.

Clearly, OPPO is optimistic that Europe is ripe for further growth, and to increase its chances of success the company plans to integrate its teams that cover Central and Eastern Europe with its Western Europe units “to improve our internal operation efficiency and to maximise resource utilisation. Under this unified market strategy, we will be able to bring a more unified product portfolio for end users and develop a closer partnerships with European suppliers,” noted Zhang.

So if OPPO is to grow in a shrinking market, it clearly believes it can take market share from its rivals, which of course include market giants Samsung and Apple (but no longer Huawei, of course). So which companies does it view as vulnerable?

Zhang wasn’t keen to address that question: “We do not target specifically any competitor. We focus on doing our things right, and eventually our presence in the market will continue to grow… We never use the competition-oriented mindset. Instead, we focus on users. Actually, if you use the competition-oriented mindset, eventually you will go astray,” he opined, before adding that OPPO does study its competitors but only to better understand what they are doing.

Obviously, Zhang has the company line to toe – everything’s great, the company has fantastic products that people will want to buy, and mobile operators will want to have OPPO in their line-ups. Fair enough.

But do independent market watchers agree? Ben Wood, chief analyst at CCS Insight, has been tracking and commenting on device market developments for decades and is very familiar with OPPO. So does he think the company has what it takes to grow its sales and market share in Europe?

“OPPO has certainly shown it’s prepared to spend big bucks on promoting its brand, be that through channel support with big operator partners or more strategic above-the-line marketing with Wimbledon and UEFA. However, even with that investment, it has a mountain to climb in a market dominated by Apple and Samsung. Furthermore, Chinese rival Xiaomi has shown it is prepared to be absolutely ruthless in securing business. OPPO will need to have deep pockets to continue investing to assert itself as the ‘second’ Android player after Samsung,” stated Wood in an emailed response to questions from TelecomTV.

But at least it has decent products to pitch – the problem is, so do others, notes Wood. “I was extremely impressed by the Oppo Find X5 Pro. It’s an extremely good flagship device, with a compelling design, good camera and a decent version of Android. OPPO also has a good portfolio of ‘good, better, best’ smartphones across price points that makes it attractive to operators looking to fill their third retail slot after Apple and Samsung. The challenge OPPO faces is that rivals such as Xiaomi and Honor are also making extremely attractive devices, which adds a huge amount of competitive pressure,” noted the analyst.

And if OPPO was to have greater success in Europe, which of its rivals would feel the heat the most?  “Although Apple is a competitor, the reality is that the iPhone typically stands on its own. OPPO’s main rival is Samsung, which dominates the European market. It also faces relentless pressure from fellow Chinese phone makers Honor and Xiaomi,” the analyst pointed out.

But challenging Samsung is a very tough task, even though Huawei showed during the past decade that it was possible. “All the Chinese phone makers now aspire to be like Huawei in its heyday, but it’s highly questionable whether they have the tenacity and financial resources to reach the heady heights of giving Samsung a run for its money,” concluded Wood.