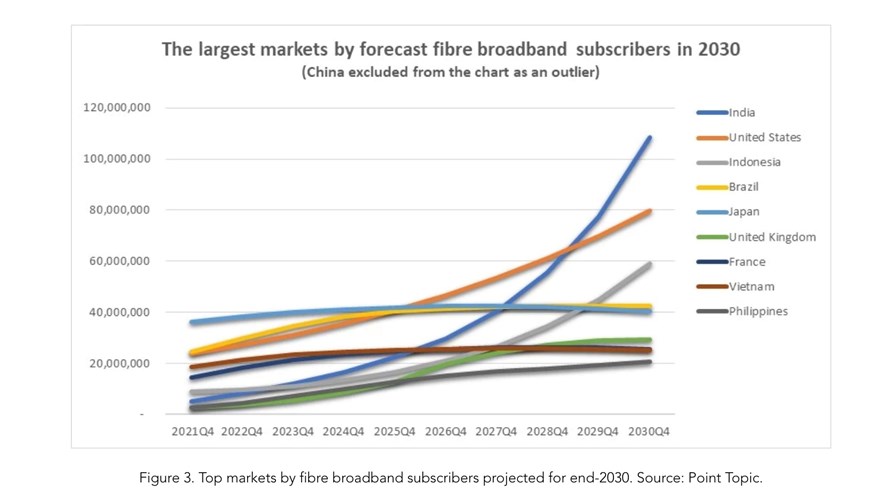 India is set to become the second-largest fibre broadband market in the world by the end of the decade, if a forecast by the research team at broadband industry specialist Point Topic is accurate.

According to the team, which is very experienced and knowledgeable, China “will remain the largest fibre broadband market in 2030”, with a projected 523 million subscribers, almost one-third of the global total, with India the second-largest market with almost 110 million active fibre broadband lines – see graphic, above, which does not include China as it is such an ‘outlier’. That would be a remarkable transformation for India, which traditionally, has very low levels of fixed-line penetration, and currently relies on mobile data connectivity for digital service access and has only a few million fibre-to-the-home/premises (FTTH/P) connections.

But India is determined to become one of the world’s leading digital societies and, spurred on by the efforts of companies such as Reliance Jio (which has been building out fixed broadband as well as its market-leading mobile broadband network) and Bharti Airtel, there is now a concerted push to hook up homes and businesses with high-speed, modern fibre lines.

India will show the most dramatic growth rate over the next eight years, though the expectations for the US market are also notable: Its fibre broadband sector is set to grow from about 22 million at the start of this year to reach almost 80 million by the end of 2030, largely at the expense of the cable broadband sector.

Indonesia is also expected to witness a dramatic rise in the number of active fibre broadband connections, from single-digit millions now to about 60 million by the end of 2030.

And there’s even some encouraging news for those who live in the UK: Due to increasing competition and investment, by the end of 2030, every household is expected to be connected with a fibre line. That, again, would be quite the turnaround story…

In all, Point Topic expects there to be 1.6 billion fixed broadband connections (of any type) globally by the end of 2030, up from 1.27 billion at the end of 2021. Of that 1.6 billion in 2030, the research firm expects about 75%, or 1.2 billion, will be accounted for by some variant of fibre broadband, whether FTTH, FTTP or fibre-to-the-building (FFTB), where a single fibre line connects to a multi-tenant building and the final line to the customer is over a different physical medium.

The Point Topic team has lots of interesting insights into the anticipated trends in the fixed broadband services market: Click here to take a look at what they have to share.