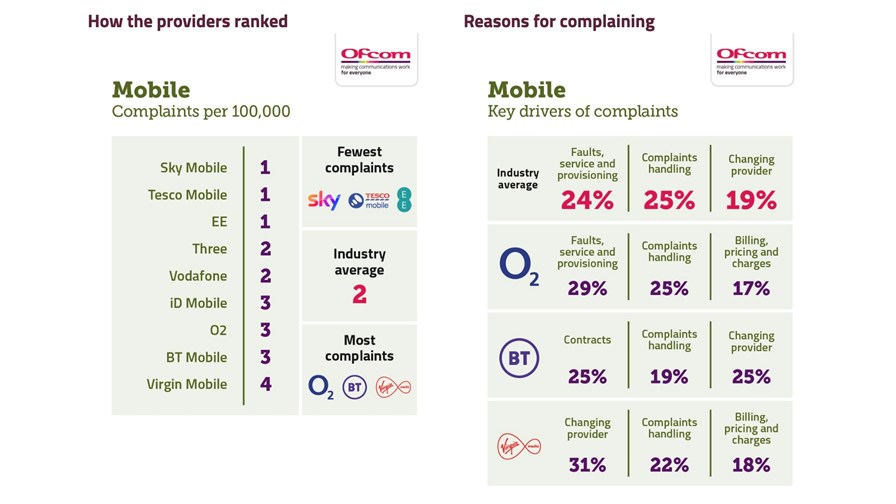 EE, BT’s mobile division, was the least complained-about mobile and fixed broadband services provider in the UK during the first quarter of 2022, generating the lowest average number of complaints for its services, the latest complaints report from UK regulator Ofcom shows.

In terms of pay-monthly mobile services EE, along with mobile virtual network operators (MVNOs) Sky Mobile and Tesco Mobile, attracted the fewest complaints – all receiving just one complaint per 100,000 users. Virgin Mobile, which despite being part of Virgin Media O2 following the merger of Virgin Media and O2 in June 2021 is still run as a separate operation, generated the most complaints for its mobile service, with four per 100,000. The main drivers for customer grievances against Virgin Mobile were the process of switching to another provider, the way in which the company handled the complaints, and its billing, pricing and charges.

BT Mobile was the second most dissatisfying mobile services provider in the UK between January and March, with grievances citing its contract terms, the process of changing providers and the way it handles complaints.

O2 also generated a lot of complaints, mostly for faults related to its services and how it handled complaints. While Three UK and Vodafone had fewer complaints for their mobile service offerings, scoring the industry average of two complaints per 100,000 customers.

Overall, complaints regarding pay-monthly mobile services between January and March were flat compared with the grievance level between October and December 2021. Then, BT Mobile didn’t score as poorly as in Q1 2022 and the most dissatisfying mobile service providers were Three UK, Vodafone and Virgin Mobile.

According to the report’s findings, complaints against fixed broadband have increased slightly in the period due to faults, issues related to the service and provisioning, and the poor way in which complaints are handled. In this service category, EE again was the provider with fewest complaints (three per 100,000 customers), followed by Sky with four per 100,000, BT with seven per 100,000, and NOW Broadband with eight per 100,000. At the other end of the spectrum were Shell Energy with 22 complaints per 100,000 users (a shocking statistic), Virgin Media with 18, TalkTalk with 14 and Vodafone with 13.

Commenting on these figures, Ofcom’s consumer protection director, Fergal Farragher, cautioned that the gap between “the best and worst providers” in the broadband sector is widening. “The figures highlight how some firms have plenty of work to do to keep their customers happy and catch up with their rivals”, he noted, and encouraged people to move elsewhere if they are unhappy with the services they get.

Customer care continues to be a much talked about part of communication service providers’ business in all markets, with all companies vociferously claiming it is a priority and a focus for investment. The reality for many users, however, is that many contracts are still very confusing, customer care channels are frustrating and sometimes hard to navigate, and customers generally feel undervalued. EE was quick to issue a statement following the publication of Ofcom’s report to say how great it is and how it provides the “best personal and local service” to its customers, but the fact is that all service providers have a very long way to go before they can claim that customer care is a real differentiator, though in the UK, it seems EE has a little less work to do than its rivals.