The smartphone market in Mainland China declined 8% sequentially, and 15% annually, to reach 83 million units.Huawei, while still the leader, saw its volume decline in China for the first time, shipping only 34.2 million units in Q3 2020. Its market share declined to 41.2%, from 44.3% last quarter, and 42.5% in Q3 2019. Vivo and Oppo maintained second and third place, but also declined 13% and 18% annually. Xiaomi, in fourth place, as the only vendor achieved increase, managed a 19% year-on-year growth to ship 10.5 million units and narrowed its gap with the top three. Apple shipped 5.1 million iPhones, down 1% compared to last year, while it dropped 34% sequentially as inventory of old models cleared to leave space for the iPhone 12 in Q4.

“The market decline was expected,” said Canalys Analyst Mo Jia. “Huawei was forced to restrict its smartphone shipments following the 17 August US sanctions which caused a void in channels in Q3 that its peers were not equipped to fill. Huawei is facing its most serious challenge since taking the lead in 2016. If the position of the US administration does not change, Huawei will attempt to pivot its business strategy, to focus on building the Hongmeng OS and software eco-system, as the Chinese government is eager to nurture home-grown alternatives to global platforms.” 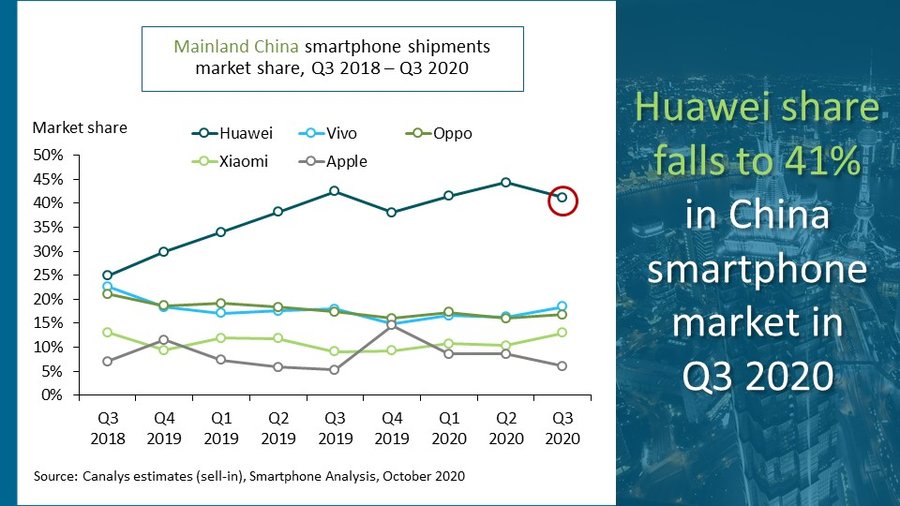 “Despite not launching a new iPhone flagship in September, Apple avoided a severe drop in Q3, propped up by more affordable iPhones, such as iPhone SE and iPhone 11,” said Canalys VP Mobility, Nicole Peng. “However, moving forwards, iPhone 12 series will be a game changer for Apple in Mainland China. As most smartphones in China are now 5G-capable, Apple is closing a critical gap, and pent-up demand for its new 5G-enabled family will be strong.”

In Q4, new product launches from major vendors will intensify competition in 5G smartphones. “This includes Huawei’s Mate40 series, which is launching in China today” added Jia. “Huawei’s competitors will move fast in Q4 and attempt to fill the channel void left by Huawei, as well as taking over its advertising placements and retail floorspace. While moving quickly is risky amid a declining market and a global pandemic, this is a one-time opportunity for Huawei’s rivals in China, which will not last.”