Around one in four UK homes can now get faster full-fibre internet, as broadband companies have extended their networks at rapid pace during the pandemic – new Ofcom figures reveal.

With millions of people continuing to rely on their broadband to work, learn and stream their favourite shows from home this year, new Ofcom figures show that just under seven million (24%) of all UK homes can take-up full-fibre internet packages - up from 21% at the start of the year. These services are faster and more reliable than internet carried over the decades-old copper network, which many UK households still use.

Nearly 12 million (40%) of UK homes can now get gigabit-capable broadband (able to deliver download speeds of up to 1 Gbit/s), which has increased from 37% in January. This includes full fibre and the fastest cable internet packages.

The vast majority of UK homes (96%) can get superfast broadband (download speeds of at least 30 Mbit/s), while almost all UK homes have access to a ‘decent’ connection (10 Mbit/s download and 1 Mbit/s upload) – enough to browse the internet, stream TV shows or make video calls.

However, around 134,000 UK properties are still unable to get a decent connection. These properties could be eligible for an upgrade under the broadband universal service. 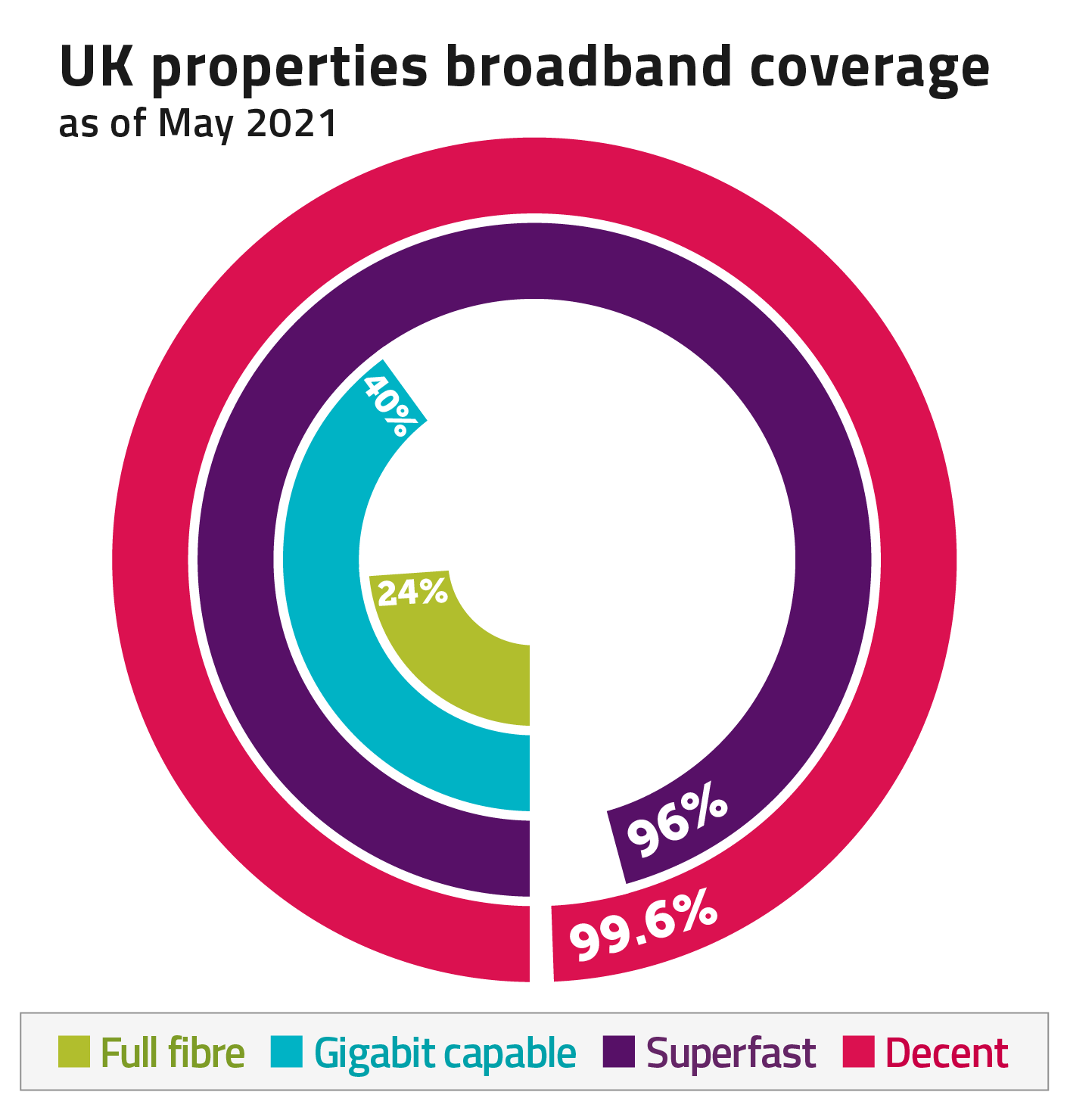 The need for faster speeds during the coronavirus pandemic has driven many UK households to upgrade their package.

We have measured the speeds and performance of broadband services at over 2,500 households. Eighty-five per cent of those have taken-up superfast packages, up from 75% in November 2019 – before the pandemic led to mass home working and learning. This means we estimate over two million households have been upgraded to packages with advertised speeds of at least superfast level (30 Mbit/s and above).

Take-up of these faster packages is reflected in the higher average speeds households are getting. The median average broadband speed recorded in our research was 50.4 Mbit/s – up 20% on the average speed in November 2019 (42.1 Mbit/s).

Keeping connected on the move

We have also researched how mobile coverage and performance compares across the UK. Our latest figures show that mobile coverage remains largely unchanged since January, with 4G available to 92% of the UK’s landmass from at least one operator.

Work is underway to improve coverage across the UK – particularly in rural areas – through the Shared Rural Network, which was agreed between the mobile industry and UK Government in 2020.

The pandemic has led to a continued shift in how people use their mobiles, Ofcom’s Mobile Matters research reveals. People using Android handsets spent nearly three quarters (73%) of their time online connected to Wi-Fi, rather than their mobile network – reflecting more time spent at home.

More areas of the UK are getting connected to 5G. In 2020, two thirds of all 5G connections recorded in our research were in London; but that has now fallen to 45%, with mobile operators rolling out coverage to wider areas.

Yih-Choung Teh, Group Director Strategy and Research at Ofcom: “Over two million households have upgraded their internet package since the pandemic began, and broadband firms are rushing to meet the UK’s need for speed.

“With full-fibre networks being built at a record rate, the UK’s networks are being made fit for the future. But our figures show work is still needed to get decent broadband to remote parts of the UK.”