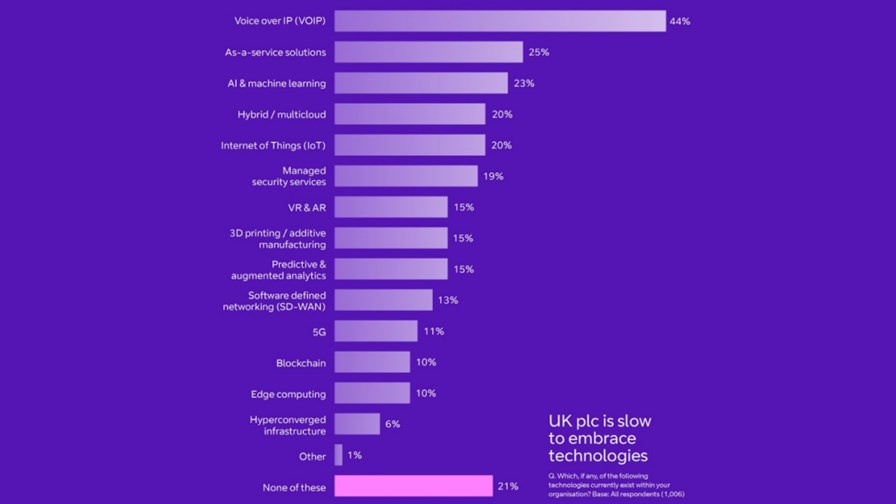 BT is throwing the book at UK business leaders and threatening to tell their parents what a sorry bunch they are: they’ve not been listening and taking notes in class and are demonstrating “digital immaturity” in their refusal  to spend billions on leading edge technologies.

In fact it’s so bad that BT Comprehensive is issuing an excoriating collective report card   “The Future In 2020 Review” in which it points out that practically  the entire class is falling behind and dragging UK PLC down in the global rankings.

The study by YouGov and BT, included data from a survey of over 1,000 businesses - ranging from SMEs to large enterprises - and revealed that so-called digital immaturity was rampant in some UK businesses. It found that this was driven by a lack of awareness of key emerging technologies amongst business leaders and a failure to link technology benefits with improved business performance.

It says 50% of UK business leaders are not familiar with half of the technologies it listed in a test. And where businesses have adopted things like 5G, blockchain and virtual reality (VR) about 40 % of them think they are yet to maximise the benefits.

As a result BT is to launch a new online Digital Health Checker to help businesses use emerging tech more effectively.

Given this alleged collective failure in understanding, it’s hardly surprising that one third of the companies surveyed claim they have no plans to invest in new emerging technology over the next five years.

Who’s not been paying attention?

BT says that “of the 14 new technologies highlighted in the survey, more than 50% of business leaders – including Chief Information Officers (CIOs) – were only familiar with half of them. Meanwhile, 40 per cent of those business leaders who have adopted new technologies worry that these have not been implemented successfully. This reveals a tech awareness problem amongst senior business and IT decision makers, which, when coupled with a digital skills gap, risks holding back the productivity and growth of UK plc.

It all appears to be a bit grim.

According to the report while more than 40 per cent of businesses have adopted VoIP (which, lets face it, can no longer be counted as a newly minted tech) no other emerging technology has an uptake of more than 25%. Currently only 20% of businesses have embraced IoT, and roughly 30% of businesses believe that 5G will play a role in their future roadmap despite forecasts that 5G will add $8trn to global GDP by 2030. When asked about technology investment plans for the next five years, nearly a third said they have no plans to invest in data driven technologies such as AI and Machine Learning.

BT laments the fact that businesses in the medical, health and education sectors are revealed as those where the biggest gaps lie, with these industries not currently using any of the technologies listed in the study, while over a third of have no plans to adopt them in the next five years.

Unsurprisingly, IT and Telecoms tops the list for the broadest investment in innovative technologies, although this is still relatively low at 26%, BT admits.

That last finding should surely have given the BT staffroom pause for thought. If the very companies responsible for developing and championing the use of new technologies are wary of investing too heavily in them, it’s a bit rich to be a leveling charges of ‘immaturity’ at the rest of the class.

Given the long history of big IT project failure in the UK, culminating recently in the scandal  surrounding  the UK’s “world-beating” digital ‘track and trace’ service (which wasn’t and didn’t) the surprise is that UK businesses haven’t been put off IT investment entirely.

And another thing, while we’re blasting back, if the UK’s top management have a tech awareness problem it may have something to do with the skills of the tech messengers - BT and others - who so often choke their messaging with jargon (which can’t be followed) and hype (which can’t be believed).