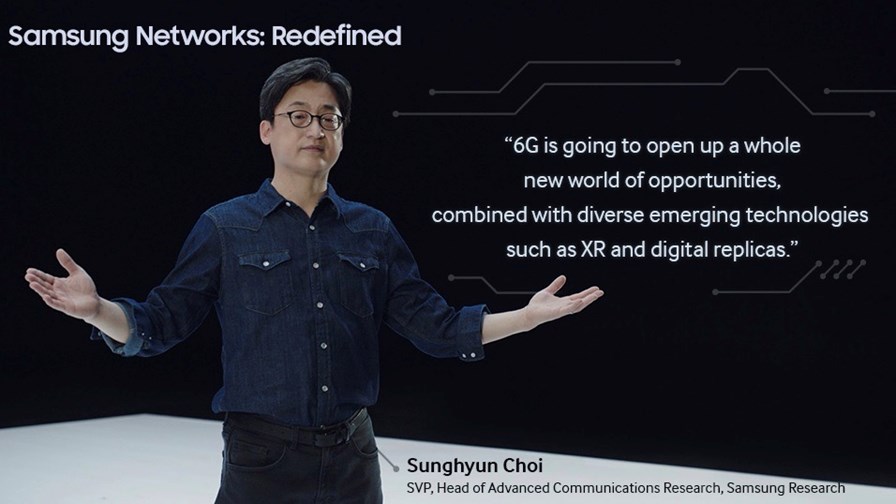 Various flavours of alternative reality, holograms and digital replicas are just a tantalising taste of what 6G has in store, according to Samsung.

The Korean electronics giant has been hosting its Samsung Networks: Redefined event this week, using it as a platform to unveil new hardware – including chipsets and radios – as well as sharing the developments in its virtualised networking portfolio.

When it comes to 6G, everything gets a little less tangible of course, which is understandable given no one really knows what 6G is yet.

Worry not though, because Samsung is on the case.

"We began our 5G research back in 2009, and now we are at it again with 6G," said Sunghyun Choi (pictured above), SVP, head of advanced communications research, Samsung, in a video presentation this week. "6G is going to open up a whole new world of opportunities. Combined with diverse, emergent technologies, it will completely shift the paradigm of immersive experiences and services."

XR – an umbrella term covering mixed, virtual and augmented reality – will benefit from 6G, he said. In addition, he suggested that 6G, combined with wearable displays and high-resolution rendering, will enable people to take interactive holograms with them, wherever they go.

"Digital replicas, which leverage the advanced sensor ai and communications technologies will take us to a virtual world where we can surpass physical limitations like never before," Choi said.

Last week, Samsung showed off a prototype mobile communications system that uses the Terahertz band. Using advanced beamforming, and whopping 140 GHz channel, Samsung was able to transmit data at a rate of 6.2 Gbps over a distance of 15 metres.

"We'll carry out our vision to bring the hyperconnected experience to every corner of our lives in the following decade," Choi said this week.

South Korea's government doesn't want to wait that long. According to a recent report by the Aju Business Daily, it aims to have the first commercial 6G network up and running in the country by 2028. To help speed up development, it has earmarked KRW200 billion ($193 million) over five years to help fund 6G research.

Much like the early days of 5G, every country is keen to lay claim to some kind of 6G leadership. As early as 2019, China claimed to have fired the starting gun on 6G research. In the US in March, the Next G Alliance established its 6G working group.

This week it was India's turn to get in on the act. On Wednesday, the Telecommunications Standards Development Society of India (TSDSI) submitted its 6G Vision paper to the ITU. It makes four recommendations, but primarily, 6G should promote interoperability of various access network technologies to enable a ubiquitous, intelligent connected compute environment, it said.

6G all sounds very exciting, all the industry needs to do now is actually invent it.