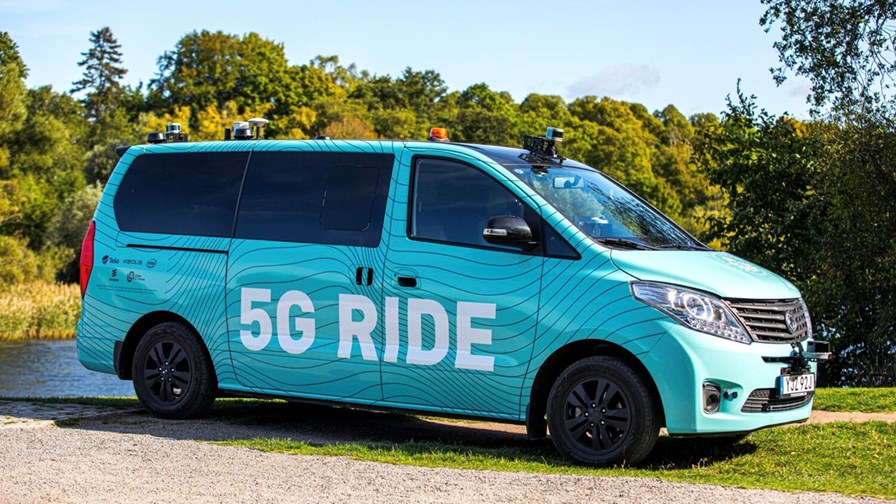 5G-enabled driverless vehicles and cloud gaming are giving us the news sweats today.

Ericsson and Telia have helped to launch a two-week trial of a driverless minibus, the 5G Ride, on the Swedish island of Djurgården, which is “home to many of Stockholm’s best-known attractions and sites.” The network to which the vehicle is connected comprises Ericsson RAN gear and “control tower” systems, while Telia’s 5G service in the 700 MHz band is providing the connectivity. “Members of the public are allowed to ride in the minibus in accordance with strict COVID-19-related regulations, including social distancing measures,” notes Ericsson. The trial pilot is the result of a partnership between Urban ICT Arena, Keolis, Telia, Ericsson and Intel, “focusing on how 5G and related control towers can enable more sustainable and efficient public transport systems.” For more details, see this announcement.

Still with Ericsson, it has been working with A1 Hrvatska on the use of MIMO technology in the Croatian operator’s backhaul transport network. “MIMO technology is becoming increasingly important in microwave networks as service providers accelerate their 5G deployments,” noted Hans Mähler, Head of Microwave Systems at Ericsson. For more on this, see this press release.

Amazon has unveiled its cloud gaming service, Luna, in the US, almost a year after Google launched its Stadia service. “Players can enjoy Luna games on their favorite devices without lengthy downloads or updates, expensive hardware or complicated configuration… At launch, Luna will be available on Fire TV, PC, and Mac as well as on web apps for iPhone and iPad, with Android coming soon. Customers in the US can “request an invitation for early access and help shape the future of gaming on Luna.” Initially, a subscription to the Luna+ games channel will cost $5.99 per month. The move is good news for telcos, which see cloud gaming as a driver for consumer 5G service uptake. For more details, see this press release.

DISH has added Ciena’s Blue Planet unit to its roster of tech partners as it builds out its greenfield 5G network. Blue Planet will provide inventory and service order management software that will help automate DISH’s operations. "With Blue Planet's open, agile and programmable approach, DISH can rapidly deploy services and allocate resources to wholesale and enterprise customers, allowing them to provision network slices based on SLAs," stated the operator’s chief network officer Marc Rouanne. Earlier this month, DISH announced it would use 5G core technology from Nokia. For more on the Blue Planet engagement, see this announcement.

Nominet, the not-for-profit, sole provider, members-only .uk Internet domain name registry for Great Britain has suddenly come over all "1984" and Big Brother. Rather than fostering and maintaining independent democratic debate between its members, according to Domain Insight Nominet unilaterally shut-down the organisation's online discussion forum slap bang in the middle of the body's AGM. Members were emailing one another and formulating questions to be put to Nominet's board and top bods when CEO Russell Haworth told the assembled virtual multitude that that he was terminating democracy forthwith. Nominet's management and members haven't been getting along for a long time now mainly because it had a tendency to hold meetings that were open only to a favoured few.

Australia’s national operator Telstra has expanded its long-standing relationship with Microsoft to develop services and solutions that will combine Microsoft Azure cloud capabilities and Telstra’s 5G network. IoT, edge and AI feature in focus areas for the partners. To find out more, see this press release.

The VP of network and architecture at Canada’s Telus says the operator will, in the future, require its mobile access infrastructure vendors to support Open RAN, reports Light Reading, but noted that the role of systems integrator in Open RAN deployment scenarios was still a bone of contention. That Telus is requiring Open RAN support will be encouraging news for two of Telus’s 5G RAN suppliers, Nokia and Samsung, which are both on board the Open RAN wagon, but less so for the Canadian operator’s third supplier Ericsson, which isn’t so keen on the disaggregation of the mobile access network.

Britain's banks may be shutting down permanently at an even faster rate than the country's pubs and post offices, but fear not if you live in the ever-widening areas where ATMs have been removed and bank branches shuttered. Nine UK "communities" are taking part in a series of "Community Access to Cash Pilots" to enable residents and businesses to test different ways of getting their hands on some cash locally rather than having to travel 20 miles to an understaffed town bank on a bus that only runs at six in the morning every other Wednesday. There are going to be "banking hubs" in the local shop as well as "pop-up services" and "purchase-free cash-back" from the butcher, the baker and the candlestick maker. The pilots will run for six months before being evaluated for "potential wider rollout across the UK". Either that, or they'll disappear forever like the bank, the baker, the blacksmith, the butcher, the candlestick maker, the pub, the post office, the village shop and the people.