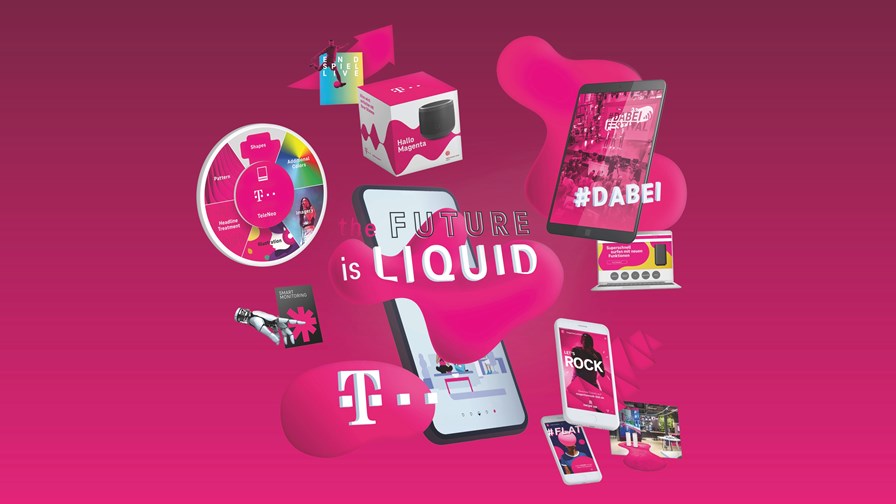 Deutsche Telekom’s liquid marketing strategy and Telefónica’s 5G rollout in Spain are at the front of today’s news queue.

Deutsche Telekom is introducing a new “liquid brand design” to address the “changes taking place in society and technology.” Alexander Engelhardt, VP of Brand Management, noted in this announcement: “Digital environments are increasingly demanding contextual flexibility rather than rigid rules. The brand must have the capability to engage with people and specific situations – and not vice versa.” We’re always happy to embrace anything that is liquid…

Telefónica has handed 5G deals to Nokia and Ericsson as it aims to reach 75% of the Spanish population with next-gen mobile services by the end of this year. Nokia notes it is also working with the Spanish national operator on its optical, IP and fiber access networks and is the only vendor providing 5G radio access network gear for all of Telefónica’s European markets (Germany and the UK as well as Spain). Telefónica launched its 5G services on 1 September, and detailed its rollout plans in this announcement.

Orange has raised €500 million from the successful launch of its first Sustainability Bond, with about 40% of the funds going towards digital and social inclusion projects and the remaining 60% going towards energy efficiency and “circular economy projects.” The move is related to key commitments made as part of the operator’s Engage 2025 strategy. See this announcement for more details.

Emerging markets have nearly always been behind developed countries in adopting the latest generation mobile networks, according to ABI Research, but that could change with 5G. It finds emerging markets look like enjoying faster than expected 5G subscriber adoption which is par, in CAGR terms, with developed markets. It’s all down to a combination of regulatory enablement, enabling technologies, such as edge computing and Open RAN, and the broader use cases that 5G enables, claims the research firm. The findings are from its 5G in Emerging Markets application analysis report.

The sale of MasMovil, Spain’s fourth largest operator with more than 10 million customers, to a consortium of US private equity funds for €3 billion looks set to go ahead after the largest shareholder opposing the deal decided to accept to offer, according to Reuters. The takeover offer of €22.50 per share was accepted by the board in June but even with the deal now set to go ahead the operator’s stock is still only trading at €22.46. The news comes as the operator launches 5G services in 15 cities under its Yoigo brand.

Telcos won brownie points through the pandemic for withstanding surges in demand: Even they seemed surprised at the resilience their networks exhibited.  But now they may be in danger of throwing it all away, according to a report from Ernst & Young titled Top 10 risks in telecommunications 2020. While they may be basking in public approval today, they are seen as key enablers for the shift to what is being called the ‘new normal’ where even more reliance will be placed on online services and fast and reliable access. E&Y warns against complacency, pointing out that “the journey to recovery will require new thinking and competencies, shifting the customer promise from speed to reliability.” It counts down the big risks that face the industry.

Nokia, in partnership with optical systems specialist SIAE Microelettronica, is providing its 1830 Optical Network Extender (ONE) and Network Functions Manager-Transport (NFM-T) to Italian wholesale FTTx network operator Open Fiber, which will use the Finnish vendor’s gear for the traffic aggregation portion of its network. See this announcement for more details.

Pinterest loses interest, pays interest… Pinterest, the image-sharing social-media site, is paying $89.5 million to cancel a lease on 490,000 square feet of office space it was due to take up in a flashy new high-rise in San Francisco, citing the Covid-19 crisis as the reason. Permanent remote working, "a more distributed workforce" and the insane price of real estate in the Bay Area were also factors. Had Pinterest taken up residence it would have cost the company at least $440 million over the next few years. 88 Bluxome St., in the SoMa district, is currently home to a tennis club and 24 courts that, as the pandemic rages, have been pressed into service as a shelter for some of the city's many homeless people.

A blog on the Politico website carrying the name of AT&T CEO John Stankey has urged US “legislators and policymakers to act to ensure the educational and economic success of all Americans by making broadband connectivity more accessible, affordable and sustainable… it is in society’s interest for our government to financially incentivize the investments necessary to ensure that all children can learn, and all workers can do their jobs.”