What’s up with… Dell’Oro, Huawei, SuperCell, XGS-PON in Slovenia 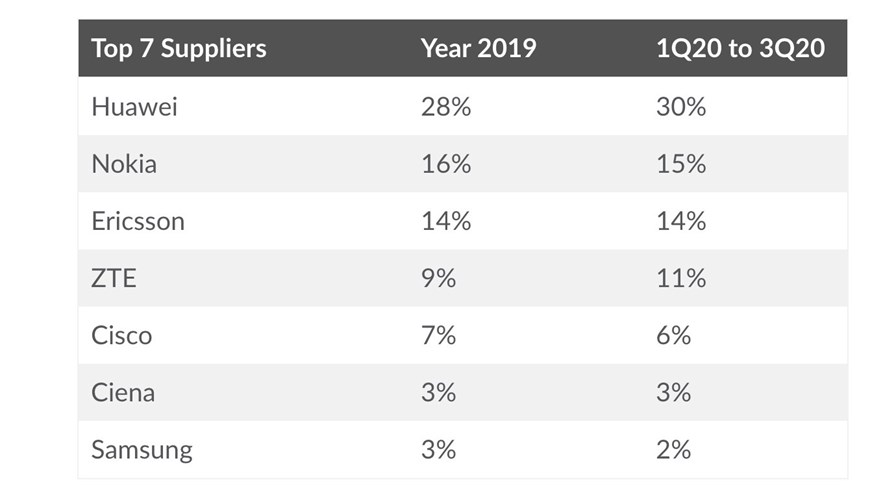 The ongoing dominance of Huawei in the telco equipment market and the latest developments in rural connectivity, both wireless and fixed, lead the way in this news roundup.

Many things change, but some things stay the same. One of those constants appears to be Huawei’s lead in the telecoms equipment sector, which, according to analyst house Dell’Oro, has strengthened during the first three quarters of 2020. As the graphic above shows, Huawei’s market share in the first nine months of this year is estimated to be 30%, better than the 28% share it garnered for the whole of 2019 and double the share of its nearest rival, Nokia. As you’d imagine, these market shares are “impacted by the state of the 5G rollouts in highly concentrated markets,” and investments in 5G networks in China, where Huawei and ZTE claim the lion’s share of the deals, have been substantial this year. See this Dell’Oro blog for more details.

The first residential user has been connected to Slovenia's RUral NEtwork (RUNE) project. Silvo Črnko, a wine maker in Jareninski Vrh, "a dispersed settlement in the municipality of Pesnica in northeastern Slovenia," is now linked to the new 10-gigabit XGS-PON network powered by Iskratel optical broadband technologies. The work to connect the small towns and villages of Pesnica began in March this year and the first of 41 planned optical connectivity nodes is now operational. Mr Črnko, whose previous access to the Internet left a lot to be desired, is very pleased. The project to extend 10-gigabit-per-second connectivity to eight surrounding municipalities will take three years to complete. Rural Slovenia is stunningly beautiful but… well, very rural. In many places there is no Internet access at all, and where it does exist it is very limited and slow. Slovenia is rolling out optical infrastructure across the nation and end users will be able to choose to sign up to one of a variety of competitive service providers. The country is a great place to visit but entering by train from Croatia is quite an experience. From Zagreb, the Croatian capital, to the Slovenian border is a 20 minute journey but, on arrival, visitors get to participate in the sort of immigration-as-theatre experience that used to be the norm when crossing the Iron Curtain in the 1970s. First the locomotive is disconnected and returns to Croatia, then dozens of blank-faced aggressive police with obligatory slavering guard dogs go through the locked carriages examining passports and luggage and escorting some hapless travellers from the train and off to who knows where before a new locomotive is eventually connected and the spectacular but very slow journey to Ljubljana begins. Taking the train out of Slovenia into Austria is as different as chalk is to cheese in that there are no border controls at all, of any sort, and the railway staff smile rather than scowl.

The global pandemic has stopped international travel in its tracks. The skies and the airports are deserted and network operators have seen a major source of easy money dry up as mobile roaming has all but ceased. It is believed that in Europe alone, operators have so far lost upwards of €2 billion in roaming fees they normally extract from non-EU travellers. That loss is resulting in earnings reductions of four or five percent given that roaming charges provide telcos with an EBITDA margin of upwards of 50 per cent. Such charges across the EU member states ended in 2017 but European network operators have continued to milk and bilk visitors from the rest of the world. They are also why alternative communications technologies such as wi-fi are increasingly popular. For the British, one of the unconsidered "benefits" of "taking back control" through Brexit will be the imminent re-imposition on them of European roaming charges. ​

UK mobile operator EE says it’s launched same day in-store repairs, as more than half of consumers say they cannot go more than a day without their phones, it claims. The new service is available to everyone, on any network and includes the option to book appointments in advance to keep waiting time down to a minimum. Full story here.

As if it didn’t have enough problems, Google has failed to keep itself up to the high ethical standards its employees once thought it espoused... so they petitioned the US National Labor Relations Board (NLRB) following their own year-long investigation into Google’s alleged violation of US labour laws when it allegedly surveilled and then fired workers who organized employee protests. According to this story in the Guardian, the case is set to be heard by an administrative law judge in the coming months.