Telcos still can’t make the 5G numbers work for them 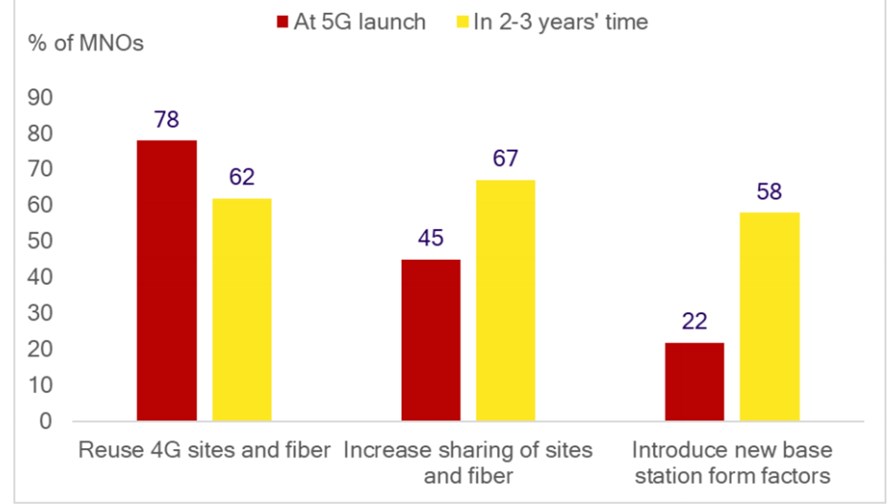 Above: the level of adoption of three tactics designed to prolong the investment in 4G even as all the marketing is moving to 5G.  From the left:

Right now ‘cost containment’ is the critical driver for telcos investing in 5G networks, reports Rethink Technology Research, which has conducted a survey into their investment plans. Because little or no immediate revenue uplift is expected from their current non stand alone New Radio investments, many telcos are desperately keen to keep a very heavy lid (with a couple of large rocks on it) on 5G upfront costs to ensure they will be  ‘far lower’ than those for 4G.

The report reminds us that the “ first wave of 5G in effect becomes 4G-plus, but with more sophisticated MIMO antennas, allowing the existing site grid to support improved coverage and cell edge QoS, and higher frequency spectrum. Other trends such as cell site densification, and greater virtualization will come later.”

In the meantime, there appears to be little prospect of squeezing oodles of extra cash out of mobile broadband users in saturated western markets, so MNOs are looking to share assets where they can to lessen any financial damage.

According to report author, Caroline Gabriel, the problem actually goes right back to when 5G plans were being laid. Instead of having a fundamental re-think, operators tended to approach 5G as its name implied - as a simple iteration on what had gone before. In fact, she points out that “when 4G ushered in real demand for large amounts of mobile data, and people started to use their mobile devices in their homes and offices instead of landlines, the outdoor-in model started to creak,” and the looming problem should have been recognised properly then.

“Inbuilding penetration has proved inadequate for high quality data traffic to reach users in large offices or homes. Yet most mobile network operators (MNOs) have struggled to find a compelling business case to deploy small cells or localized ‘sub-nets’ indoors, leaving them in a predicament as they start to explore new revenue streams for 5G - many of which are enterprise-driven, and so require excellent quality of service within buildings as well as outside them.”

As things stand it looks likely that the entire indoor data market will go to Wi-Fi 6 and fixed broadband, only some of which might be delivered by fixed wireless using 5G. That may not matter too much for large operators with fibre broadband ambitions, but it still makes the economics of 5G look shaky.

The trouble is that “standalone NR is a temporary solution, says Rethink, and will last only a year for some operators – though five or more for others – before they have to face the real challenges of a 5G migration. Those will be deploying a cloud-native 5G core and a Standalone RAN; and extending the network to the main sources of new revenue, which are likely to be people and ‘things’ that are moving between indoor and outdoor environments.”

Find out more from Rethink