On Glass Antennas the key to the real "connected car" 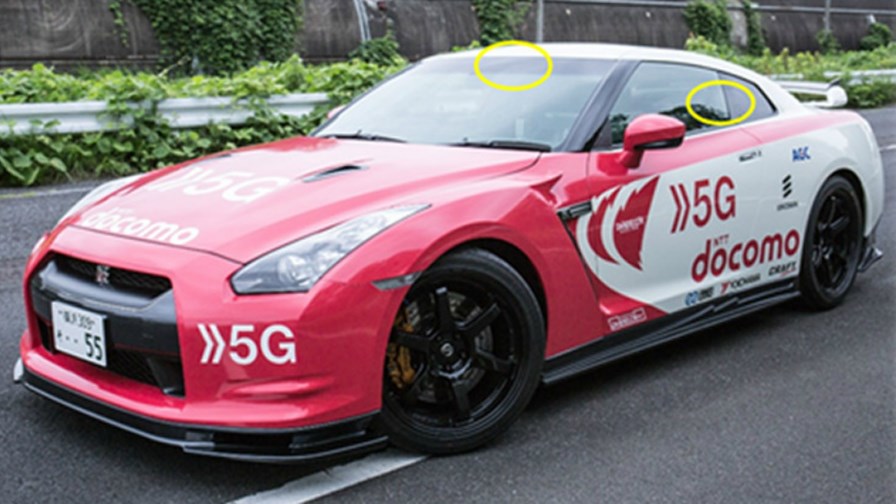 In a field trial in Japan, DoCoMo, AGC Inc and Ericsson Japan have successfully achieved a world first - 8Gbps 5G comms with a fast moving car fitted with 5G 28 GHz On Glass Antennas (OGA). RF in the 28 GHz band suffers badly from propagation loss and is unable successfully to cover long distances.

However, the installation of an OGA on a vehicle permits radio waves above 6 GHz to be both transmitted and received via "beam forming" technology that concentrates radio waves in a very specific and tightly controlled direction. A complementary "MIMO function" greatly enhances the speed of the communication process by simultaneously transmitting different data from multiple antennas thus allowing stable and high-speed communications with a moving vehicle

The trial took place at the National Institute for Land and Infrastructure Management in Ibaraki Prefecture. The test car was travelling at 100 kilometres per hour and during the trial a maximum comms speed of 8 Gbps was achieved. At the considerably lower speed of 30 km/h that maximum data speed increased to 11 Gbps. The moving test vehicle was fitted with a 5G mobile station to which eight OGA's were connected to the car's windscreen, side windows and rear window.

The antennas are small, unobtrusive, easy to deploy and do not detract from the aesthetic design of the vehicles on which they are mounted. Three 5G base were also set up along the edges of the course. The OGAs received comms signals in combination  with the MIMO function and the beam forming capability with four beams supporting both vertical and horizontal polarisation.

The trial tok place on a straight section of course some 2.2 kilometres in length.s

Original Press Release and photos below

The 5G 28 GHz band compatible On-Glass Antennas used in the field trial were designed and developed by AGC. The antennas are not easily seen from the exterior and can be installed on glass surfaces without affecting the vehicle design.

Radio waves in the 28 GHz band have a large propagation loss and have difficulty propagating over long distances. By installing an On-Glass Antenna on the vehicle, radio waves above 6 GHz can be transmitted and received using the "beam forming function", which concentrates radio waves in a specific direction, and the "MIMO function", which improves communication speed by simultaneously transmitting different data from multiple antennas. This allows stable, high-speed communications even for vehicles in operation.

For this field trial, 5G high-speed communications using both the beam forming function and the MIMO function was performed with a vehicle equipped with On-Glass Antennas. The trial was held at the National Institute for Land and Infrastructure Management in Ibaraki Prefecture, Japan. While moving at high speeds of approximately 100 km/h, a maximum communication speed of 8 Gbps was achieved, and a maximum of 11 Gbps was achieved at a speed of approximately 30 km/h, confirming that high-speed in-vehicle communications in the 28 GHz band can be achieved by utilizing On-Glass Antennas.

The trial was carried out at a straight section of test course approximately 2.2 km long at the National Institute for Land and Infrastructure Management. 5G data communications were carried out using the 28 GHz band between the moving test vehicle equipped with a 5G mobile station to which several On-Glass Antennas were connected and three 5G base stations set up along the sides of the course.

For this trial, a total of eight On-Glass Antenna elements were installed in the test vehicle on the windshield, both side windows, and rear window, so that radio waves could be received from various directions. 5. Roles of each company