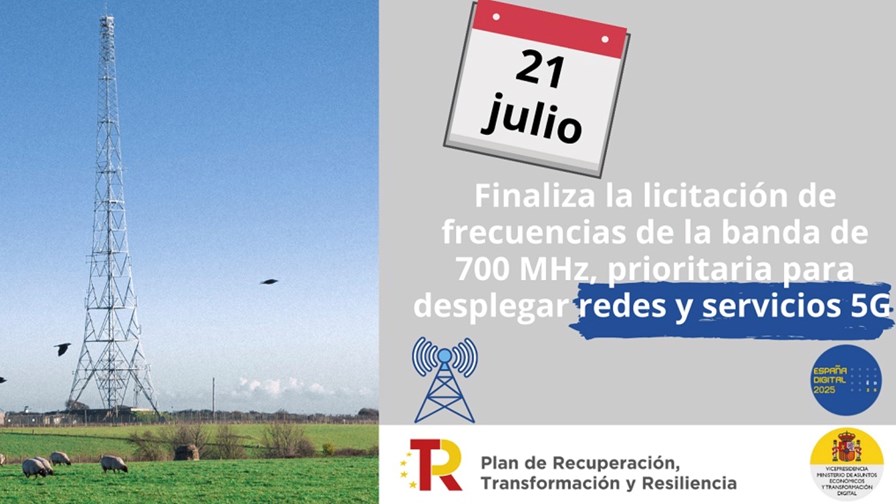 Spain’s auction of 700 MHz spectrum for 5G services was concluded in just one day, with the government raising little more than the minimum reserve prices for the blocks snapped up by Orange, Telefónica and Vodafone: The country’s fourth mobile operator, Másmóvil, did not participate.

Only Telefónica (Movistar) paid above the minimum required: It shelled out €310.089 million for its 2x10 MHz (the starting price for that tranche had been €270 million).

The spectrum licensed can be used for downlink and uplink connectivity, which is what the operators need for their 5G service offerings: The 700 MHz band enables operators to extend the reach of their next-gen mobile networks outdoors (so it is particularly useful for non-urban areas) and to better penetrate buildings with their 5G signals and so is attracting increasing operator investment, with China Mobile having just announced the results of its initial 700 MHz 5G radio access network equipment tender.

In total, then, the Spanish government raised just over €1.01 billion: In the scheme of things that’s not much for the government coffers but it also isn’t sapping the operators of funds that can be used to build out their networks. Three blocks of 5 MHz spectrum that could be used only for downlink connections were not taken up by the operators and have been classified by Spain’s Ministry of Economic Affairs and Digital Transformation as “deserted.” (See chart below.) 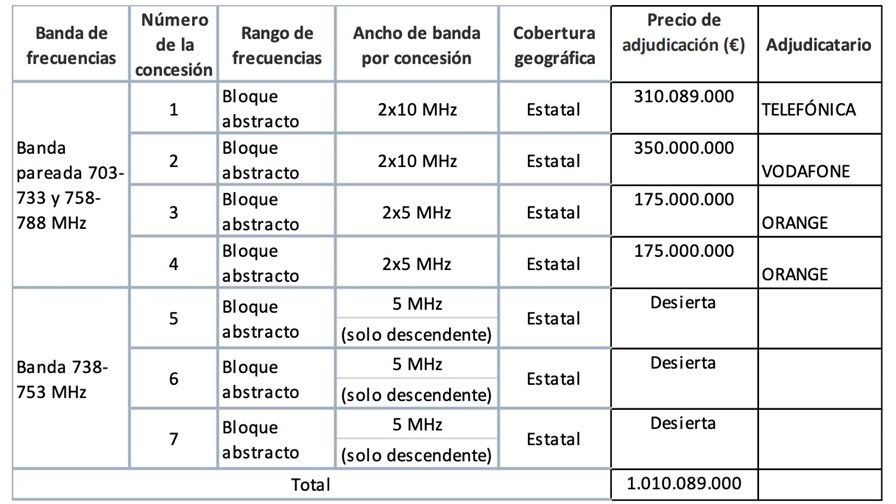 Originally, the government had set a reserve total of €1.17 billion in aggregate for the 700 MHz airwaves, but following pressure from the operators it reduced the floor level starting prices to an aggregate of €995.5 million (which included the unsold 3 x 5MHz downlink blocks) and also extended the potential duration of the licenses from 20 years to a potential 40 years at no extra cost if license obligations are met.

Orange noted in this statement (in Spanish) that its investment in the spectrum “reaffirms its firm commitment to the extension of this technology in Spain. In this way, Orange is consolidated as the operator with the largest amount of spectrum in the two priority bands for the deployment of 5G technology, given that the operator also has 110 MHz in the 3.5 GHz band (3.4-3.8 GHz). The company has invested a total of 523 million euros in the acquisition of these frequencies.”

Vodafone Spain CEO Colman Deegan noted in this statement that the operator “welcomes the improved conditions offered by the government for this spectrum auction, which represents an important step towards achieving a sustainable, economically viable sector necessary for continued investment in connectivity. The new 5G frequencies acquired today will enable Vodafone Spain to accelerate the deployment of our leading 5G network in the coming months, ensuring that consumers and businesses can take advantage of digital transformation opportunities to support economic recovery after the pandemic.”

Telefónica (Movistar) stated in this announcement (in Spanish) that the 700 MHz spectrum acquired “allows it to deploy extensive coverage, greater penetration indoors and universalize some of the characteristics of 5G communications, such as low latency.”

The Ministry of Economic Affairs and Digital Transformation noted that “this is the third auction of frequencies for 5G networks carried out in our country, after the auction of the 3.6-3.8 GHz band held in 2018 and the 20 MHz auction of that same band” in February 2021.