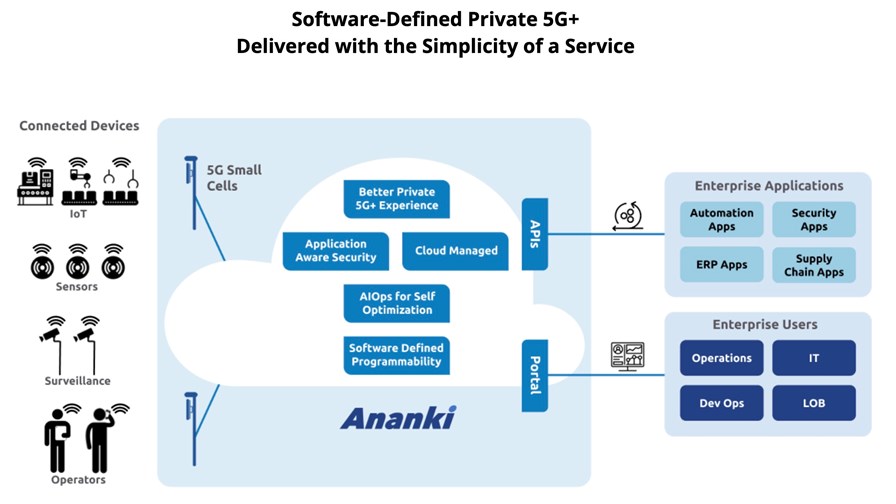 Here’s an indication of just how hot the private 5G networks sector is right now: The Open Networking Foundation (ONF) has launched an independent company, Ananki, to provide the networking and IT capabilities needed to set up and run a private 5G network in a software-as-a-service (SaaS) model, and is building the spin-out on the back of an initial engagement with an influential US government unit.

Ananki is pulling together the software stacks developed by multiple ONF projects – including Aether (connected edge cloud), SD-RAN, SD-Fabric and SD-Core – and offering them on a SaaS basis that, according to the ONF, will make “private 5G as easy to consume as wifi for enterprises.”

That’s quite a claim – but it will also be a very appealing one: Enterprises are very familiar and comfortable with Wi-Fi, but the term 5G will conjure up all manner of specific hardware and architectures that would likely appear to be out of their wheelhouse. Enabling and managing a network using an integrated set of open source software stacks running on standard servers and making use of Open RAN-ready 5G small cells will seem less daunting.

And, of course, the ONF is talking up the applicability of the Ananki solution to modern enterprise communications environments, with enhanced security, AI-enabled automation and APIs that empower developers to “build transformative IoT, IIoT and OT solutions.”

Ananki has a top drawer reference too, at least for Aether: It was selected for the $30 million Pronto Project being run by the Defense Advanced Research Projects Agency (DARPA), an R&D unit of the US Department of Defense responsible for the development of emerging technologies for use by the military. Pronto is “building and deploying a beta-production end-to-end 5G connected edge cloud leveraging a fully programmable network empowered by unprecedented visibility, verification and closed-loop control capabilities to fuel innovation while helping to secure future network infrastructure.”

According to the ONF, “DARPA encouraged ONF to commercialize the platform in order to advance the impact of the project’s secure 5G research. To date, ONF has operationalized and deployed Aether at 15 locations operating as a cloud managed service.”

Ananki shares executives with the ONF: Aseem Parikh, VP of Solutions and Partnerships at the ONF is also the Co-Founder, Head of Product Management & Customer Success at Ananki; while Timon Sloane, VP Marketing and Ecosystem, is also C-Founder and VP Marketing at Ananki. It’s unclear currently how many people are working as part of the Ananki team.

It’s also unclear what Ananki’s financial position is at present: The ONF describes it as a Public Benefit Corporation. We await further details, especially about whether Ananki will seek external equity investment from VCs or other third parties.

One thing’s pretty clear, though: Ananki is participating in a market that is expected to have significant traction amongst enterprises and generate billions of dollars in revenues in the years to come. (See Sizing the private 4G/5G opportunity is harder than it looks.)