Next year, Ofcom will auction 190 MHz of spectrum in the 2.3 GHz and 3.4 GHz bands – an increase of just under a third of the total mobile spectrum currently available. This represents more than three-quarters of the 4G airwaves that were released in 2013.(1)

People and business increasingly depend on reliable, high-speed mobile broadband. More than seven in ten adults currently have a smartphone, and the amount of data carried over UK mobile networks is rising exponentially.

Acquiring extra spectrum is one of the ways operators can increase their network capacity, and the frequencies being sold will help meet consumer demand for mobile broadband services.

The 40 MHz of spectrumto be sold inthe 2.3 GHz band is already supported by mobile devices, such as the iPhone. These airwaves could be used immediately after release to provide extra capacity, meaning faster downloads and internet browsing for consumers.

The 150 MHz of spectrumto be soldinthe 3.4 GHz band is not currently used by most mobile devices, but is likely to be usable by future devices in coming years. The 3.4GHz band has also been identified as central to the rollout of 5G across Europe.(2)

We propose to apply a cap, of 255 MHz, on “immediately useable” spectrum that any one operator can buy. As a consequence of this proposed cap, BT/EE would not be able to bid for spectrum in the 2.3 GHz band.(3)

Ofcom is concerned that, if these immediately usable holdings were to become more unbalanced, this could harm competition in the next few years.

We are not proposing a cap on the amount of 3.4 GHz spectrum. This is because the band is not immediately useable, and we believe it is important that operators are given an opportunity to acquire this spectrum so they are able to consider early development of 5G services.

Operators hold varying amounts of spectrum. But the UK mobile market remains among the most competitive in Europe and has been serving consumers well. For example, UK mobile users report much higher satisfaction with the cost of their service than people in other major countries.(4)

Unlike the 4G auction in 2013, we are not proposing coverage obligations on the winning bidders in this auction. This is because the frequencies being sold are best suited for delivering greater network capacity, not achieving wide geographic coverage.

Philip Marnick, Ofcom Spectrum Group Director, said: “Spectrum is the essential resource that fuels the UK’s economy. This auction can help ensure that UK consumers can access the mobile data services they need, and that operators can continue to innovate and build for the future.

“The UK has long benefitted from strong mobile competition. We are designing the auction to ensure everyone benefits from a market that continues to innovate and serve them well.”

Planning for the future

Demand for mobile data services is expected to rise considerably in the coming years. To address this, more spectrum is needed. Ofcom plans to release further spectrum for mobile use.

These airwaves include frequencies in the 700 MHz band, which is currently used by Freeview television and wireless microphones. Another potential source of future mobile spectrum is the 3.6 GHz – 3.8 GHz band. This is currently used by a mix of satellite services and ‘fixed links’, used for high-capacity data transmission.

The closing date for responses to today’s consultation on the next spectrum auction is 30 January 2017. 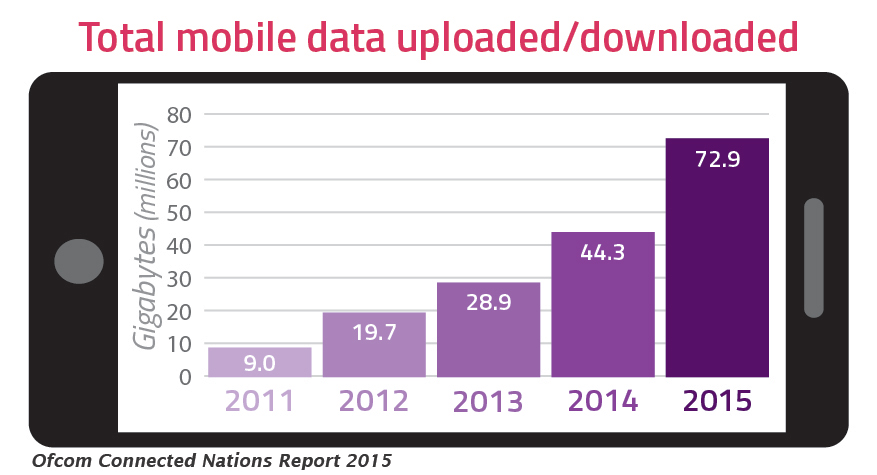