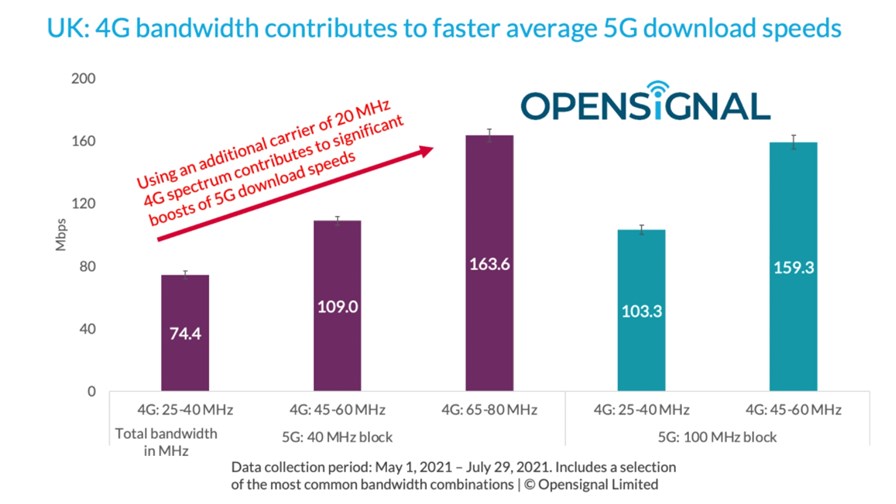 A study by Opensignal (the crowd-sourced network performance data collection specialist) has revealed what it apparently believes might be viewed as a counterintuitive result by many. To ease the transition from 4G to 5G the industry opted for an intermediate stage designed to  take advantage of 5G spectrum and provide valuable learnings, without busting the bank by demanding a full infrastructure investment (with its attendant costs) from the outset. Besides which the relevant standards hadn’t all been ratified by that stage. The result was the Non-Stand-Alone mode (NSA) for 5G, whose main characteristic was that access to 5G spectrum required anchoring by a 4G connection to a 4G core.

Opensignal has been analysing the impact of different proportions of 5G and 4G spectrum in Germany, Italy and the UK and what effect the different mixes have on the user experience, in particular download speeds.

That research showed, it says, that a 4G network anchoring 5G in non-standalone mode can download data at a faster clip by using 4G carrier aggregation and loading extra 4G spectrum into the mix rather than simply using a single 4G channel to do the anchoring. It says that in the UK, “with 25-40 MHz of supporting 4G spectrum, operators achieved average 5G download speeds of 74.4 Mbps, as seen by our users. An additional 20 MHz (45-60 MHz) — which would mean using an extra carrier, as [carriers] only go up to 20 MHz -  boosted the average 5G download speeds experienced by our users by 46.5%, to 109 Mbps. Another 20 MHz (65-80 MHz) allowed our users to see a speed increase of 50.1% (compared to 45-60 MHz), up to 163.6 Mbp.” (see chart above).

Similar results were obtained in Germany and Italy. That’s led Opensignal to conclude that 4G networks remain important in a 5G world.

Which is true, but is also something that telcos already fully understand, especially as they use Dynamic Spectrum Sharing (DSS) to carefully pick their way through the transition to 5G. DSS is a sort of real-time spectrum refarming exercise because you can’t just suddenly switch from 4G to 5G at a mast site when many of your users are still on phones which support 4G or even 3G, but not 5G.

But what the Opensignal analysis does illustrate is the differences in perspective between a research firm analysing a network from the outside looking in, rather than - as many mobile network oriented research firms are apt to do - from inside of the network looking out. The understandable assumption (given years of 5G hype) by smartphone users is that 5G has to be better, faster and shinier than 4G otherwise what’s the point? Hence the slight disconnect when it’s discovered that the ‘G’s are about much more than just progressive data speed increases.