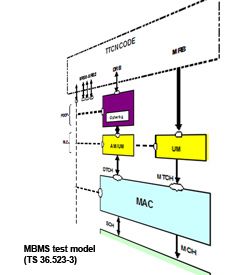 3GPP has always recognized the importance of having standardized test specifications available to manufacturers and certification bodies, in order to ensure the highest level of interoperability of mobile devices.

In the first half of 2015 a new important milestone was reached by the test experts from 3GPP Task Force 160 (TF160). In collaboration with test platform vendors (providing wireless network simulators) and device manufacturers (providing real wireless handsets), TF160 have completed the verification of Release 11 TTCN-3 protocol test cases specified for the FDD part of the eMBMS Service Continuity (eMBMS-SC) Feature.

The Evolved Multimedia Broadcast/Multicast Service for LTE (eMBMS), or “LTE Broadcast”, enables the delivery of the same content simultaneously to a very high number of users through the efficient usage of radio resources. It is particularly suited to the delivery of live video events, public alerts and the distribution of software updates for mobile devices.

eMBMS was initially introduced in 3GPP Release 9 with improvements arriving with both Release 10 and Release 11, including the enhancement of mobility procedures to ensure the continuity of both unicast and broadcast services when the wireless device is moving around and regularly changing access points.

The conformance test cases delivered by TF160 for Release 11 eMBMS-SC, in addition to the test cases delivered for Release 9/10 eMBMS, ensure that the mobile devices correctly implement the eMBMS protocol requirements specified in the LTE standards. These tests have already been selected by the Global Certification Forum (GCF) to create and operate an eMBMS certification scheme to ascertain that eMBMS-capable mobile devices will work effectively on any LTE network in the world having deployed eMBMS services.

For the future, both 3GPP working group RAN5 and TF160 are now developing conformance test cases for the new Features added in Release 12. Two key Features are of particular interest to the industry:

About 3GPP RAN5 & the ETSI CTI

The development of test specifications is the responsibility of the Technical Specification Group (TSG) RAN Working Group 5 (RAN5) within 3GPP. RAN5, however, uses the services of the Centre for Testing and Interoperability (CTI) within ETSI to implement the test cases in the ETSI-standardized language TTCN-3 (Testing and Test Control Notation version 3).

The ETSI CTI manages a 3GPP-specific task force (TF160) of 20 testing experts drawn from 3GPP member companies. TF160 maintains a set of 2800 test cases, adding up to 200 new tests per year. These tests are in turn used by the Global Certification Forum (GCF), an independent certification scheme for mobile phones and wireless devices that are based on 3GPP and 3GPP2 standards, and by the PTCRB, the wireless device certification forum established by North American mobile network operators.