For 5G services, the UK and US fall short – Opensignal 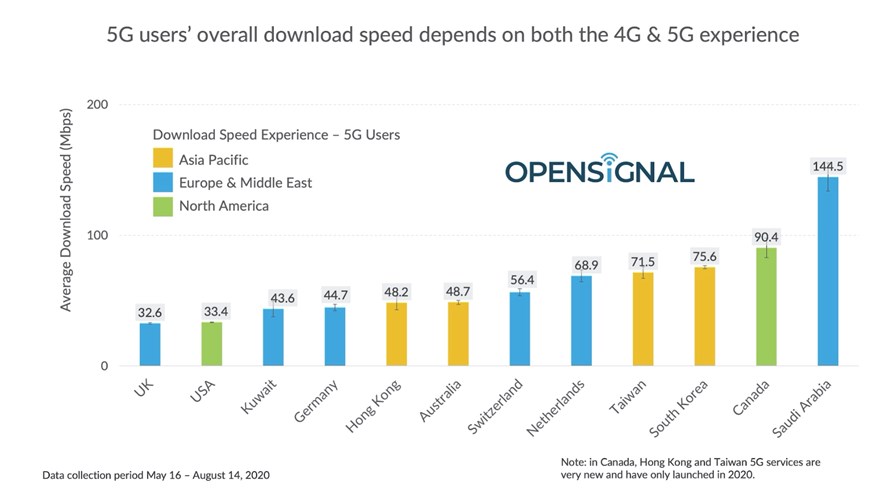 It’s early days for 5G, which the mobile industry as a whole has talked up to be the best thing since sliced bread (as well as a catalyst for industrial growth).

While, in reality, 5G can only deliver so much in its early days, the very least a 5G contract user can expect is ultra-fast mobile broadband, right? That’s not too much to expect, is it? It isn't... it's the bare minimum...

And if you’re a 5G user in Saudi Arabia or Canada, you’d probably think signing up to the latest service offer was a pretty good move. For 5G users in the UK and US, not so much, according to statistics and analysis from Opensignal, which collected data between May 16 and August 14.

Opensignal does a great story of explaining its insights and, in a smart move, has assessed 5G user experience by taking into account “their average 5G and 4G download speeds as well as the time spent connected to each technology,” because, well, that’s what 5G customers are using, and will be for some time.

As the chart above shows, Opensignal gathered data in 12 markets, with Saudi Arabia coming out on top and the UK taking the wooden spoon.

But at least UK users should be noticing a significant mobile broadband boost when they are on a 5G connection compared with 4G: Opensignal found that, on average, UK 5G downstream speeds came in at 133.5 Mbit/s, more than 5 times faster than the 4G speed. But in the US, the average 5G downstream speed was just 50.9 Mbit/s, and that’s only 1.8 times better than the average 4G speed.

For more on that, and much more, check out the very impressive Opensignal blog, Benchmarking the global 5G user experience. Great work!