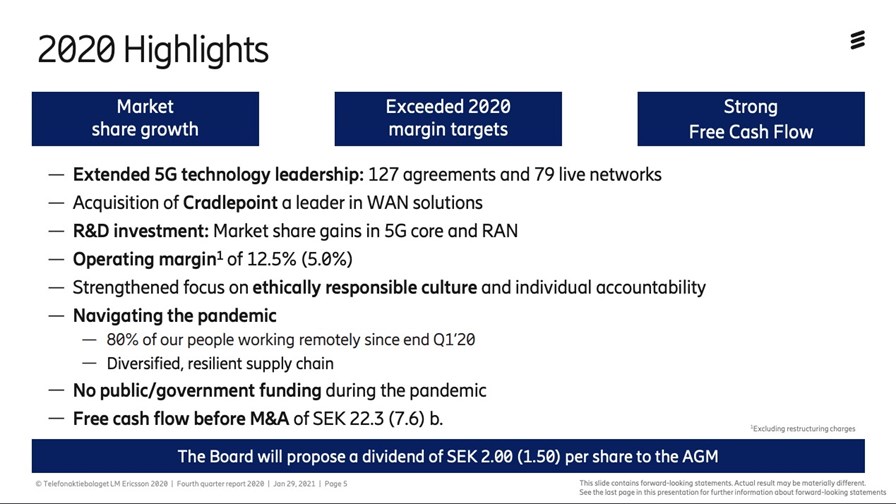 When Ericsson CEO Börje Ekholm said this morning that his company is “through the turnaround phase” and focused on profitable growth, the financials he presented for 2020 during the vendor’s earnings webcast backed up his claim.

And it wasn’t long before he was boasting that the company’s R&D investments were now helping it to grab business from its main 5G rivals.

The Swedish vendor reported fourth quarter sales of SEK 69.6 billion ($8.32 billion), up 5% compared with a year earlier – excluding exchange rate shifts and changes in the product portfolio, that increase shoots up to 13%. The fourth quarter operating margin improved to 15.8% from 9.7%, and net profit grew by 60% to SEK 7.2 billion ($861 million).

The Networks division, which accounts for the bulk of revenues (about 71% of the total), grew its sales by 11% year-on-year and increased its operating margin to 21.5% from 14.5% a year earlier (see chart below). The sales ramp was due to improving numbers in North America (Canada as well as the US), in North-East Asia (China and Japan) and in Europe. 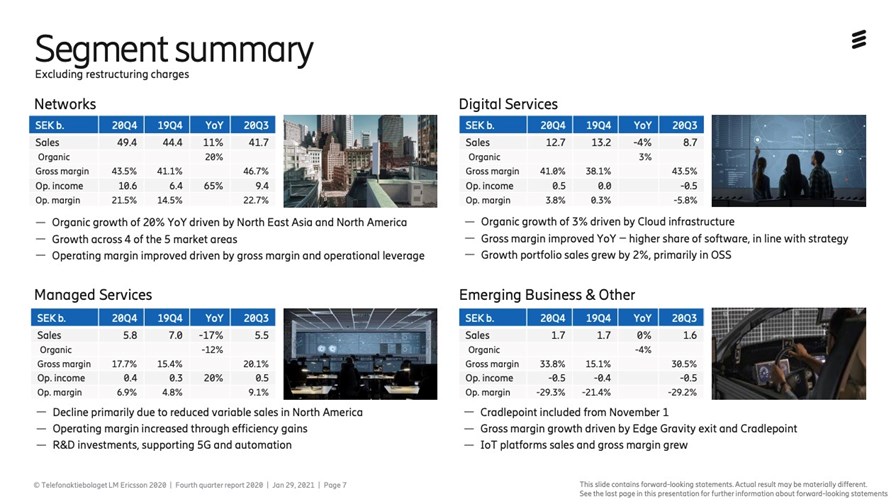 The full financial details, including a breakdown of sales by geographic region and by division can be found in this Ericsson press release.

Investors liked what they heard, as Ericsson’s share price jumped by 7.6% to SEK 105.70 on the Stockholm exchange: Compared to a year ago (pre-pandemic), Ericsson’s stock is up by more than 30%.

And Ekholm is bullish about Ericsson’s current position in 5G, boasting 127 commercial contracts and 79 operating networks around the world and claiming “market share gains from all competitors.” Such a claim is to be expected with respect to Huawei, which is finding itself out of favour in an increasing number of markets and so is being replaced by its rivals: Ericsson’s claim sounds more concerning for Nokia, which can’t afford to cede ground to rivals right now. The Finnish vendor issues its 2020 report on 4 February.

Ekholm said Ericsson’s market share gains are in multiple regions, including in Europe, where the size of the market has not grown but where Ericsson has taken business from its competitors, though he didn’t provide any further insights.

The state of the European market appears to be at the front of the CEO’s mind: Ekholm raised concerns about the region on a number of occasions during the company’s earnings webcast presentation. “So far we have had limited 5G rollouts in Europe, and we are a bit concerned that Europe is falling behind the front runners in China, Australia, North America and the Middle East.”

Why is this a concern? “We are increasingly seeing that many countries are accelerating the investments in the 5G network, as they see innovation on top of the network can easily create value that's five to 10 times the network investments and allow them to transform and digitalize their companies to leverage this new platform. We hope that Europe will see this value as well before we fall too far behind the more aggressive countries… we're hoping we will start to see more 5G rollouts on a bigger scale in Europe during 2021 that would further underpin growth.”

Ericsson would certainly like to see this happen soon so that operators invest in traditional integrated 5G solutions that will last multiple years and embed Ericsson as a key network technology partner: If decisions are delayed further, that increases the chance that alternative options might become attractive to European operators. Nokia is, of course, Ericsson’s chief rival for 5G contracts, but Samsung is starting to make its presence felt – it just completed an interesting trial in the Czech Republic with Deutsche Telekom – while the potential threat of Open RAN-based alternatives will loom larger as the years go on: Ekholm has said previously that he expects Ericsson’s sales to be impacted by Open RAN competition within a few years. (See Ericsson CEO sees Open RAN impact from 2023.)

In the meantime, he doesn’t see Open RAN having much impact on the Ericsson world. “We’re involved in Open RAN – we are a key contributor in the [O-RAN Alliance]. But at the same time we see right now that speed to market, as well as price performance reasons, means integrated solutions will continue to be a majority of the network deployment [technology] for the coming years… The discussion of when Open RAN architecture is going to be truly competitive is a bit hard to address right now, but it's not in the near term – we don't see it ready for prime time, except for low performance applications or segments in the market,” said Ekholm.

And when it is truly competitive, as key Ericsson customers such as Deutsche Telekom, Orange, Telefónica and Vodafone expect it to be? Well Ericsson is preparing the ground now to play a role, though in a less aggressive way that Nokia or, especially, Samsung. (See Ericsson unveils Cloud RAN plans, a first small step towards disaggregation.)

The disaggregation of the radio access networks is not Ericsson’s only concern, of course: China is a growth 5G market for Ericsson right now but Ekholm and his team know that could change very quickly if the Chinese authorities decide that retaliation is in order after Huawei was banned from participating in any Swedish 5G rollouts.

Ekholm was reluctant to address questions about China in any detail, saying only that he “reads the papers like everyone else” about the potential consequences of retaliation, but Ericsson did address the situation in its earnings press release, noting:

“The Swedish telecom regulator’s decision to exclude Chinese vendors from 5G networks may create exposure for our operations in China. Our business in 180 markets today has been built on free trade and open, competitive markets. This has also ensured the development of a single global standard for mobile communication. It is critical that responses to the geopolitical situation safeguard the extraordinary value associated with those operating standards for 5G and beyond.”

Ericsson’s relationship with the Chinese operators hasn’t been damaged yet, though. “We see no significant impact and we think our customers want us in the network. China is aggressively rolling out 5G – it is important for us, maybe more for 5G technology leadership than volume,” noted the CEO.

How the situation will play out is anyone’s guess.