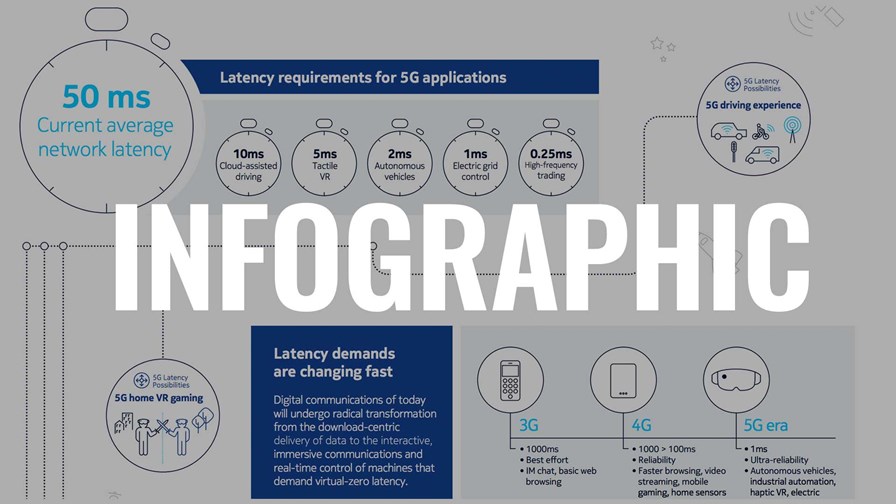 The war against mobile service latency has multiple fronts, including on the smartphone itself (or the remote device). Recently the drive to offer lower latency has concentrated on the ‘network edge’ and the techniques and business models which could be unleashed there (see Edgenomics Summit: Partnership scenarios for edge hosting-for-5G). But latency management for applications will require a whole range of control-points and techniques such as segment routing to be applied right across the network (including the fixed parts) up to and including the end-user device - especially if there still any ambition to get to ‘sub-millisecond’ transmission for some applications (as in the diagram above)

Telia and Ericsson, who have a long-standing ‘5G Alliance’ to surface and test new 5G features, have announced a new ‘inactive state’ 5G feature that offers mobile broadband users the functional equivalent of being ‘always connected’ but without the usual handset power drain, the companies claim.

The breakthrough was engineered using Ericsson’s software and 5G Standalone network nodes. Along with Qualcomm, which supplied the Snapdragon X60 Modem-RF System, the companies were able to demonstrate the successful transition between a “connected state” and an “inactive state” without the device falling back to “idle” - an industry first, it’s claimed. That feature reduces the amount of signaling required during state transitions making it possible to improve latency and make a material difference to battery power consumption.

Ericsson claims the development of the ‘inactive state’  has largely been driven by the growing field of Machine-type Communication (MTC), part of 3GPP standardization where Ericsson claims  a leading role. In most MTC scenarios, the amount of data that wireless devices typically exchange with the network is small and usually not urgent enough to justify the high battery consumption required to handle all the signaling involved in the legacy idle-to-connected transition.

For current and future 5G use cases with a large and growing number of devices, improved connection, state, and mobility handling have been identified as key elements of efficient support. The development may prove to be a significant assist  for enhanced mobile broadband as well as  for  IoT use cases where both low latency for device control (drones etc) and long battery life for remote IoT are crucial, “but it’s not a game-changer,” says 5G critic Professor William Webb.

One of the criticisms of 5G since its inception (by William Webb and many others) has been 5G marketing manifesting the apparent industry obsession with data speed to the exclusion of other and, some felt, more important mobile broadband improvements to be made in the transition from 4G to 5G. Top of that list of real needs tended to be  latency improvement for mobile broadband for the next generation of applications. Perhaps mobile handset marketeers were thinking about their future advertising copy and felt that improving latency didn’t cut the marketing mustard while the promise of gigabit (and faster) connections did.

But now, with migration to the cloud well and truly underway, a greater appreciation of lower latency as an enhancer of the ‘user experience’ has taken root, especially around advanced online gaming and the growing focus on corporate applications.

“Latency has now become a critical issue,” says Kester Mann, Director of Consumer and Connectivity at CCS Insights. “Speed and latency were always offered as the twin advantages of 5G, but now my perception is that latency has now  become more important than speed.”

And of course the industry’s attention has now turned to corporate applications primed to take advantage of network slicing with its ability to provide low latency and other network features on a selective basis.

“It’s a good practical development,” says William Webb, “but I think there is a dash of 5G-style confusion in there too. It’s not clear what or who this is aimed at. Is it aimed at machines or mobile game users?”