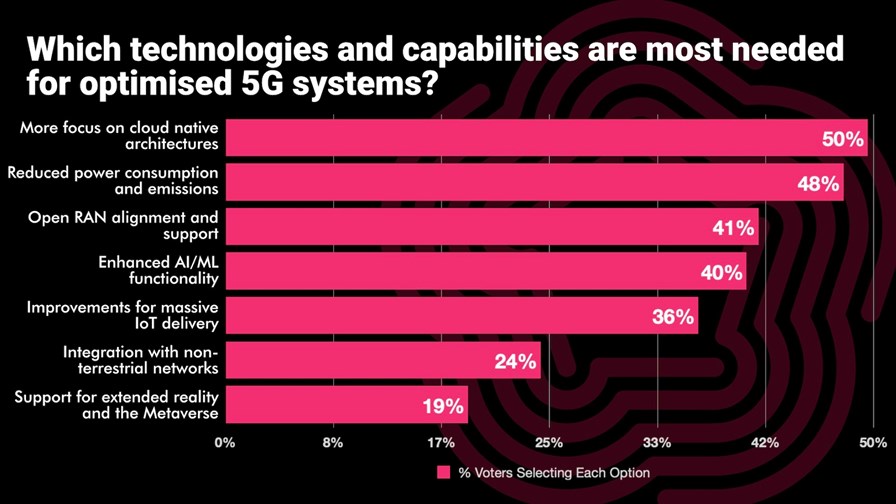 Greater focus on cloud-native architectures and improved energy efficiency is needed to optimise 5G network systems, according to the results of a poll conducted during TelecomTV’s recent 5G Evolution Summit – a mix of interviews, roundtable discussions and live, interactive Q&A panels.

We asked those who attended the online summit to vote in the poll, which asked the question: Which technologies and capabilities are most needed for optimised 5G systems? We offered up seven options, and respondents could vote for as many as they thought were relevant.

The option ‘More focus on cloud-native architectures’ attracted the most votes, cited by 50% of the 100-plus respondents, a result that perhaps shouldn’t come as too much of a surprise to anyone in the industry as we enter the era of 5G standalone and cloud-native core platforms.

Close behind, attracting votes from 48% of respondents, was ‘Reduced power consumption and emissions’. The popularity of that option emphasises the importance the industry is now placing on green, environmentally-friendly networking as well as the pressure of rising energy costs for operators, something that became very apparent when Telia announced its third-quarter results last week and highlighted much higher-than-expected additional energy costs that will impact its full-year earnings.

That this option attracted such a high number of votes was in keeping with our panellists’ expectations: Vendor speakers noted that energy efficiency now dominates their discussions with network operators.

‘Open RAN alignment and support’ attracted a perhaps surprisingly high level of votes, with 41% of respondents identifying it as one of the capabilities most needed for optimised 5G networks, while ‘Enhanced AI/ML functionality’, with 40%, and ‘Improvements for massive IoT delivery’, with 36%, might reasonably have been expected to garner more support.

The options with the least support were related to topics that are currently attracting a lot of attention. ‘Integration with non-terrestrial networks’ (ie. satellite constellations and/or high-altitude platforms, such as dirigibles) was deemed a “must have” for optimised 5G, even though everyone and their dog appears to be launching low-earth orbit (LEO) satellites these days with the aim of covering the earth with internet connectivity and hooking up with 5G networks.

And ‘Support for extended reality and the metaverse’ got the vote of only 19% of respondents. However, developments in this area are moving fast and it seems likely that this particular option might get a lot more support in a year’s time, once there is a better understanding of just what operators will need to deploy to be able to offer high-quality extended reality services.

To catch up with all the sessions from the 5G Evolution Summit, click on this link.