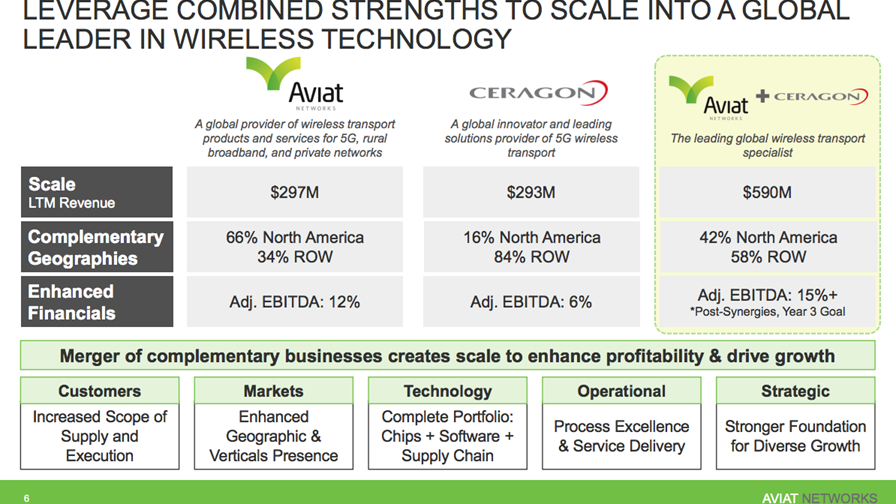 A battle is brewing in the microwave backhaul sector as two of the best-known vendors in the niche but important sector, Aviat and Ceragon, engage in a merger and acquisition (M&A) tussle that looks likely to get messy.

After months of seeking to engage with the Ceragon board over a potential takeover offer, and being met with a less-than-welcoming response, Aviat has gone public with its $235m offer to acquire the Ceragon stock it doesn’t already own (it already holds a 5% stake) so it can combine the two companies and create a stronger, leaner and more significant player in the wireless backhaul market. Aviat has detailed its grievances with the Ceragon board and, along with details of its takeover offer, has published a copy of the letter it has sent to Ceragon, which basically says it has run out of patience and is now taking a more aggressive approach to its consolidation efforts.

As a shareholder owning more than 5% of Ceragon’s stock, Aviat has been able to call for an extraordinary shareholders’ meeting to “elect a refreshed board of directors” that would be open to discuss the takeover offer. That meeting needs to take place within the next couple of months, after which the Aviat team hopes to hold constructive acquisition talks with a new board and then agree and close a takeover within six months. Aviat’s offer to current Ceragon shareholders is for $2.80 in cash per share: Ceragon’s stock had closed on Monday at $2.09 but jumped by 18% in Tuesday trading to $2.47.

Aviat’s argument is that in what is a highly fractured market, a combination of Aviat and Ceragn would create a bigger, stronger single company with annual revenues of about $590m (based on the most recent sales numbers of the two companies). Also, Aviat points out, the two companies are currently strong in different geographic zones: Aviat generates 66% of its sales in North America and 34% in other markets, while Ceragon generates only 16% of its sales in North America and a whopping 84% in other geographic markets.

And the Aviat team clearly doesn’t have a very high opinion of the current Ceragon management team. “The company’s management lacks the ability to extract value from its product portfolio… The current board of directors does not have the best interest of shareholders in mind,” noted Aviat in a presentation putting forward its case for a takeover of Ceragon.

Aviat believes the combination of the two companies would create the market leader in the microwave backhaul and wireless transport technology sector. The main rivals include the large radio access network (RAN) equipment vendors (Ericsson, Huawei, Nokia, Samsung) that sell microwave backhaul and mmWave wireless transport equipment along with their RAN gear, plus NEC and a number of specialists, such as Cambridge Broadband, Cambium Networks and Siklu. That market is set to grow as 5G rollouts continue and as rural fixed fibre broadband networks deployments gather pace (with massive government funding) in markets such as the US – such rural deployments inevitably require wireless backhaul connectivity to link remote sites to traffic aggregation points. According to a market forecast by the Dell’Oro Group, the mobile backhaul transport market alone is expected to be worth $26bn for the five-year period 2022-26, with about two-thirds of those investments dedicated to 5G backhaul.

Investors are clearly on board, as Aviat’s share price gained almost 7% to $27.11 in early trading on Tuesday.

Aviat is clearly intent on setting itself up to be a long-term player that can maximise the available business opportunities in multiple markets. Earlier this year it announced the planned acquisition of Redline Communications to better address the growing opportunity for high-speed wireless transport technology in the private networks sector. That deal worth circa $13m was much friendlier and is set to be completed within the next couple of months.

Ceragon has not yet responded to Aviat’s move, but this battle looks likely to be a war of attrition ahead of the all-important shareholders’ meeting.