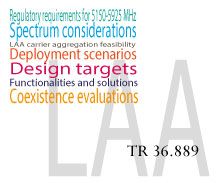 3GPP work on Licensed-Assisted Access (LAA) continues to attract wide industry attention, especially with regard to the coexistence mechanisms being designed for LTE to operate in unlicensed spectrum. Because of this 3GPP RAN has decided to hold an open industry workshop on LAA. The workshop will take place in Beijing on August 29, 2015.

The LAA project was started to study the necessary modifications of LTE to operate in unlicensed spectrum. The project has recently reached an important milestone with the completion of the feasibility study and the approval of the corresponding Technical Report 36.889. Based on the conclusion of the study 3GPP RAN has decided to move the project to normative phase with the specification of LAA downlink operation in Rel-13 (uplink operation will be specified in a later release of LTE). The detailed objectives of the Rel-13 specification work can be found in RP-151045.

The LAA workshop can be an important occasion to exchange views and information on LAA with the interested industry organizations. In particular, 3GPP RAN will present and discuss the results of the LAA feasibility study, with particular focus on the coexistence analysis. Interested parties are warmly invited to join the discussion. The official Liaison Statement and Invitation for the workshop can be found in RP-151095.