Worldwide revenue for security technology forecast to surpass $100 billion in 2020, according to the new IDC Worldwide Semiannual Security Spending Guide

FRAMINGHAM, Mass., October 12, 2016 – The first Worldwide Semiannual Security Spending Guide from International Data Corporation (IDC) forecasts worldwide revenues for security-related hardware, software, and services will grow from $73.7 billion in 2016 to $101.6 billion in 2020. This represents a compound annual growth rate (CAGR) of 8.3%, more than twice the rate of overall IT spending growth, over the five-year forecast period. The new spending guide expands on IDC's previous security forecasts by offering greater detail on spending by geography, industry, and technology.

"Today's security climate is such that enterprises fear becoming victims of the next major cyberattack or cyber extortion," said Sean Pike, program vice president, Security Products. "As a result, security has become heavily scrutinized by boards of directors demanding that security budgets are used wisely and solutions operate at peak efficiency."

The industries making the largest investments in security solutions in 2016 will be banking ($8.6 billion), followed by discrete manufacturing, federal/central government, and process manufacturing. These four industries will deliver 37% of worldwide security revenues this year and will remain the largest industries in terms of total spending throughout the five year forecast. The industries that will see the fastest growth in their security investments will be healthcare (10.3% CAGR), followed by telecommunications, utilities, state/local government, and securities and investment services. Each of these industries will experience CAGRs above 9.0% over the forecast period.

The largest category of investment will be security-related services, which will account for nearly 45% of all security spending worldwide in 2016. The largest segment, managed security services, is forecast to generate revenues of $13 billion this year. Security software will be the second largest category in 2016, with endpoint security, identity and access management, and security and vulnerability management software driving more than 75% of the category's revenues. Finally, security hardware revenues will reach $14.0 billion in 2016, led by purchases of unified threat management systems. One of the fastest growing segments of the security products market will be user behavior analytics software with a CAGR of 12.2%. 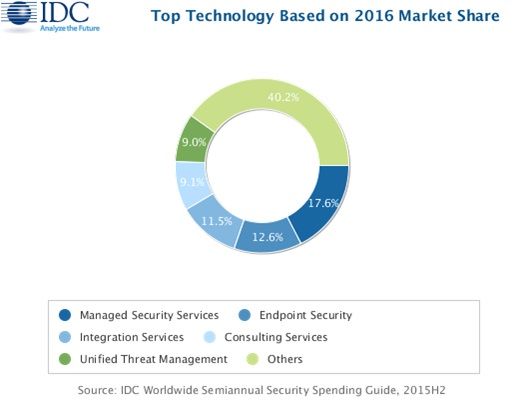 Managed security services will generally be the largest segment of spending among the industries making the largest security investments. Identity and access management software and unified threat management hardware will typically receive the greatest share of revenues in each of these categories.

"The pace and threat of security attacks is increasing every year, especially across compliance-driven industries like healthcare, telecom, government and financial services," said Eileen Smith, program director, Customer Insights and Analysis. "In addition to the traditional challenges of risk and regulatory compliance, digital transformation and the use of 3rd Platform technologies are putting even more pressure on organizations across all industries to develop and execute on a new generation of security measures."

From a geographic perspective, the United States will be the largest market for security products throughout the forecast. In 2016, the U.S. is forecast to see $31.5 billion in security-related investments. Western Europe will be the second largest market with revenues of nearly $19.5 billion this year, followed by the Asia/Pacfic (excluding Japan) region. Asia/Pacfic (excluding Japan) will also be the fastest growing region with a CAGR of 13.8% over the 2016-2020 forecast period, followed by the Middle East & Africa (MEA) and Western Europe.

The Worldwide Semiannual Security Spending Guide quantifies the global revenue opportunity for both core and next-generation security purchases. The guide offers detailed forecast data for security spending by 20 industries across eight regions and 53 countries. Unlike any other research in the industry, the comprehensive spending guide was designed to help IT decision makers to clearly understand the industry-specific scope and direction of security-related spending today and over the next five years.