UTM and firewall growth drive the worldwide security appliance market expansion in Q2 2017, according to IDC

The trend for growth in the worldwide market driven by the Unified Threat Management (UTM) sub-market continues, with UTM reaching record-high revenues of $1.6 billion in 2Q17 and year-over-year growth of 16.8%, the highest growth among all sub-markets. The UTM market now represents more than 50% of worldwide revenues in the security appliance market. The Firewall and Content Management sub-markets also had positive year-over-year revenue growth in 2Q17 with gains of 9.5% and 6.4%, respectively. The Intrusion Detection and Prevention and Virtual Private Network (VPN) sub-markets experienced weakening revenues in the quarter with year-over-year declines of 11.7% and 1.3%, respectively.

The United States delivered 41% of the worldwide security appliance market revenue and was the major driver for spending in Q2 2017 with 9.2% year-over-year growth. Asia/Pacific (excluding Japan)(APeJ) had the strongest year-over-year revenue growth in 2Q17 at 20.9% and captured 23.9% revenue market share. The more mature regions of the world – the United States and EMEA – combined to provide nearly two thirds of the global security appliance market revenue. Both regions had positive growth in the single-digit range. Europe, the Middle East and Africa (EMEA) saw an annual increase of 2.3%. Asia/Pacific (including Japan)(APJ) and the Americas (Canada, Latin America, and the U.S.) experienced year-over-year growth of 17.2% and 8.8%, respectively.

"Over the last quarter, there has been growth in every region with particularly strong growth in Asia/Pacific. Firewall and UTM continue to be the strongest areas of growth, as those products continue to add security features leveraging and addressing cloud protection." said Robert Ayoub, research director, Security Products at IDC. 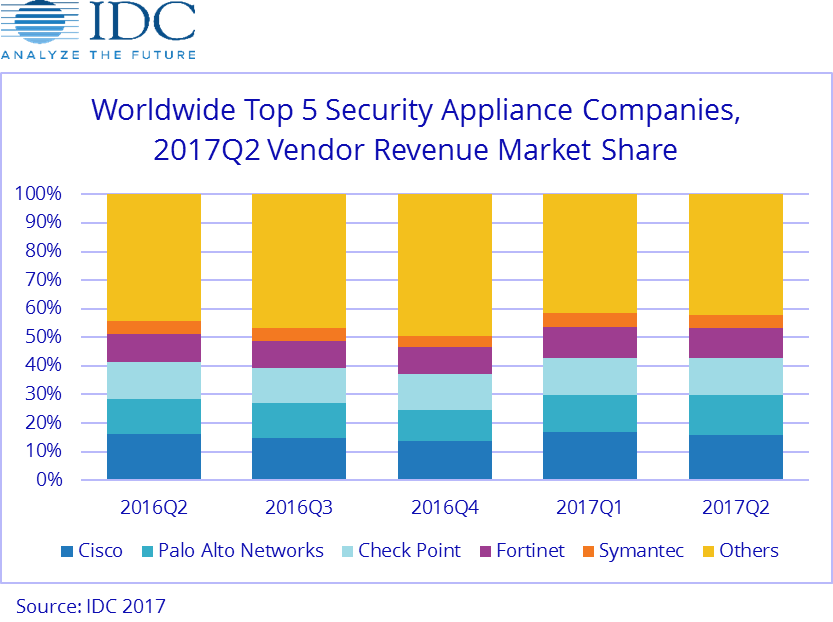