Combination Will Create Thousands of American Jobs and Boost U.S. Economic Growth with Planned $40 Billion Investment in its Business and Next-Generation 5G Network

Bellevue, Washington and Overland Park, Kansas – T-Mobile US (NASDAQ: TMUS) and Sprint Corporation (NYSE: S) today announced they have entered into a definitive agreement to merge in an all-stock transaction at a fixed exchange ratio of 0.10256 T-Mobile shares for each Sprint share or the equivalent of 9.75 Sprint shares for each T-Mobile US share. Based on closing share prices on April 27, this represents a total implied enterprise value of approximately $59 billion for Sprint and approximately $146 billion for the combined company. The new company will have a strong closing balance sheet and a fully funded business plan with a strong foundation of secured investment grade debt at close. 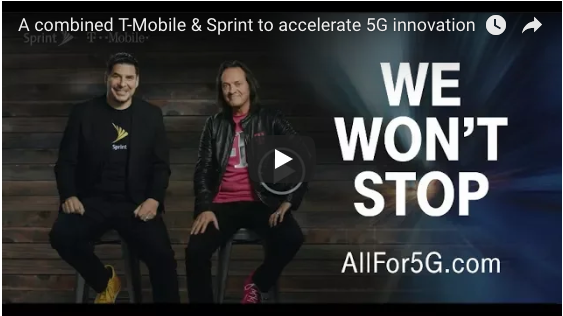 The combined company will be named T-Mobile, and it will be a force for positive change in the U.S. wireless, video, and broadband industries. The combination of spectrum holdings, resulting network scale, and expected run rate cost synergies of $6+ billion, representing a net present value (NPV) of $43+ billion will supercharge T-Mobile’s Un-carrier strategy to disrupt the marketplace and lay the foundation for U.S. companies and innovators to lead in the 5G era.

The New T-Mobile will have the network capacity to rapidly create a nationwide 5G network with the breadth and depth needed to enable U.S. firms and entrepreneurs to continue to lead the world in the coming 5G era, as U.S. companies did in 4G. The new company will be able to light up a broad and deep 5G network faster than either company could separately. T-Mobile deployed nationwide LTE twice as fast as Verizon and three times faster than AT&T, and the combined company is positioned to do the same in 5G with deep spectrum assets and network capacity.

The combined company will have lower costs, greater economies of scale, and the resources to provide U.S. consumers and businesses with lower prices, better quality, unmatched value, and greater competition. The New T-Mobile will employ more people than both companies separately and create thousands of new American jobs.

“This combination will create a fierce competitor with the network scale to deliver more for consumers and businesses in the form of lower prices, more innovation, and a second-to-none network experience – and do it all so much faster than either company could on its own,” said John Legere. “As industry lines blur and we enter the 5G era, consumers and businesses need a company with the disruptive culture and capabilities to force positive change on their behalf.”

“The combination of these two dynamic companies can only benefit the U.S. consumer. Both Sprint and T-Mobile have similar DNA and have eliminated confusing rate plans, converging into one rate plan: Unlimited,” said Marcelo Claure. “We intend to bring this same competitive disruption as we look to build the world’s best 5G network that will make the U.S. a hotbed for innovation and will redefine the way consumers live and work across the U.S., including in rural America. As we do this, we will force our competitors to follow suit, as they always do, which will benefit the entire country. I am confident this combination will spur job creation and ensure opportunities for Sprint employees as part of a larger, stronger combined organization, and I am thrilled that Kansas City will be a second headquarters for the merged company.”

Creating #5GforAll – the Only Broad and Deep 5G Nationwide Network

It is critically important that America and American companies lead in the 5G era. Early U.S. leadership in 4G fueled a wave of American innovation and entrepreneurship that gave rise to today’s global mobile Internet leaders, creating billions in economic value and job growth. America’s early 4G leadership is credited with creating 1.5 million jobs and adding billions to the U.S. GDP. With 5G, the stakes are even higher – because 5G will be even more transformational.

Only the combined company will have the network capacity required to quickly create a broad and deep 5G nationwide network in the critical first years of the 5G innovation cycle – the years that will determine if American firms lead or follow in the 5G digital economy. With Sprint’s expansive 2.5 GHz spectrum, T-Mobile’s nationwide 600 MHz spectrum, and other combined assets, the New T-Mobile plans to create the highest capacity mobile network in U.S. history. Compared to T-Mobile’s network today, the combined company’s network is expected to deliver 15x faster speeds on average nationwide by 2024, with many customers experiencing up to 100x faster speeds than early 4G.

Neither company standing alone can create a nationwide 5G network with the breadth and depth required to fuel the next wave of mobile Internet innovation in the U.S. and answer competitive challenges from abroad.

Neither can AT&T and Verizon in the near term, even though they will still respectively own 34% and 172% more spectrum than the combined company. Even with their vast resources, AT&T and Verizon cannot rapidly build nationwide 5G and their planned 5G networks will only be available sporadically in just a handful of very limited areas. To build nationwide 5G, they either have to kick current customers off LTE, which would take years, or use a type of spectrum (millimeter wave) that can only carry a signal 2,000 feet from a cell site – versus multiple miles for other spectrum – making it nearly impossible for either of them to create a truly nationwide 5G network quickly.

Ubiquitous high-speed 5G service and Internet of Things (“IoT”) capabilities will ignite innovation across industries and create the conditions for U.S. firms and innovators to lead the globe in the 5G era.

“Going from 4G to 5G is like going from black and white to color TV,” added Claure. “It’s a seismic shift – one that only the combined company can unlock nationwide to fuel the next wave of mobile innovation.”

5G for All will unleash incredible benefits and capabilities for consumers and businesses. Imagine, for example, augmented reality heads-up displays that see everything you do, and provide real-time cloud-driven information about the people and objects around you. Imagine never losing anything again because low-cost sensors with decade long battery life are embedded in everything you own. Imagine an earpiece providing real-time translation as a friend speaks to you in another language. Imagine environmental sensors in infrastructure and for agriculture having a profound impact on productivity.

The new company expects prices to drop as competition heats up. The New T-Mobile will have lower costs, greater economies of scale, and unprecedented network capacity – a winning combination that should make wireless, and adjacent industries like cable and broadband, more affordable for everyone.

The combination will dramatically accelerate T-Mobile’s successful Un-carrier strategy, which is built around listening to customers and solving their pain points. It will also leverage Sprint’s incredible spectrum assets and strong DNA.

The deal will create more competition and unmatched value for customers across the country. And, existing T-Mobile and Sprint customers will benefit from increased speeds, coverage, and performance as the two companies’ networks combine.

Wireless, broadband, and video markets are rapidly converging. AT&T is now the largest TV provider in the country. Comcast added more wireless phone customers last year than AT&T and Verizon combined, and Charter is launching wireless this year. And, more than 1 in 10 Americans (12%) use wireless as their only Internet or broadband connection, freeing themselves from the grip of the traditional, uncompetitive in-home broadband providers.

“This isn’t a case of going from 4 to 3 wireless companies – there are now at least 7 or 8 big competitors in this converging market. And in 5G, we’ll go from 0 to 1. Only the New T-Mobile will have the capacity to deliver real, nationwide 5G,” added Legere. “We’re confident that, once regulators see the compelling benefits, they’ll agree this is the right move at the right time for consumers and the country.”

In this rapidly converging marketplace, the new company will bring more choice and competition – for all consumers, including three key underserved areas:

From the first day Sprint and T-Mobile combine and every year thereafter, the new company will employ more people in the U.S. than both companies would separately. More than 200,000 people will work on behalf of the combined company in the U.S. at the start. And, the New T-Mobile plans to invest up to $40 billion in its new network and business in the first three years alone, a massive capital outlay that will fuel job growth at the new company and across related sectors. This is 46% more than T-Mobile and Sprint spent combined in the past three years.

This combination will also force AT&T, Charter, Comcast, Verizon, and others to make investments of their own to compete, driving billions more in accelerated investment.

Five years ago, T-Mobile merged with MetroPCS to compete in the 4G era – a transaction that has resulted in substantial job growth. Three times the number of people work on MetroPCS today compared to the time of the acquisition in 2013. With that track record, the New T-Mobile will accelerate long-term economic stimulus for the U.S. in the 5G era -- ultimately leading to the creation of thousands of American jobs and supporting business opportunities for the U.S. economy.

5G is expected to create 3 million new U.S. jobs and $500 billion in economic growth by 2024, according to a report from CTIA, and the combined company will be a catalyst in driving that massive economic stimulus.

The new company expects to create substantial value for T-Mobile and Sprint shareholders through an expected $6+ billion in run rate cost synergies, representing a net present value (NPV) of $43+ billion, net of expected costs to achieve such cost synergies. This transaction will also enhance the financial position of the combined company. Highlights include:

The Boards of Directors of T-Mobile and Sprint have approved the transaction. Deutsche Telekom and SoftBank Group are expected to hold approximately 42% and 27% of diluted economic ownership of the combined company, respectively, with the remaining approximately 31% held by the public. The Board will consist of 14 directors, 9 nominated by Deutsche Telekom and 4 nominated by SoftBank Group, including Masayoshi Son, Chairman and CEO of SoftBank Group, and Marcelo Claure, CEO of Sprint. John Legere, CEO of the New T-Mobile, will also serve as a director. Upon consummation of the transaction, the combined company is expected to trade under the (TMUS) symbol on the NASDAQ.

The new company will have some of the most iconic brands in wireless – T-Mobile, Sprint, MetroPCS, Boost Mobile, Virgin Mobile – and will determine brand strategy after the transaction closes.

T-Mobile and Sprint will host a conference call for investors and media at 12:30 PM Eastern Time today (9:30 AM Pacific Time) to discuss this announcement.