[Tianjin, China, October 11, 2016] Huawei Marine today announced that it will help Papua New Guinea (PNG) to build a national broadband transmission network to meet the increasing demand for internet connectivity and help foster social and economic development across the country. 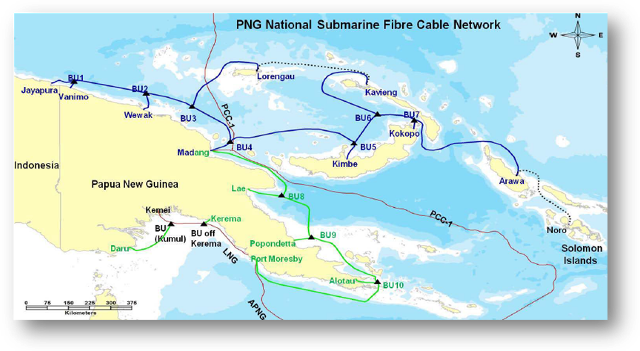 At 5, 457km in length, the submarine cable network will provide domestic connectivity across 14 main cities (PNG’s largest population centers) and international connectivity via a link to Jayapura in Indonesia.

The design capacity of the system is 8 Terabits per second (Tbps), which will cater for increased bandwidth demand over the next 10-15 years. When completed, the network will cover 55% of the population and will provide more than 70% of Papua New Guinea’s domestic bandwidth requirements.

“This new system is very important to Papua New Guinea as it not only includes a new submarine cable network but also provides internet gateways and data centres. This will improve the whole ICT infrastructure in the country and greatly increase network coverage, capacity and the availability of Internet and broadband services to end users. DataCo is proud to contribute to the national broadband plan in the country. Our selection of the experienced team at Huawei Marine, following a tender process, will ensure a successful implementation and delivery of this system.”

“For island nations, submarine cable systems are key components required for the development of an affordable and effective ICT infrastructure. We are proud to be partnering with DataCo to improve and expand telecommunication access in support of Papua New Guinea’s social and economic development.