With the aim of preventing global warming, there is a demand for energy-saving in data centers, particularly with air-conditioning equipment, which can account for between 30% and 50% of total electricity use. Now, to flexibly respond to the dynamic status changes that are issues unique to data centers, such as moving information equipment in and out and changing rack arrangements, Fujitsu Laboratories has developed a highly accurate prediction technology that sequentially builds a model that predicts air-conditioning effects from collected data, enabling reductions in air conditioner energy use.

Details of this technology will be announced at the European Control Conference (ECC) 2016, an international conference which will be held June 29th in Aalborg, Denmark.

In order to reduce data center energy use, it is both important and effective to reduce the energy consumed by air-conditioning equipment, which accounts for between 30% and 50% of a data center's total energy use. Existing data center air-conditioning equipment operates on the basis of information from a variety of installed sensors so as to maintain the target temperature and humidity even when the operating rate of the ICT equipment it contains, such as servers, increases. When sensor data exceeds a set value, the system carries out rapid cooling for safety reasons, which causes air-conditioning to operate excessively.

In contrast, by using a method called model-based control (Figure 1), which is used in blast furnaces, automobiles, and robotics to predict future values, reductions in air-conditioning energy consumption in line with less excessive operations can be expected. However, the devices installed in the data center, such as information devices and air-conditioning equipment, as well as their layout, can change frequently (Figure 2). This means that the model, once built, will diverge from reality over time, reducing prediction accuracy and making it difficult to use in data centers. 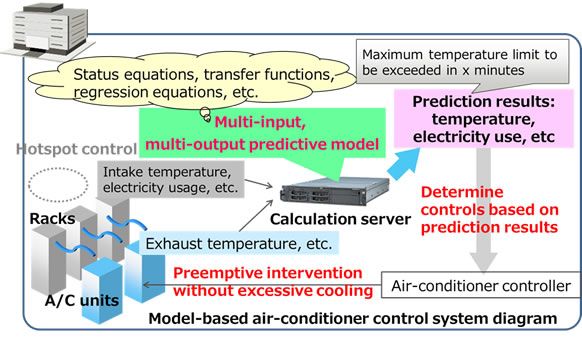 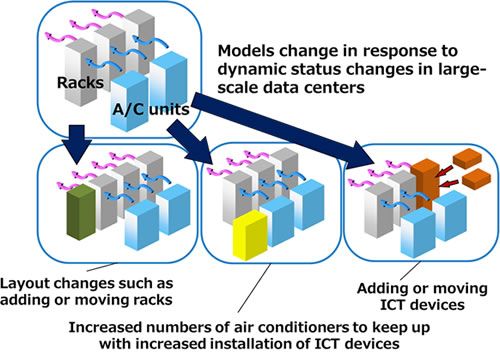 In order to use model-based control in data centers, Fujitsu Laboratories applied Just in Time (JIT) modeling (Figure 3), which can build a model in response to a situation. With existing JIT modeling, useful information is selected from sensor data, including temperature and humidity, through mathematical processing, and this data is used to create a predictive model and calculate predicted values. With the sensor data alone, however, this method does not select enough useful information to immediately reflect the status of dynamic changes in the data center, making highly accurate predictions difficult. This new technology now creates a database that incorporates the status of air-conditioning equipment, including the utilization rate of machines and fan speed, and has a requirement to not only select useful information against prediction targets, but also to automatically select at least one variable from the air-conditioning equipment status database. By creating a highly accurate predictive model using the selected variables (Figure 4), this technology succeeds in improving predictive accuracy. Fujitsu Laboratories has thus created a highly accurate predictive technology that can respond to the frequent changes in the state of a data center by building sequential models. 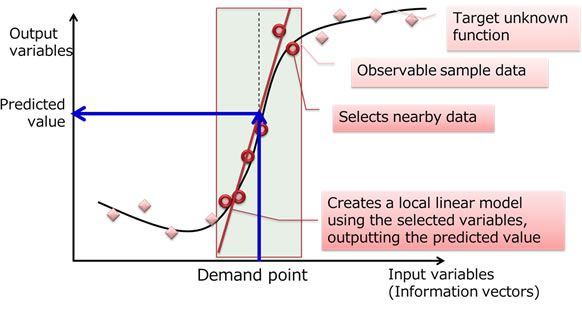 With regard to this newly developed technology, Fujitsu Laboratories conducted a simulation using actual 100-rack scale data, and confirmed it was possible to predict the temperature of servers' air supply with high accuracy, within an average margin of ± 0.17°C and maximum ± 2.1°C, even in a frequently changing environment. Fujitsu Laboratories applied these results to simulated conditions for a 1,000-rack data center with servers that would consume about 70 million kWh/year, and air-conditioning that would use 22 million kWh/year, and calculated that, with the application of this technology, such a data center could expect to save 4.5 million kWh in electricity consumption, a reduction of about 20%. With this technology, Fujitsu Laboratories is improving energy saving at data centers, where electricity usage is expected to grow, contributing to preventing the warming of the planet's environment.

Fujitsu Laboratories will be conducting field trials of this technology throughout fiscal 2016 at data centers operated by Fujitsu Limited, after which it is scheduled to be put into actual operation in fiscal 2017, and incorporated into Fujitsu's operations management infrastructure software "FUJITSU Software ServerView Infrastructure Manager."