Murray Hill, NJ - Nokia Bell Labs announces a breakthrough in small cell technology that offers greater flexibility, efficiency and optimized deployment economics to expedite the creation of the high capacity and low latency network that will form the digital fabric of the future for humans and machines. "F-Cell" technology eliminates the costly power and backhaul wires and fibers currently required for small cell installation to enable "drop and forget" small cell deployments anywhere. 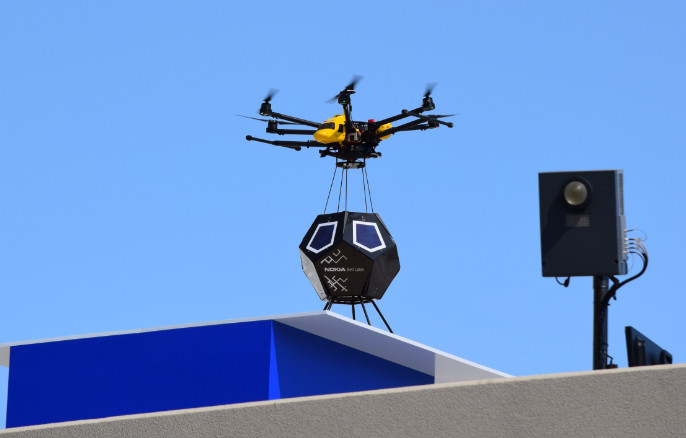 Bell Labs recently demonstrated the world's first drone-based delivery of an F-Cell to a Nokia office rooftop in Sunnyvale, CA. (captured in photo). The F-Cell wirelessly self-powered, self-configured and auto-connected to the network and instantly began to stream high-definition video.

Underlying the F-Cell breakthrough is a re-imagining of the network architecture to place key functional elements in optimum locations. The F-cell architecture is comprised of a closed loop, 64-antenna massive MIMO system placed in a centralized location that is used to form 8 beams to 8 energy autonomous (solar powered) F-Cells, each of which has been redesigned to require minimum processing power so that the solar panel is no larger than the cell itself. In this way, F-Cell technology sustainably solves today's small cell and backhaul cabling, deployment and expense challenges for service providers and enterprises.

The architecture supports non-line-of-sight wireless networking in frequency division duplex (FDD) or time division duplex (TDD) mode, and the parallel operation of up to 8 individual 20 MHz channels allowing for a system throughput rate of ~1Gbit/s over existing LTE networks. In future, this architecture will scale to enable up to tens of Gbit/s using higher spectral bandwidth, new spectral bands and a larger number antenna arrays.

"F-Cell is a key breakthrough in massively scalable and massively deployable technology that will allow networks to deliver seemingly infinite capacity, imperceptible latency and connectivity to trillions of things," said Marcus Weldon, president of Nokia Bell Labs and Nokia CTO. "Nokia Bell Labs is again excited to re-invent the future and help drive what we believe will be a technological revolution, underpinned by the creation of a new digital network fabric that will transform human existence."

F-Cell advances Nokia's Future X Network vision of 100x capacity growth and 100x reduction in latency, with optimized, facile deployment economics to explore the human possibility of technology at speed and with the creation of new value.