Samsung calls for IT industry to “think differently” about IoT 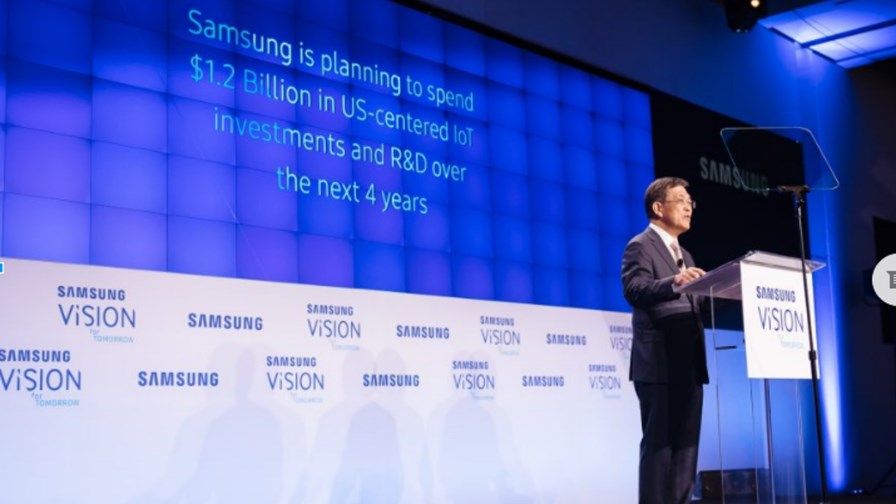 Samsung is determined to catch the IoT wave as the world’s developed smartphone markets saturate and the developing markets choose low priced models. Like many other communications/IT vendors and service providers it sees IoT and M2M as the next stop for the global IT market and it would like it to hurry along to fill a looming revenue gap.

Dr Kwon pledged a $1.2 billion spend over four years directed to two Samsung centres in the US -  Samsung Strategy and Innovation Center, Global Innovation Center and Samsung Research America.  This is the latest in a series of IoT moves, most notably a trumpet blast sounded about a year ago when Samsung’s chief executive, BK Yoon, announced a $100 million fund for IoT developers with a view to kick-starting an open system approach to the emerging market. “We can deliver the benefits of IoT only if all sensors can talk to each other,” Yoon said.

Back then we noted that a ‘read between the lines’ indicated that Samsung saw the data collection potential of IoT and wanted to position itself in the middle as chief information gatherer - not exactly an uplifting vision for the next IT wave.

For this outing Vice Chairman Kwon posited a social benefits vision and urged policy-makers and industry leaders to  “start talking and thinking differently about IoT.”  Less about monetising and gadget-selling. More about bringing benefits to society at large.

Kwon talked of a  human-centered approach, embracing the life-changing possibilities of the technology.

“Today, IoT is changing individual lives – helping people to age in their own homes. But tomorrow, using IoT, we can give the same independence to millions of Americans. We can keep people out of hospitals and nursing homes. As our populations live longer, these benefits and cost savings for society cannot be ignored.”

So what’s the problem? Samsung is worried that ‘sector-specific regulations’ could fragment the global development of IoT, preventing easy connectivity and holding back the essential scale benefits that the technologies need to make a major and immediate impact.  Hence the Washington venue and the attempt to get policy-makers informed and on-board.