[Dubai, UAE, October 30, 2017] Huawei signed an agreement with two global companies to promote the growth of the Internet of Things (IoT) and build a IoT ecosystem in the Middle East: Nextek Solutions, a global IT & software provider and integrator, and Quectel, a leading supplier of wireless modules. The two entities will cooperate with Huawei to build Narrowband IoT (NB-IoT) solutions that target the needs of regional organizations.

In the Middle East, the Internet of Things is being driven by Smart Cities. Governments from this region have made smart city expansion a key goal of their national agendas, leading to the deployment of innovative projects that stand as a reference for smart city development worldwide. The Smart City Center of Excellence in Dubai acts as a platform for industry leaders to share their knowledge and collaborate to keep progressing the field.

“Huawei believes that the key to driving Smart City development in the region is to create an ecosystem of partners and vendors working together to co-create solutions that precisely target the needs of their respective vertical sector,” says Su Wang, Vice President of Marketing, Huawei Middle East. “We are eager to work with partners like Nextek and Quectel to drive IoT development and commercialization in the region. Through joint investments and collaboration between manufacturers, operators, ICT providers, application software developers, research institutes, and even governments, the pace of growth of IoT will keep accelerating.”

“Nextek is very eager to cooperate with Huawei for IoT and Smart Cities project in the Middle East and globally. We understand the local markets very well and the need for IoT solutions for various verticals. Nextek is well positioned to contribute as a software provider and integrator,” said Karim Rahemtulla, Managing Director of Nextek.

“As one of the first NB-IoT module manufacturers in the world, Quectel is willing to explore the Middle East market together with partners across the industrial chain including operators, local IoT device vendors and distributors to contribute to the smart city vision in the Middle East region,” said Doron Zhang, Senior Vice President of Quectel. 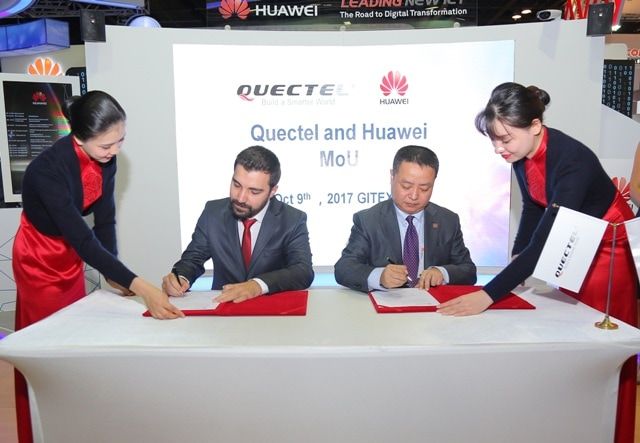 Huawei has been active in IoT development across the Middle East, collaborating with Etisalat to launch the first successful trial of Smart Parking in the region. Huawei partners with Jeddah Municipality to implement groundbreaking smart city solution in the region. Zain has already deployed IoT solutions in KSA with the help of Huawei, aimed at ensuring a better life for its citizens.

In order to accelerate the development of the IoT industry and enrich the ecosystem, Huawei has deployed its Hosting Center that serves as a secure platform for operators in the region. Huawei’s OpenLab in Dubai provides regional partners with a platform to test and customize a variety of technologies to target the vertical sectors most relevant to the Middle East, particularly Public Safety, Smart Cities, Transportation, Education, and Oil & Gas.