Sumitomo Chemical's Three-Year Corporate Business Plan stresses the importance of "Business and Work Process Innovation Through IoT" as one of its strategic initiatives for sustainable growth. The Company is working proactively, among other things, to realize a digital plant by leveraging IoT technologies and promote greater real-time visibility and sophistication in the Sumitomo Chemical Group's global supply chain information management.

Sumitomo Chemical considers it essential to reduce a variety of risks it faces in the IoT era of ubiquitous connectivity by deploying and strengthening multi-layered networks in order to minimize potential damage from cyberattacks and unexpected failures.

The new network infrastructure at Sumitomo Chemical's Chiba Works has been designed and constructed around NEC's SDN-compatible product, the UNIVERGE PF series. Primary features include the following:

The benefits of implementing SDN at Sumitomo Chemical's Chiba Works include the following: 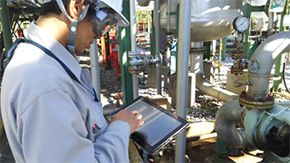