Neil Mawston, Executive Director at Strategy Analytics, added, “Samsung shipped 71.5 million smartphones worldwide in Q2 2018, tumbling 10 percent annually from 79.5 million units in Q2 2017. This was Samsung’s worst quarterly performance since the third quarter of 2016. Samsung is being squeezed by Chinese rivals, like Xiaomi and Huawei, across major Asian markets such as China and India. Huawei soared 41 percent annually from 38.4 million smartphones shipped worldwide during Q2 2017 to a record 54.2 million units in Q2 2018. Huawei overtook Apple for the first time ever to become the world’s second largest smartphone vendor. Huawei captured 15 percent global smartphone marketshare in the quarter. Huawei’s midrange Android models, such as Nova 2S and Nova 3e, are proving wildly popular across Asia and Europe.”

Woody Oh, Director at Strategy Analytics, added, “Apple grew an above-average 1 percent annually and shipped 41.3 million iPhones for 12 percent smartphone marketshare worldwide in Q2 2018. Apple continues to grow in smartphones, but at a much slower pace than key Chinese rivals such as Huawei and Xiaomi. Apple will need to innovate new designs for the iPhone if it wants to grow future volumes, perhaps by adding new features such as dual SIM cards or foldable screens.”

Linda Sui, Director at Strategy Analytics, added, “Xiaomi shipped an impressive 32.0 million smartphones and held fourth position with a record 9 percent global marketshare in Q2 2018, lifting from 6 percent share a year ago. Xiaomi’s growth increased 38 percent annually in the quarter, but this was down from the 58 percent rate it hit a year ago. Xiaomi is now slowing, due to fresh competition from Huawei in its key markets of India and China. OPPO held fifth place, capturing 9 percent global smartphone marketshare in Q2 2018, up slightly from 8 percent a year ago. OPPO has been hit hard by Xiaomi’s rapid expansion in the past year, but OPPO is finally stabilizing and fighting back with keener pricing and enhanced new models such as the R15 with dual SIM cards.” 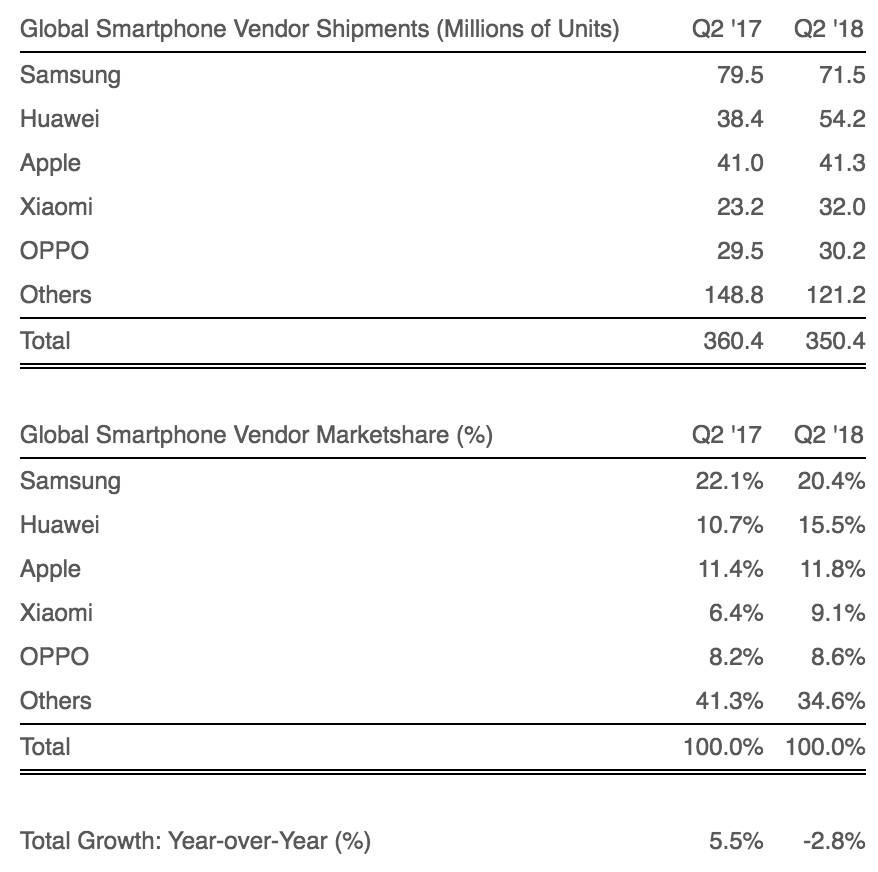 The full report, Huawei Overtakes Apple as Global Smartphone Shipments Hit 350 Million in Q2 2018 , is published by the Strategy Analytics Wireless Smartphone Strategies (WSS) service, details of which can be found here: https://tinyurl.com/y75uhw62.