Powering the Internet with renewable energy

Today we're announcing the largest, and most diverse, purchase of renewable energy ever made by a non-utility company. Google has already committed to purchase more renewable energy than any other company. Now, through a series of new wind and solar projects around the world, we’re one step closer to our commitment to triple our purchases of renewable energy by 2025 and our goal of powering 100% of our operations with clean energy.

842 MW of renewable energy around the world

Today’s agreements will add an additional 842 megawatts of renewable energy capacity to power our data centers. Across three countries, we’re nearly doubling the amount of renewable energy we’ve purchased to date. We’re now up to 2 gigawatts—the equivalent to taking nearly 1 million cars off the road.

These additional 842 megawatts represent a range of locations and technologies, from a wind farm in Sweden to a solar plant in Chile. 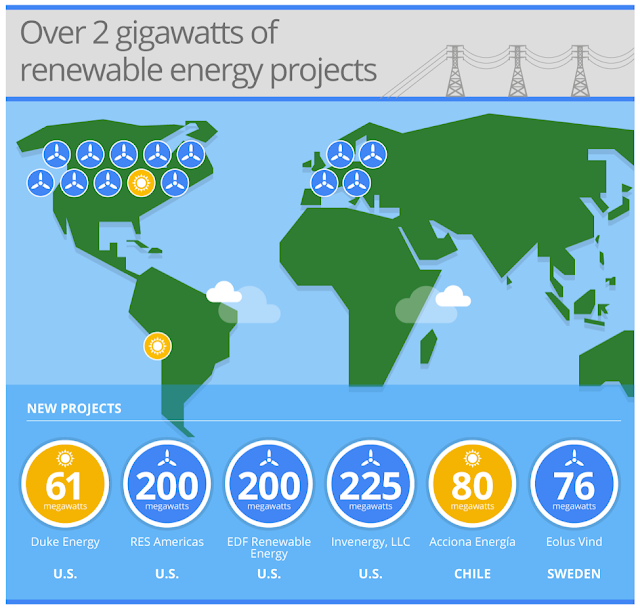 These long-term contracts range from 10-20 years and provide projects with the financial certainty and scale necessary to build these wind and solar facilities—thus bringing new renewable energy onto the grid in these regions. For our part, these contracts not only help minimize the environmental impact of our services—they also make good business sense by ensuring good prices.

Our commitment to a sustainable energy future

Since we opened our very first owned data center in 2006, we’ve been working to promote renewable and sustainable energy use in several ways:

And we’re also working on new technologies and ideas—ranging from Project Sunroof to Makani Power to air quality monitoring—that we hope can make a cleaner energy future an option for many more people.

With world leaders coming together at the COP21 UN conference on climate change in Paris this week, there's no better time to focus on renewable energy. We hope that our efforts play a small part in boosting all of us in the race to solve climate change.