SINGAPORE, November 17th, 2017 - China's Singles' Day has grown beyond a Chinese online sales campaign into an international, omni-channel, retail-as-entertainment festival. This year, we saw an extension of the "New Retail" into a wider physical footprint. The festival has become a significant event – China digital natives are now leading the way with new forms of retail such as "retail-tainment", while flexing its economic and commercial influence outside China. Singles' Day has also become an international affair in many ways. For example, Lazada Thailand mirrored Alibaba's Singles' Day practice to host a massive televised gala with celebrities counting down until the shopping deals began at midnight.

Alibaba's gross merchandise value (GMV) grew by 42.9 percent to US$25.3 billion, while its competitor JD.com reported US$19.1 billion in GMV generated, or up 50 percent from a year ago. In countries outside of China, Lazada reported US$123 million of GMV generated, a 171 percent increase from 2016. Reports by Alibaba shows that Asia is indeed a mobile-first economy, with 90 percent of transactions done via mobile and tablets, up from 82 percent in 2016.

"A key highlight this year was how eTailers started to open up more offline retail stores and offer the same discounts online in their offline retail shops. This helps to provide consumers with a better shopping experience and gives them the option of being able to physically see and touch the item and being able to purchase these items with the online discount. This is also beneficial for eTailers from the logistics perspective as it reduces the number of deliveries that they may need to make during the sales period," says Tay Xiaohan, Research Manager for Client Devices Team, IDC Asia/Pacific.

Some key highlights of the 11.11 sales this year include:

• There was generally better integration between eTailers as well as the third-party retail shops. For example, consumers can head to specific clothing shops, try on the clothes and purchase it using the online discount. This option also enables retailers to provide consumers with a better shopping experience with more consumer touchpoints.

• eTailers also experimented with new offers, e.g. a 30-day price guarantee. If the prices of certain items drop within 30 days after consumers purchased the items before Singles' day, eTailers promised to refund the difference to them.

• eTailers social and gamification expanded from an individual-centric interaction to community-centric. For example, instead of the usual individualistic red packet game for consumers, this year, they added an element where consumers had to team up with their friends to form teams to attempt to snatch red packets. Elsewhere, brands were also found using games to generate buzz and anticipation in days leading up to Singles' Day.

"Coined by Alibaba as the 'New Retail', online-to-offline (O2O) commerce is part of Alibaba's ambition to shake up China's retail market, while extending the market in its maturing e-commerce business. The idea is to connect virtual and offline worlds, drawing more customers onto its network to boost transactions while amassing valuable purchasing data which feeds into the rest of its ecosystem. We expect this to be even more prominent with the other eTailers in the coming years," says Lawrence Cheok, Senior Research Manager for Digital Commerce, IDC Asia/Pacific.

From a consumer electronics perspective, many key devices saw good growth during the Singles' Day eTailer sale between 1-11 November 2017. Specific details can be found in the additional charts below. 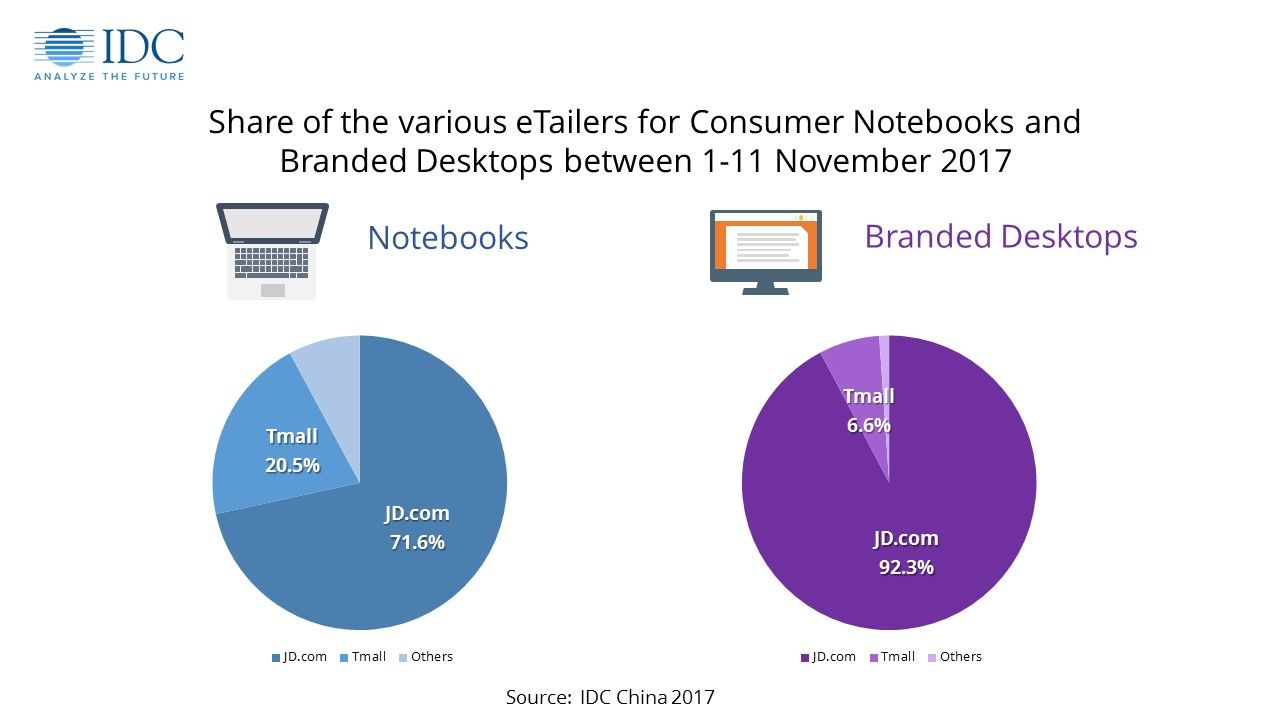 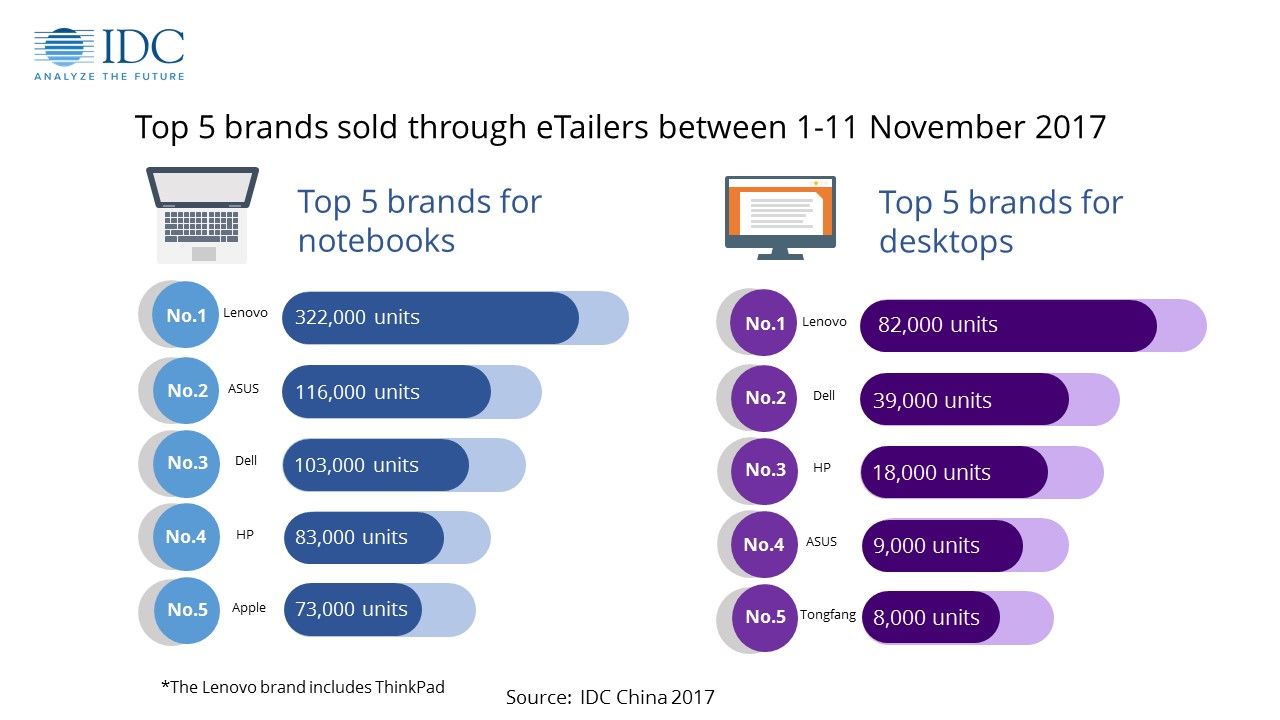 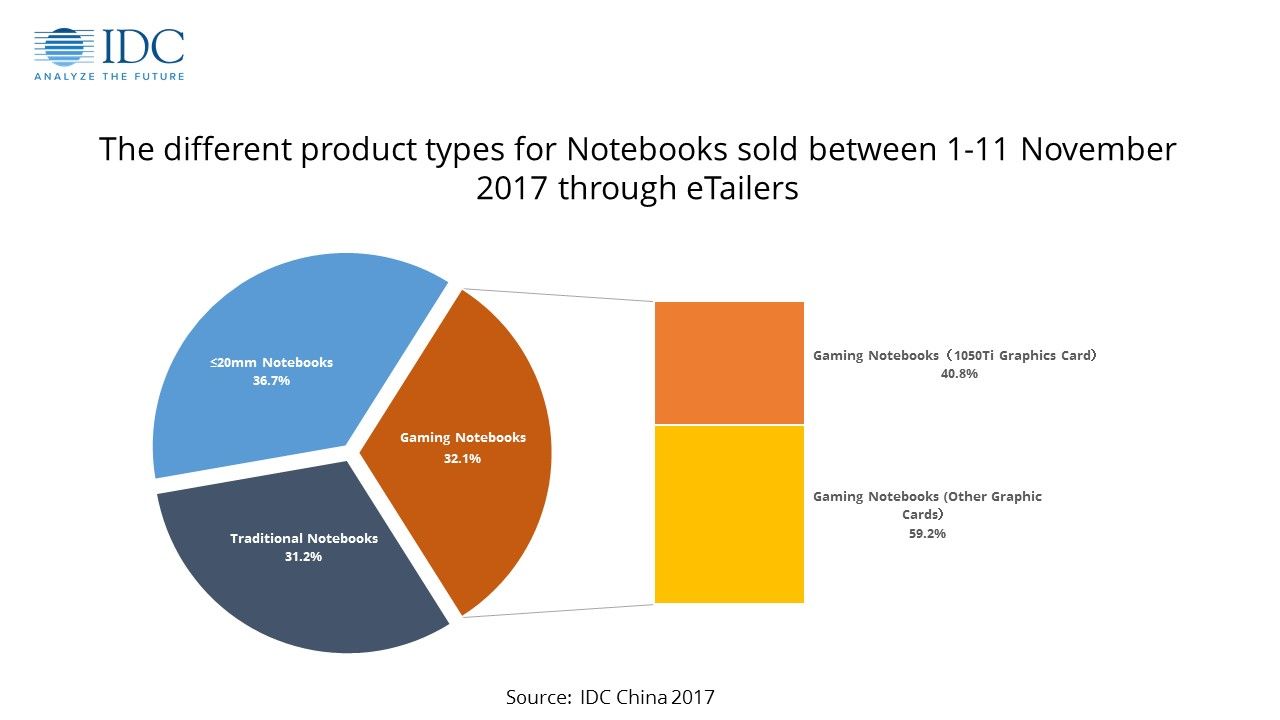 Smartphones : China-based brands such as Honor and Xiaomi were aggressive during the sale and had higher numbers compared to that of Apple in the eTailer channel. Honor topped the market largely due to its Honor 8 (Youth version) and Honor Changwan series. For Xiaomi, its Redmi 4X and Redmi Note series contributed significantly to its numbers. Apple was at the third position with the launch of the iPhone 8 and 8 Plus in September contributing partially to it.

Tablets : For tablets, Apple topped the market while Huawei (including Honor) was a close second. 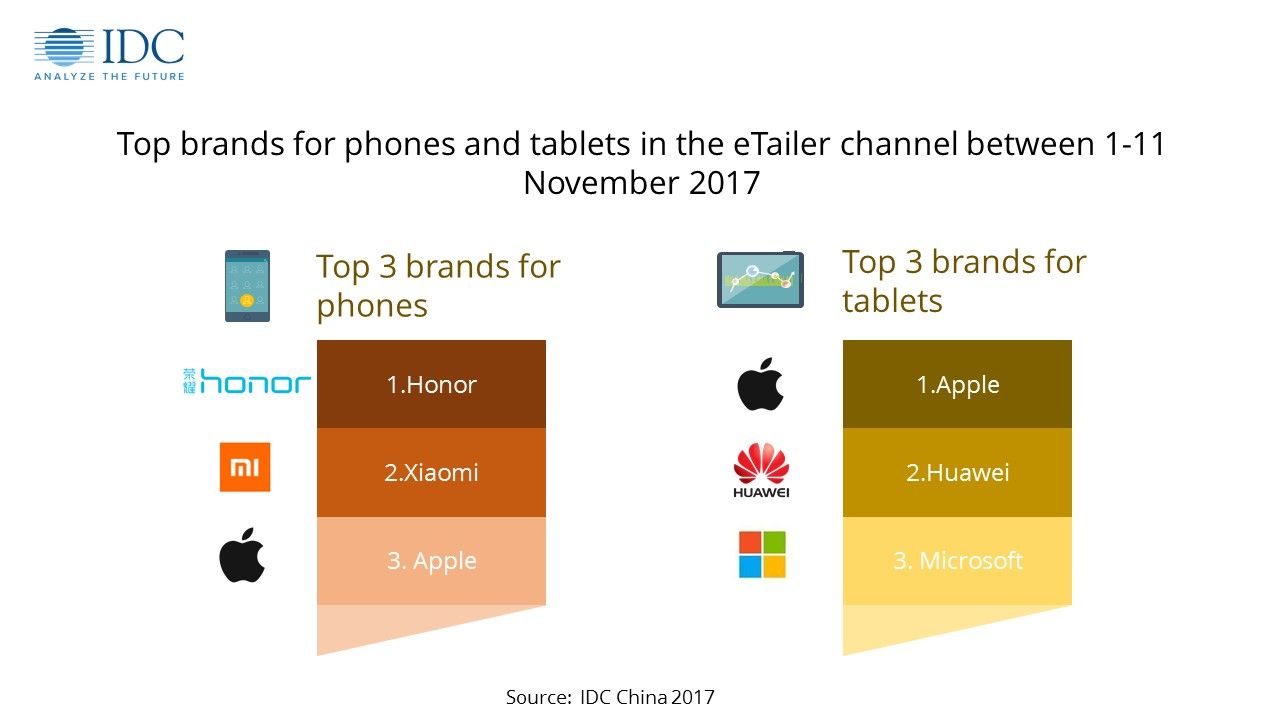 Monitors and Projectors : Not only did the 1080P projectors increase in share YoY, but its units also saw a 266.9% YoY growth. The demand for curved monitors was high as it accounted for 25.4% of the overall monitors sold through eTailers. It was also not surprising that gaming monitors continued to grow given the popularity of games in China. 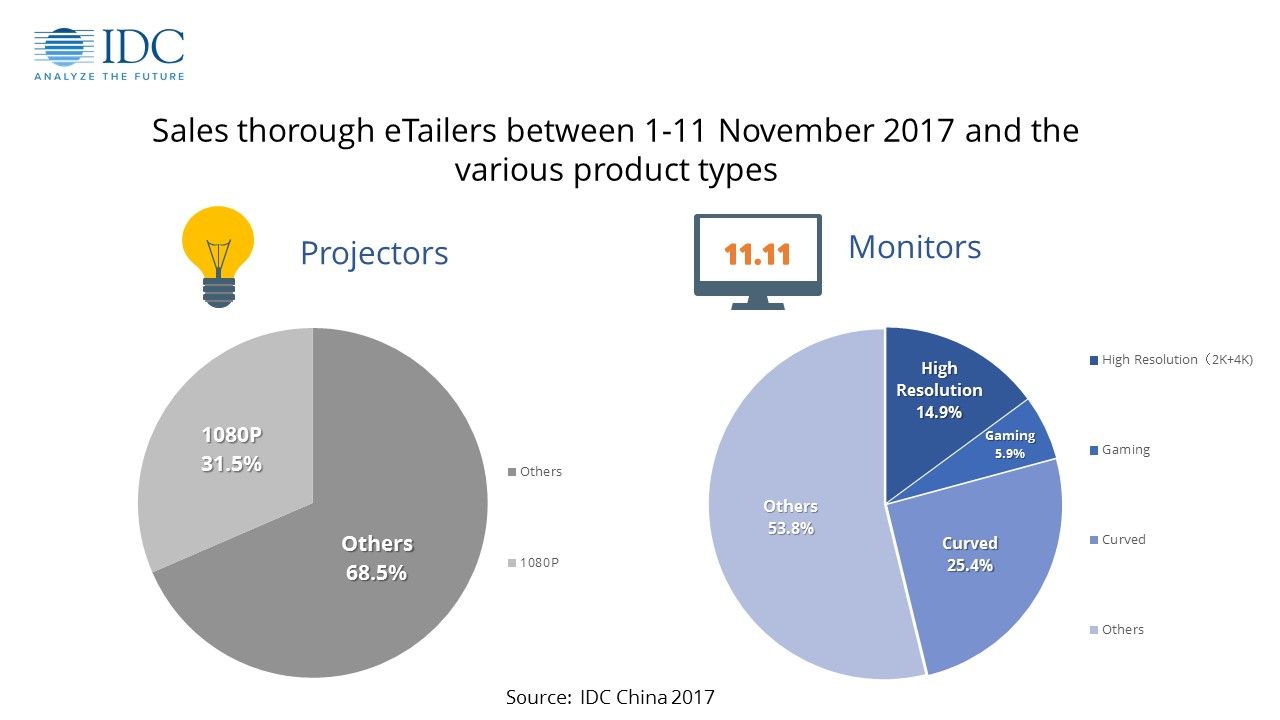 Samsung maintained its top position in the monitors market. HKC entered the top 5 brands this year, overtaking LG which was at the fifth-place last year. 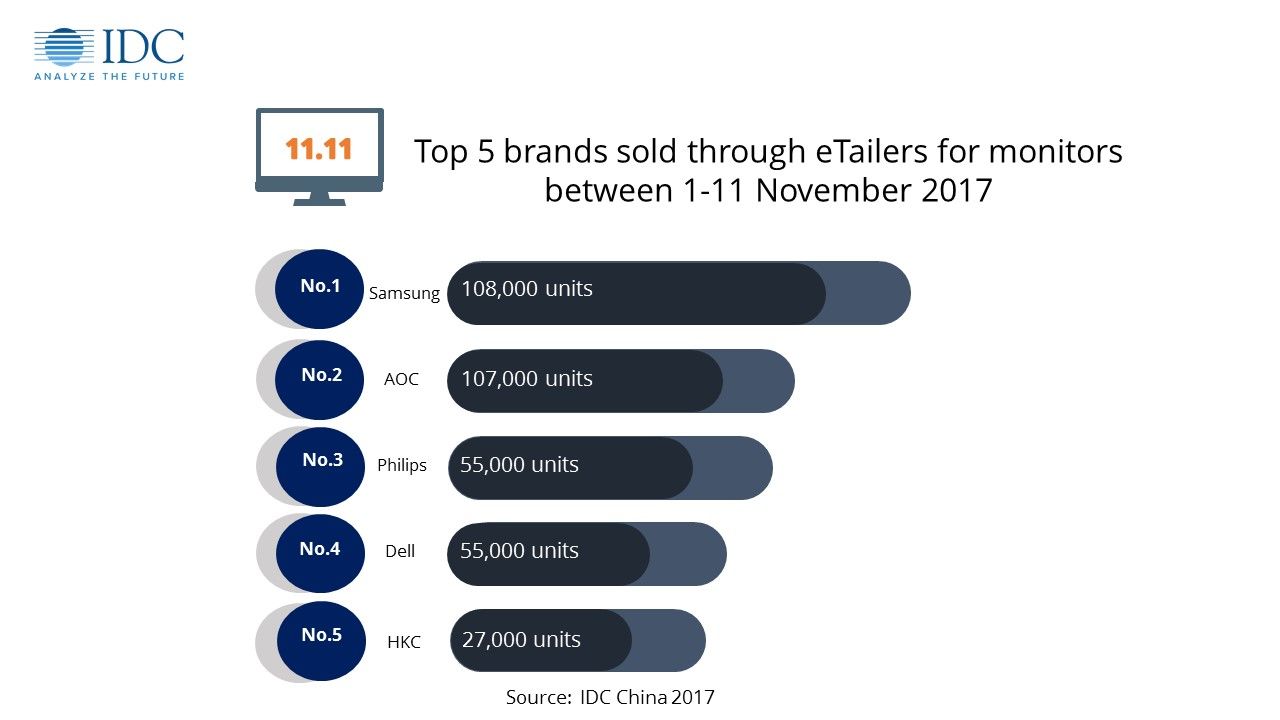 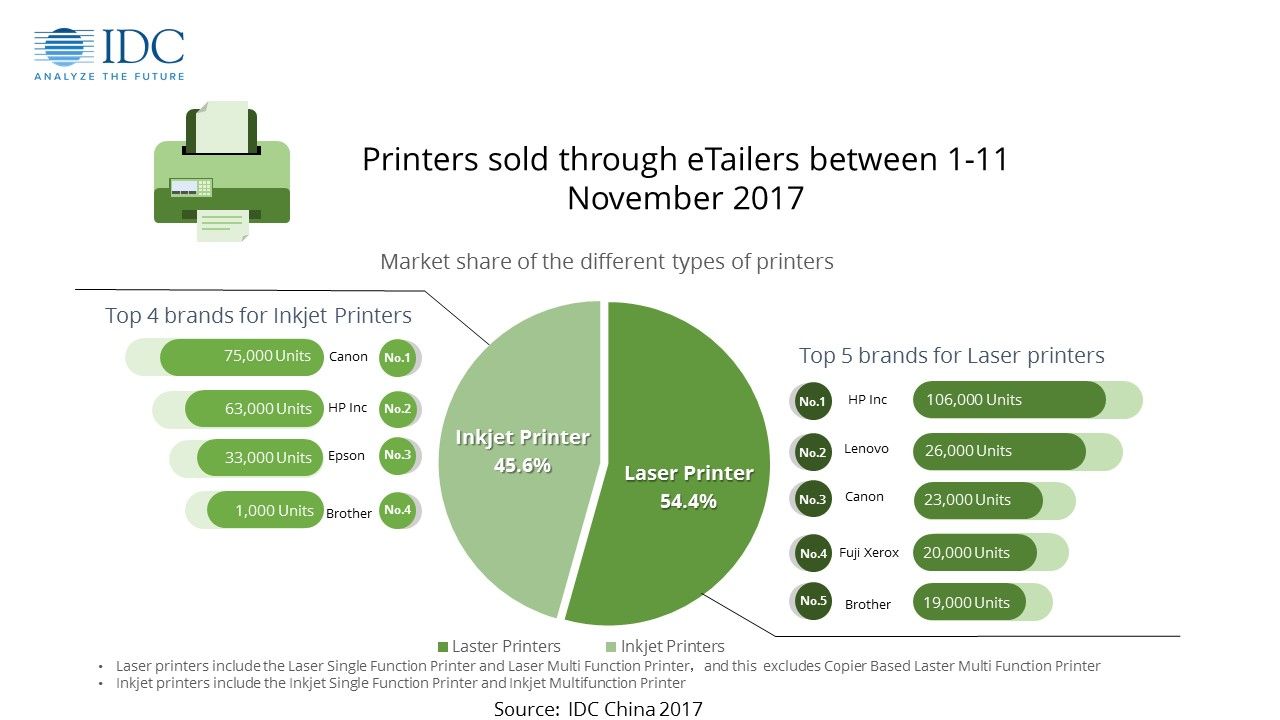 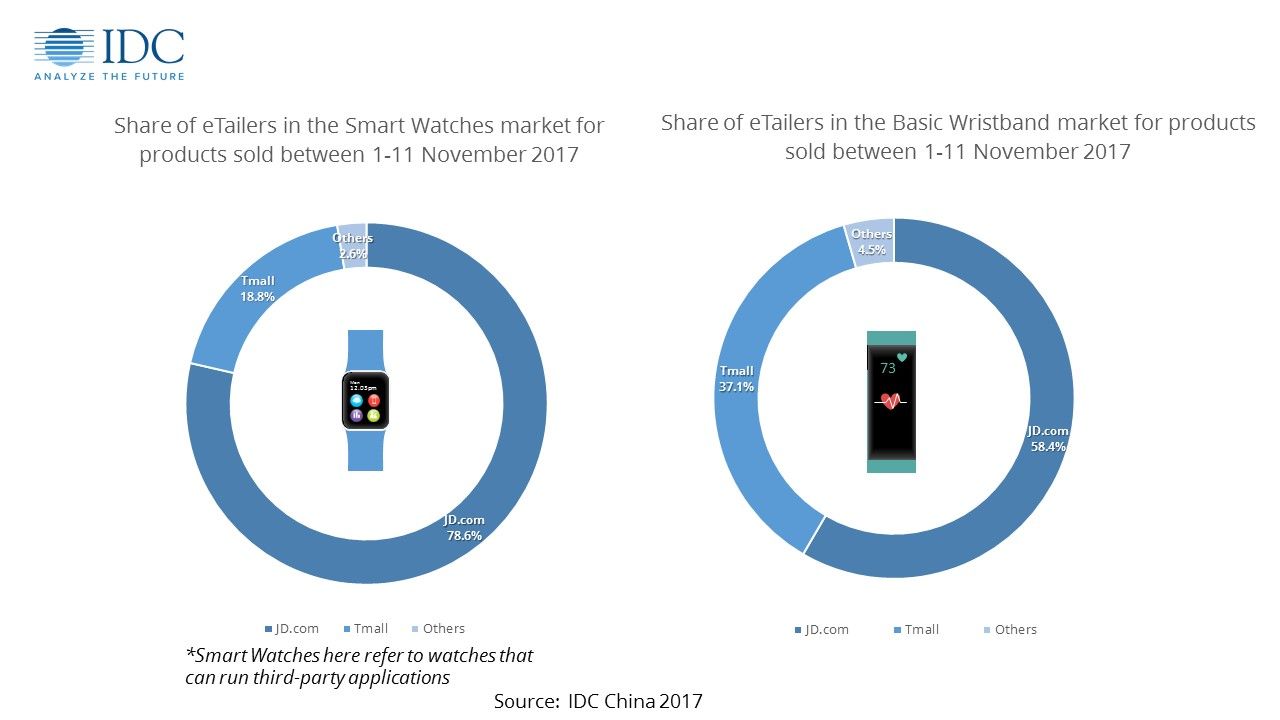 Singles' Day 2017 showcases that digital native enterprises such as Alibaba and JD.com are leading the way in business model innovations. These organizations are reshaping consumer experiences and expectations, driving the region toward the Future of Commerce. IDC defines The Future of Commerce as the application of 3rd Platform technologies and IAs to fundamentally change the way commerce is done between individuals, organizations and things; and deliver outcome-based products and/or services through business model innovation. To align value propositions with consumers' shifting value perceptions, organizations will do well to take inspirations from these digital natives – in how they structure, operate and monetize the value which their organizations deliver.