SARATOGA, Calif. – May 24, 2017 MATRIXX Software (http://www.matrixx.com/) today announced that in a recent national survey 58 percent of all mobile users, including those on unlimited plans, would change their mobile service today if they had more choice and control over how they used their data. In fact, if they could choose the best plan to meet their needs in the moment, over 50 percent would change their data plan at least once a month – some as frequently as every day. 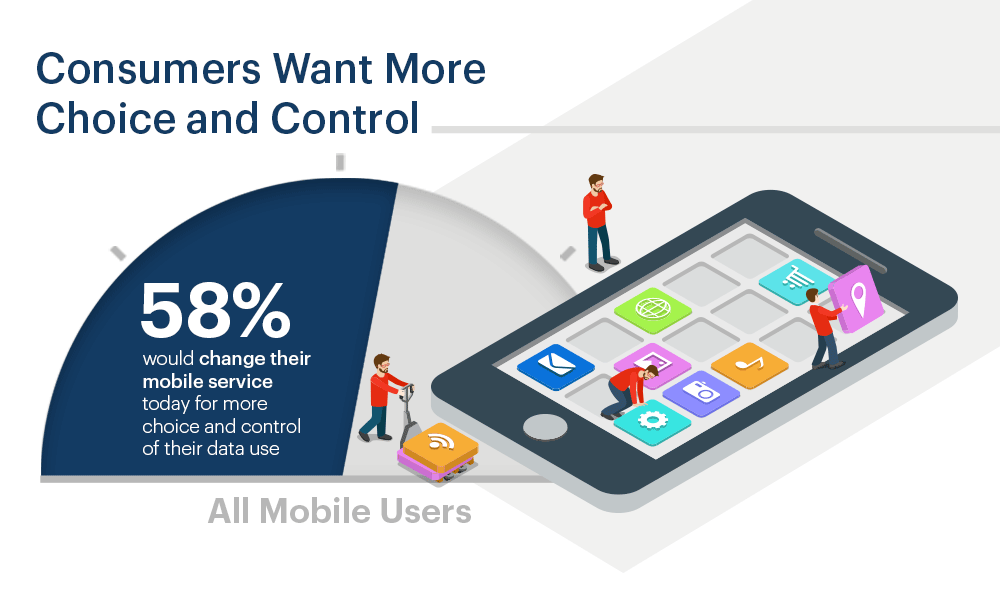 What’s more, respondents are willing to pay for greater control. Nearly half of all mobile users surveyed agreed to paying 10 percent more for unfettered access without throttled speeds or hidden costs, for only the apps they use most, such as Netflix, Spotify or Facebook.

These findings are in stark contrast to the current trends from U.S. wireless carriers, who have each rolled out new, unlimited offerings in 2017. Rather than a one-size-fits-all unlimited plan, three-quarters of survey respondents indicated they would like to personalize a data plan to their own unique needs, or only pay for data they use. Nearly one-third of all respondents say they are not satisfied with their options for buying data from their mobile carrier.

“It has been clear for some time that the telco industry is undergoing a seismic shift in the way it engages its customers and effectively competes in a digital economy, which looks very different than it did 10 years ago”

“It has been clear for some time that the telco industry is undergoing a seismic shift in the way it engages its customers and effectively competes in a digital economy, which looks very different than it did 10 years ago,” said Dave Labuda, Founder, CEO and CTO, MATRIXX. “Despite the recent unlimited plan wars, consumer preferences are trending towards individualization, where the customer can choose products and services they most want at the time and location they most need. Mobile data is now a necessity and consumers are demonstrating they are willing to pay for it, as long as it comes with greater insight, control and choice.”

Consumers also expressed a desire to better understand just how much data they use Sixty-five percent want better insight into how specific apps contribute to data consumption, with a full quarter of all respondents preferring a data plan they could structure around the apps they use most. Interestingly, over 50 percent of respondents currently on an ‘unlimited’ plan still choose to offload their data use to a Wi-Fi connection because of cost or speed concerns.

Along with wanting more insight and transparency into their own data usage, consumers expressed the desire for a high level of personalization:

In summary, the findings of this survey demonstrate that today’s current unlimited data plans are not meeting the needs or interests of mobile users. Consumers have indicated what they most want in their mobile service is value on their own terms, which includes choice, transparency and a level of control that allows them to personalize their plan to best fit their unique and immediate needs.

MATRIXX Software conducted the survey in May 2017 with 2,288 smartphone users, across the United States, ranging in age from 18 to 70 years old.