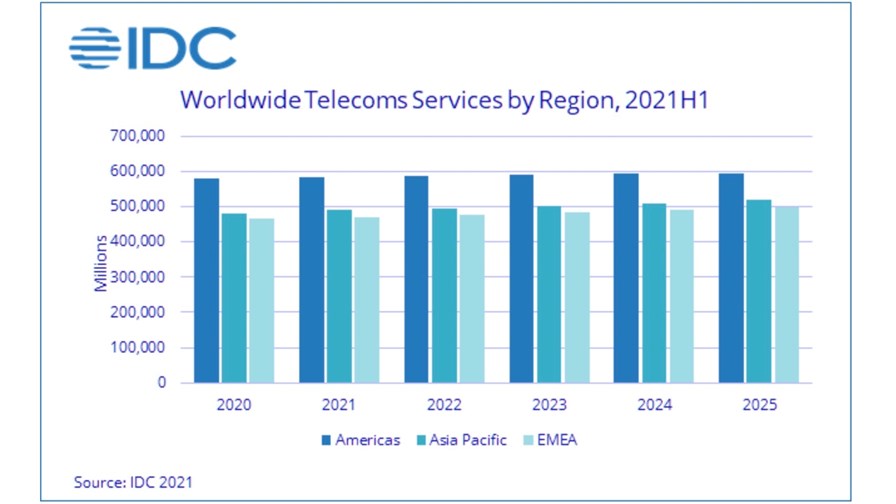 The global market for telecoms services (fixed, mobile and pay TV) is set to grow slightly, by about 1%, to hit $1,545 billion this year and then continue to grow during the next four years to top $1,600 billion in 2025, according to a new forecast form IDC (see chart above). “The fastest expansion is still expected in the Asia/Pacific region where the forecast growth rates have been raised because of the higher-than-expected growth in the Chinese mobile segment in H1 2021,” noted IDC in this press release.

AT&T and Verizon are delaying their C-band 5G services launches after the Federal Aviation Authority (FAA) warned that the launch of the services could interfere with the safety controls of some aircraft, The Verge reported. The operators had planned launches in December that will now be delayed until at least January. The C-band auction ended in February, raising more than $80 billion, with Verizon shelling out the most on licenses.

Ten new patent license deals helped InterDigital to report an eyebrow-raising 64% year-on-year increase in third quarter revenues to $143.5 million and a 138% increase in operating income to $36.8 million. “In this quarter, we’ve continued to build on our business momentum by expanding our customer base in the mobile and consumer electronic spaces. The wireless connectivity and video technologies we develop have never been more important,” said CEO Liren Chen. “We believe we are well positioned for future growth and are prepared to ensure that the value of our patent portfolio is recognized by those who benefit from our innovations.”

In the optical components world – a critical part of the industry that provides the foundations for 5G, fibre broadband, data centre connectivity and so much more – there is M&A action of note. Lumentum, which was involved in a bidding war with rival II-VI earlier this year to acquire Coherent (Lumentum lost), has struck a deal to acquire NeoPhotonics for $918 million, a move it says will expand its “opportunity in some of the fastest growing areas of the more than $10 billion market for optical components used in cloud and telecom network infrastructure.” Financial analysts at Raymond James, which tracks the optical market, stated in a research note to clients that this “is a great outcome for NeoPhotonics.” With the Lumentum offer pegged at $16 per share, NeoPhotonics naturally saw its share price rocket on Thursday by more than 38% to $15.94, since when it has dipped by a couple of cents. The news came as Lumentum reported fiscal first quarter revenues of $448.4 million and a net profit of $81.5 million: Its share price edged up by more than 3% to $88.20 on Thursday and gained another 4% on Friday to hit $92.00. For more insights into what the planned acquisition means, you can check out this comment by the team at research firm LightCounting, and keep an eye out for what the folks at Cignal AI have to say – any views expressed there will be educated and forthright.

Just as BT was announcing its latest mixed financial results on Thursday, rival Virgin Media O2 was also sharing its details for the three months to the end of September. It added 38,000 fixed customers to take its total to 5.7 million and grew its contract mobile customer base by 108,000 to take its total number of mobile connections to 41.6 million (though this includes 7.8 million machine-to-machine/IoT and almost 10 million wholesale connections as well as pre-paid and post-paid customers). The operator says its Gigabit broadband network – whether cable broadband or fibre – now passes 12.8 million premises, while its 5G services are now available in at least parts of 210 towns and cities. And the operator says it has started pilots for fibre upgrades to its cable broadband access lines, in line with its plan to switch to fibre only by 2028. Revenues for the quarter came in at £2.6 billion, roughly in line with a year earlier (if Virgin Media and O2 had been merged then). The operator reported a small net profit of £16.5 million compared with a net loss of £146.2 million a year ago. Full details can be found at the Virgin Media O2 investor relations site.