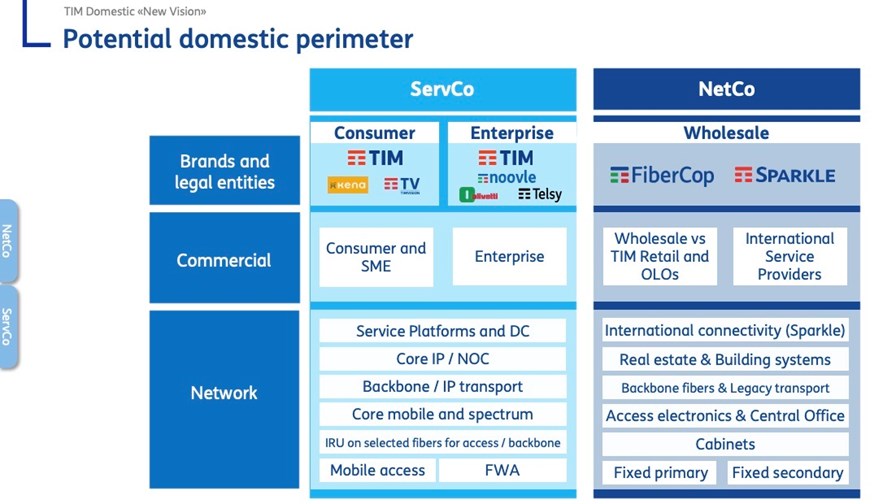 TIM (Telecom Italia), already flirting with one private equity suitor, has attracted the interest of another, CVC Capital Partners, as it considers its strategic restructuring options. But whereas KKR wants to buy TIM in its entirety, CVC has its eyes on a particular slice of the operator’s business.

TIM announced Monday morning that its interaction with KKR with regards to its €10.8 billion takeover offer is ongoing “in order to obtain information regarding the attractiveness, actuality and deliverability of the non-binding and indicative expression of interest” first announced last November. The TIM board announced earlier this month that it was ready to sit down with KKR to assess whether the offer was a superior alternative to the new ‘industrial strategy’ plan as devised by TIM’s new CEO Pietro Labriola and unveiled at the start of March. (See TIM agrees to takeover talks with KKR, but keeps its options open.)

But at the same time TIM noted that, late last Friday, it received from CVC Capital a “non-binding proposal for the purchase of a minority stake in a newco... which would include the activities of TIM's Enterprise division (i.e. connectivity and ICT services) in addition to those of Noovle, Olivetti, Telsy and Trust Technologies.” The operator noted the proposal will be scrutinized by the board.

The offer will give TIM food for thought. Under Labriola’s ‘industrial strategy’ plan, TIM would be split into two separate entities: NetCo, a wholesale company that would comprise FiberCop (its fibre access network unit) and Sparkle, its international network operation, and which could, if the stars aligned, be merged with Italy’s other national FTTP player, Open Fiber; and ServCo, comprising TIM’s consumer and enterprise services operations, its mobile network assets (access and core) and national IP and optical transport network assets, as well as its business in Latin America, TIM Brasil. The graphic above shows the domestic elements of NetCo and ServCo.

The enterprise part of the ServCo would include multiple digital service assets that TIM has bene building up, notably its cloud and edge services unit Noovle, cybersecurity specialist Telsy, secure communications services unit Trust Technologies, and IoT and enterprise IT specialist Olivetti: TIM has high hopes for growth in these parts of its business, in particular with Noovle, which has strong ties with Google Cloud. If ServCo had existed in 2021, the enterprise part of its would have generated revenues of about €2.7 billion, according to the operator.

CVC clearly sees growth potential here too, and while TIM didn’t provide any further details, Reuters reported over the weekend that CVC would be interested in taking a 49% stake in the ServCo enterprise unit if it could be carved out into a standalone operation and take external investment. That is a model with which TIM is already familiar, as FiberCop is already a standalone unit within TIM that has multiple external investors, including KKR (which holds a 37.5% stake).

The CVC offer could be attractive to the TIM board, as it would allow TIM to shore up its finances while retaining control of a key part of its business: Add that to the potential offloading of the NetCo operation into a joint venture with Open Fiber, and TIM’s future as an independent company in control of its own destiny (rather than as a unit of a private equity firm) starts to look more feasible and likely more attractive to the Italian government, which would have a final say in any major transaction that would impact ownership of a strategic national asset.