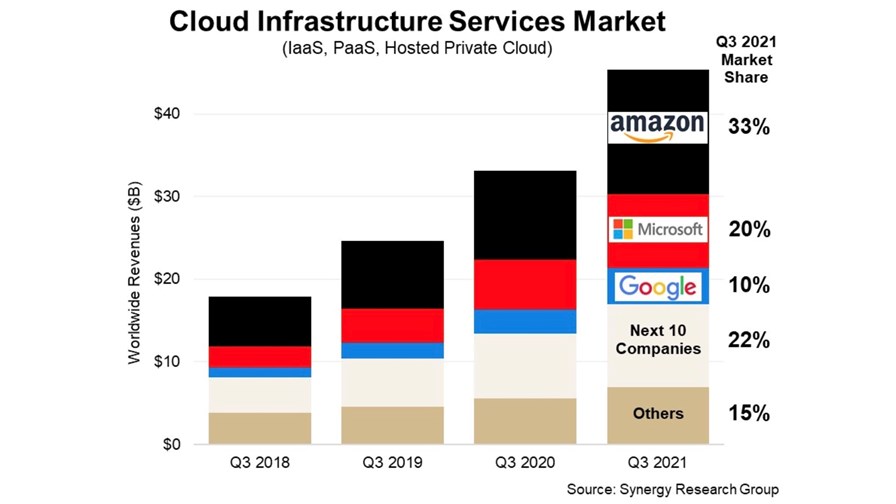 The company-formerly-known-as-Facebook attracted a lot of tech limelight late on Thursday, but other giants were making headlines too, and for more tangible reasons: Take Amazon Web Services (AWS), for example, a company that meets the cloud infrastructure and services needs of a multitude of enterprises around the world, and which grew its revenues by almost 39% year-on-year to $16.1 billion during the three months to 30 September, numbers that mean it’s still by far the largest cloud infrastructure services firm in the world, according to the team at the Synergy Research Group.

As ever, and as you’d expect, the ‘big three’ cloud giants – AWS, Microsoft Azure and Google Cloud – dominate the cloud infrastructure services market with a combined 63% of the sector in the third quarter (as the chart above shows). The total value of the market in the quarter was $45.4 billion, up an astonishing 37% year-on-year (when will these growth rates diminish?). In the past 12 months, the sector has been worth $164 billion.

But as John Dinsdale, a Chief Analyst at Synergy Research, notes, the big three aren’t mopping up all the market growth – the smaller players are also benefitting from the ongoing incredible appetite for cloud infrastructure. “Given their scale, ever-expanding worldwide presence and impressive revenue growth rates, it is understandable that Amazon, Microsoft and Google grab the most attention for their cloud activities. However, that makes it easy to overlook the fact that other cloud providers generated $17 billion in the quarter, a figure which grew by 27% from last year,” he notes.

And the key to ongoing growth and success for those alternative providers is to find a unique focus or market. “Providing companies are smart about targeting the right applications and customer groups, cloud can provide a broad and exciting range of growth opportunities” for companies other than the top trio, he adds.

For communications service providers, it’s going to be hard to look too far beyond the big three for many of the cloud infrastructure services they will need, as the scale and resources that AWS, Azure and Google command – as well as the edge resources they have developed that so suit the needs of many telcos – mean they tick a lot of boxes. But of course the telcos will, like specialists in other verticals, have very particular needs, which is where companies such as IBM might, in time, develop a niche play with a targeted effort such as its Cloud for Telecommunications. (See IBM unveils its Cloud for Telecoms and an impressive posse of partners.)